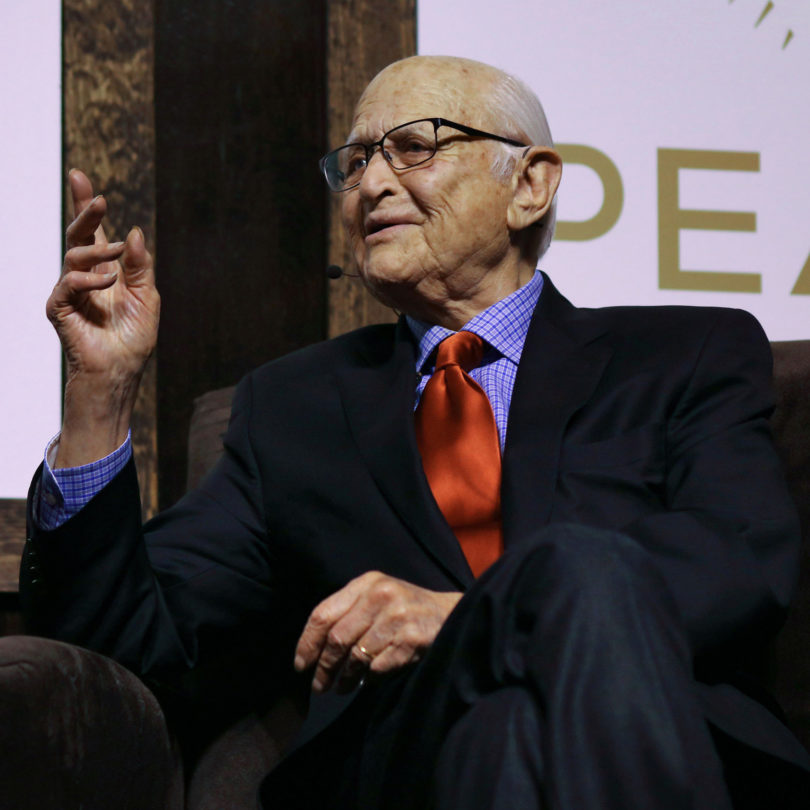 The Peabody Awards Board of Jurors have selected Norman Lear

Athens, Ga. – The Peabody Awards Board of Jurors has selected Norman Lear to receive an Individual Award and the Independent Television Service an Institutional Award for their contributions to storytelling in television. These honors are reserved for individuals and institutions whose work and commitment to broadcast media define and transform the field. The Peabody Awards are based at the Grady College of Journalism and Mass Communication at the University of Georgia.

Lear and ITVS will be celebrated at a gala event on Saturday, May 20, in New York. The event will be taped for a television special to air on both PBS and FUSION networks on Friday, June 2, at 9 p.m. EST and PST. Rashida Jones, a previous Peabody Award winner for “Parks and Recreation,” will serve as host. Supporting sponsors of the 76th Annual Peabody Awards Ceremony include the Emerson Collective, an organization focused on education, immigration reform, the environment and other social justice initiatives, and The Coca-Cola Co.

Norman Lear changed the face of television-and the faces. He revolutionized and democratized a traditionally timid, overwhelmingly white-bread medium with a collection of recognizable, risible characters whose racial and gender diversity was as unprecedented as their biases and brash opinions. From “All in the Family” and “Sanford and Son” to “Maude,” “Good Times” and “The Jeffersons,” all the Lear hits shared, to one degree or another, a grounding in the real, polarized America we all knew, not some fantasy nation crawling with dreamy genies, twitchy witches and friendly Martians. In Lear’s watershed shows of the ’70s, no topic was too touchy to tackle-not racial discrimination, not sexism, not homosexuality, not abortion, not even rape. Better than anyone working in television, Lear has created an influential body of work that politicized the personal, personalized the political and showed us ourselves in all our ridiculousness and nobility.

If any organization can claim a foundational place in the flourishing of documentary film over the past generation, it is the Independent Television Service. Conceived by independent filmmakers who saw a paucity of diversity in public media, ITVS was formed by Congress in 1988. Since then ITVS has had a broad transformative impact on the media landscape, particularly in public media. With more than 1,400 films funded and a staggering 32 Peabody Awards, ITVS’ output represents an accomplished range of work as rich as any broadcaster or funder. Landmark films within the Peabody canon include: “How to Survive a Plague” by David France; Marco Williams and Whitney Dow’s “Two Towns of Jasper”; Leslee Udwin’s “India’s Daughter”; and “The Invisible War” by Kirby Dick and Amy Ziering. These works remain as relevant today as when they were initially broadcast and have made an impact that is impossible to measure. At a time when public media is under political attack, there is no better time to recognize the vital contributions to public discourse and knowledge than that provided by ITVS.

About Peabody Awards
The Peabody Awards honor the most powerful, enlightening and invigorating stories in television, radio and digital media. Each year, Peabody Awards are bestowed upon a curated collection of 30 stories that capture society’s most important issues-known as the Peabody 30. Honorees must be unanimously chosen by the Peabody Board of Jurors, a diverse assembly of industry professionals, media scholars, critics, and journalists who each bring a unique perspective of what constitutes a story that matters. From major Hollywood productions to local journalism, the network of Peabody Awards winners is a definitive collection of society’s most important stories and storytellers, including winners that have ranged from Edward R. Murrow, Carol Burnett, and David Letterman to “The Sopranos,” “Sesame Street,” “Breaking Bad,” and “Serial.” The Peabody Awards were founded in 1940 at the Grady College of Journalism and Mass Communication at the University of Georgia and are still based in Athens today. For more information, visit peabodyawards.com or follow @PeabodyAwards on Twitter.

About Grady College
Established in 1915, the UGA Grady College of Journalism and Mass Communication offers undergraduate majors in advertising, entertainment and media studies, journalism and public relations. The college offers several graduate degrees and is home to the Peabody Awards, internationally recognized as one of the most prestigious prizes for excellence in electronic media. For more information, see www.grady.uga.edu or follow @UGAGrady on Twitter.

The following highlight videos of the winners are available online: