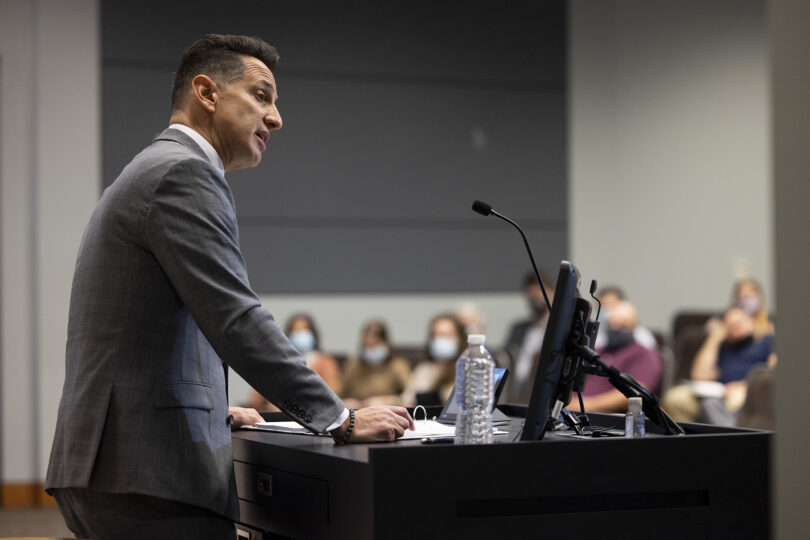 Those are just a few of the words Mark Lee Greenblatt, Inspector General, used to describe the work of his office during the Getzen Lecture on Government Accountability, held Nov. 8 as part of the University System of Georgia’s 2021 Ethics Awareness Week.

“Our job is to tell the truth,” Greenblatt said. “The measure of effective oversight, for me, is whether we have closely adhered to the three principles I outlined today: independence, fairness and objectivity, and the courage to tell the truth, no matter the consequences.”

Greenblatt expanded on those principles in his talk, “If You Want a Friend, Get a Dog: Oversight in the Age of Twitter,” particularly within the context of the report his office issued about the actions Park Police took to clear protesters from Lafayette Park in Washington, D.C., on June 1, 2020, prior to former President Donald Trump’s visit to a nearby church.

Inspectors general were created by Congress in 1978 to prevent and detect waste, fraud and abuse in their respective agencies. Now, there are 75 inspectors general throughout the federal government.

According to Greenblatt, this independence gives inspectors general the ability to select and conduct oversight without being affected by outside influences, and it gives stakeholders the assurance that their work is unbiased.

“Independence is the fundamental, core principle that allows IGs to operate successfully,” he said. “We have to be able to operate in a way that enables us to make our own decisions and draw our own conclusions.”

Fairness and objectivity, for Greenblatt, means that his office focuses on the facts and only the facts. He said that his staff makes sure the evidence is guiding their work and that their conclusions come from that evidence. They do not go into audits or investigations with preconceived outcomes in mind and gather information from various perspectives.

“We’re not hammers looking for nails,” he said. “We point out when an agency program is doing well or when an individual has not committed the misconduct that they’ve been accused of.”

By issuing reports—no matter what the findings are—Greenblatt’s office shares what they believe to be the truth. He pointed out that sometimes leads to uncomfortable moments.

“My office prepared the reports we believed the evidence demanded, and we released those reports when they were ready,” he said. “I knew my team had prepared reports to reflect the evidence they had gathered, so issuing them was really the only choice. That’s really the core of what an IG does. Tell the truth; don’t pull punches.”

Greenblatt began his tenure as the Inspector General for the U.S. Department of the Interior on Aug. 26, 2019, after being confirmed by the U.S. Senate. As Inspector General, Greenblatt leads a nationwide workforce of more than 270 investigators, auditors, evaluators, attorneys and support staff. Their mission is to provide independent oversight and promote integrity and accountability within the programs, operations and management of the U.S. Department of the Interior.

Greenblatt is the senior official responsible for providing oversight of more than 70,000 Department of the Interior employees and assessing the department’s diverse programs, which include roughly $10 billion in grants and contracts, $12 billion in natural resource royalties, 30% of the nation’s energy resources, Federal trust responsibilities to 573 Indian tribes and Alaska Native villages and stewardship of 20% of the nation’s lands.

The event also was part of the Provost’s Seminar Series on Academic Excellence and was named one of the university’s fall 2021 Signature Lectures. It was sponsored by the School of Public and International Affairs and the Department of Public Administration and Policy.