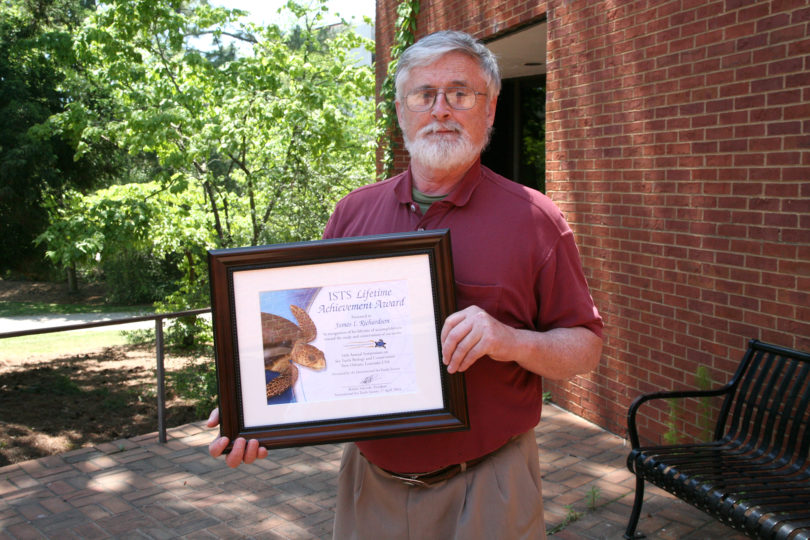 James I. Richardson, an instructor and undergraduate coordinator in the Odum School of Ecology, received the Lifetime Achievement Award from the International Sea Turtle Society at its 34th annual symposium on Sea Turtle Biology and Conservation in New Orleans.

Because of Richardson’s work, “the way we manage sea turtles on a global basis has evolved and become more effective,” said Sally Murphy, the society’s awards committee chair.

The ISTS is a global organization dedicated to ensuring healthy sea turtle populations worldwide. The lifetime achievement award, established in 2008, recognizes individuals who have had a significant impact on sea turtle biology and conservation throughout the course of their careers.

Richardson has been working with threatened and endangered sea turtles since 1964, when he started studying nesting loggerhead sea turtles on Little Cumberland Island. In 1986, he began a study of nesting hawksbill sea turtles in Jumby Bay Island, Antigua, West Indies.

He also has advised national and international government agencies and conservation organizations about sea turtle conservation. He was the first director of the Wider Caribbean Sea Turtle Conservation Network and has served as endangered species specialist with the state of Georgia, the U.S. Army Corps of Engineers, the U.S. Fish and Wildlife Service, the U.S. National Park Service and the U.S. National Marine Fisheries Service and as a scientific adviser for the Republic of Palau’s Division of Marine Resources.