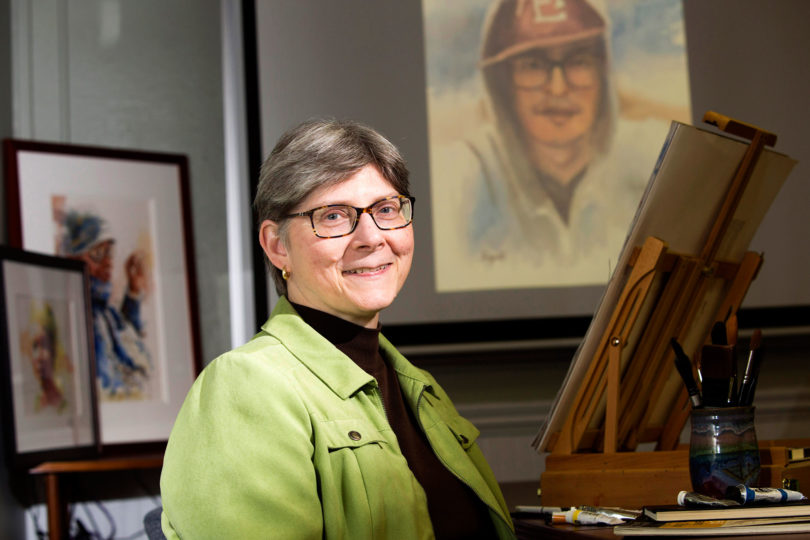 Rosemary Segreti didn’t have an art background when she started painting with watercolors. Now seven years later, she’s won several awards for her work and often paints during weekends and when she takes vacations from her job as interim registrar at UGA.

Segreti has been part of the UGA family for more than a decade. But when she’s not helping students resolve issues with class schedules or streamlining procedures to increase efficiency in dealing with everything from transcript requests to general registration, she’s an artist who specializes in portraits.

“My job is very demanding, and I know people take me to be a very serious person because of what I do,” Segreti said. “I think a lot of people will be shocked to find out I paint.”

Segreti’s journey with watercolors began after she moved her mother to Athens from their native New York. Although she was legally blind, Segreti’s mother wanted to take painting lessons at the independent living facility in which she was staying. Segreti’s wife joined her, and soon after that Segreti decided to give painting a shot as well. She was surprised to find she not only “really, really enjoyed” it but also was good at it.

“This cliche that claims if you’re left-brained you can’t be right-brained, I don’t really believe it,” said Segreti, referring to the stereotype that claims people are either logical and analytical (left-brained) or creative and artistic (right-brained). “I think you can be both.”

One of Segreti’s most recent paintings is part of the 49 Portraits Project, a national group of artists who are creating portraits of the 49 victims of the Pulse nightclub shooting in Orlando, Florida, in June. Begun by an Armstrong State University art instructor, the goal of the project is to hold an exhibit of the portraits and ultimately give them to the families of those who were killed.

“When I opened up the picture of all the 49 victims, I zeroed in on this one guy, Simon Adrian Carrillo Fernandez,” Segreti said. “I just looked at his eyes and thought this seems like a really sweet guy. My wife prompted me to do the portrait, but I thought this sounded like a really cool thing to do for the families of the victims.”

Painting Fernandez’s portrait was an honor, Segreti said, and she hopes it can provide his family with some bit of comfort after such a devastating event.

The portraits are expected to be delivered to the families around the one-year anniversary of the shooting in June, and digital versions are permanently archived on the website http://49portraits.com. Until Fernandez’s portrait can get to his family, where it belongs, Segreti keeps a copy of it as the lock screen on her phone.

“The portrait project reminds me of one drop of water falling in a pond,” Segreti said. “It started off as just one person, and then it ripples to 10 people in Georgia working on it, and then all of a sudden it’s people all over the country. This energy about helping people recover from such a tragic situation is very inspiring.”