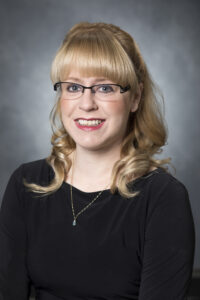 As a young child, one of Murdie’s favorite books on her uncle’s bookshelf was Kiss, Bow, or Shake Hands: How to Do Business in Sixty Countries, which described different cultures and how they interacted with each other.

“I was fascinated by it,” Murdie said, “so I chose an international affairs class to fit in with my work schedule.”

In that class, Murdie was struck by how the scientific method could be used to study social phenomenon and human behavior.

Thinking outside the box

As a nontraditional student with an infant, mentorship was incredibly important to her as she navigated her undergraduate studies. “I had one professor, Michael Suleiman, who was this constant positive influence early on in my life,” she said. “He pushed me to think about going into academia, but he said he wouldn’t write a letter of recommendation for me unless I thought about leaving the Midwest state that I was from. So, that got me to think outside of the box that I was in.” Murdie said she tries to emulate that combination of pushing her students out of their comfort zones while understanding they are people with other responsibilities.

Murdie joined the School of Public and International Affairs faculty in the fall of 2016. “UGA has a fantastic reputation of having this [international affairs] department where there are amazing scholars that are at the top of their field,” Murdie said. “I had co-authored with some of the people working here, and it just seemed like a place where there is a lot of energy.”

In addition to her roles in the department of international affairs, Murdie is the editor-in-chief of International Studies Review and co-editor of the University of Georgia Press Studies in Security and International Affairs Book Series.

In her research, Murdie focuses on non-governmental organizations (NGOs) and human security, asking the same questions now that she did as an undergraduate student. Namely, how can actors like NGOs make local human conditions better and alleviate suffering? She specializes in the behaviors in international NGOs and their interactions with states, local populations and intergovernmental organizations. She has published more than 50 articles and book chapters in journals such as Journal of Politics, British Journal of Political Science and International Organization.

For her, the most rewarding experiences are when she works with undergraduate and graduate students to produce research articles. “Academic articles are a kind of currency now, so to help a student get their first academic publication is probably the best feeling as a professor,” Murdie said. She and Ph.D. student Ryan Yu-Lin Liou recently published an article in Political Research Quarterly on the impacts of economic sanctions on human security conditions on the ground.

Murdie tells her students and policy professionals that keeping an open mind is critical to understanding international affairs and solving issues.

“[You have to] be willing to see things that maybe don’t fit the way you think the world works,” Murdie said. “Be open to looking at new research methods or new ideas that may seem strange or difficult to you at first glance. We’re all interested in making the world a better place, but to do that, we have to understand that it may not come in the package we thought it would.”