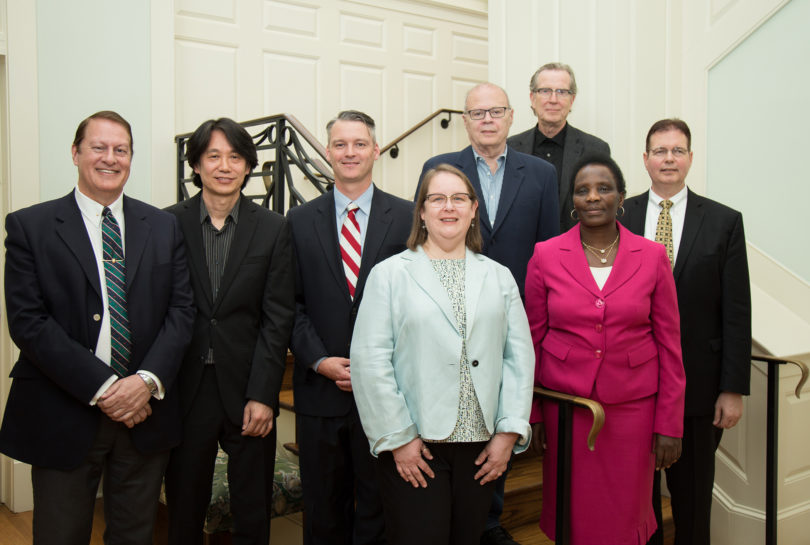 The annual event honors individuals, faculty and staff who have made outstanding contributions to the university’s internationalization. It honors those who advance international education through instruction, research and service through administrative and logistical support.

The 2016 honorees and their awards are:

Two UGA faculty were awarded the Richard F. Reiff Internationalization Award this year: Rose Chepyator-Thomson, professor of kinesiology in UGA’s College of Education, and Jessica Kissinger, professor of genetics in the Franklin College of Arts and Sciences and director of the Institute of Bioinformatics. The Reiff Award honors a tenured or tenure-track faculty member who has made major contributions to the overall internationalization of UGA.

Chepyator-Thomson’s teaching, research and service activities illustrate her passion for internationalizing the university. She founded and directs the annual Global Education Forum, hosted by UGA and now in its 10th year, whose mission is to promote cross-cultural understanding in a global context. The conference attracts internationally renowned scholars to UGA, and brings together faculty and students across disciplines and cultures to focus on a scholarly theme based in diversity and global development. Open dialogue on issues of race, social inequality and gender are encouraged during the conference. Additionally, she has developed kinesiology courses emphasizing globalism and diversity, and leads a study abroad program in her native Kenya.

Chepyator-Thomson’s research and publications are focused almost entirely on globalism and diversity, such as multiculturalism in teacher training for physical education, and African and global issues related to-and the interplay of race, gender and ethnicity in-physical activity and sport. She has received a number of awards for her globally focused activities, including national awards from other universities and organizations.

Kissinger was instrumental in establishing the Institute of Bioinformatics at UGA and has developed a network of international research and training programs to the benefit of students at UGA and abroad. In addition to collaborating on a massive genomics database, EuPathDB, with researchers in the U.S., U.K., Brazil and other countries, Kissinger has held training workshops abroad for STEM-focused graduate students in 15 countries, including Brazil, Canada, China, India, Morocco, Nigeria, Portugal and Taiwan. She also brings doctoral students to the U.S. for formal training in her lab to assist them in their research goals. Frequently these goals include training in state-of-the-art techniques to address specific health issues in the students’ native countries.

In addition to sustaining international grant funding for her research, training and bioinformatics projects, Kissinger serves as a Scientific Working Group member for the NIH’s West African International Centers of Excellence for Malaria Research. Her efforts have increased the international visibility and reputation of UGA and have resulted in successful international research collaborations.

Nathaniel Kohn received OIE’s Study Abroad Award, which honors faculty or staff members who have made significant contributions to the university’s study abroad efforts. Kohn is a professor in the entertainment and media department of the Grady College of Journalism and Mass Communication, and the associate director of the Peabody Awards.

Kohn was selected for his leadership in establishing and directing two of the most popular study abroad programs run by the Grady College: the Cannes Film Festival study abroad program, which is one-of-a-kind nationally and has been running for more than a decade; and the UGA Cannes Lions Festival of Creativity study abroad program. Through these two programs, he has provided UGA students with unique opportunities to engage with filmmakers, producers, directors, advertising executives and media directors from nearly every country, while also gaining rich cultural exposure.

SunKoo Yuh received the Mary Ann Kelly Open Arms Award, which honors UGA faculty or staff who have gone above and beyond their formal duties in facilitating the presence of international students and/or scholars at UGA. Yuh is a ceramics professor in the Lamar Dodd School of Art, in the Franklin College of Arts & Sciences.

An internationally recognized artist, Yuh fulfills an unofficial role as artistic and cultural ambassador of Korea to the School of Art and UGA. He has recruited many top students from Korea to Lamar Dodd’s undergraduate and graduate art programs, and created an opportunity for UGA students to visit Korea. Yuh’s efforts have made it possible for a growing number of international artists to visit the School of Art for lectures, demonstrations and even collaborative projects with students. In addition, Yuh has been instrumental in plans to bring Korean students, scholars and artists to UGA’s residential center in Cortona, Italy.

Three additional awards were presented to those in the UGA community making major contributions to the programs housed in UGA’s international residential centers: UGA Costa Rica presented its Costa Rica Adelante Award to Ron Pegg, associate professor in the food science and technology department in the College of Agricultural and Environmental Sciences; UGA at Oxford presented its Friends of UGA at Oxford Award to Paul D. Welch, director of undergraduate student services in the School of Public and International Affairs; and UGA Cortona, Italy, presented its Dedicato a Cortona Award to Alex Murawski, professor of graphic design in the Lamar Dodd School of Art in the Franklin College.