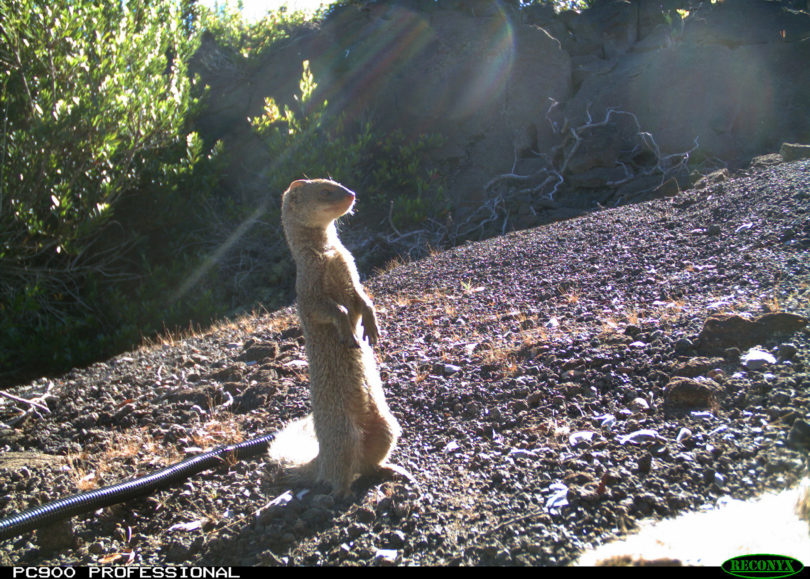 A mongoose basking in the sunlight at the "scrub" site in Hawaii Volcanoes National Park.

Aiken, S.C. – Researchers from the University of Georgia have found that invasive species on Hawaii Island, or the Big Island of Hawaii, may be especially successful invaders because they are formidable scavengers of carcasses of other animals and after death, a nutrient resource for other invasive scavengers.

The team of researchers from UGA’s Savannah River Ecology Laboratory is the first to study vertebrate and invertebrate scavenging of invasive species on an island.

The state of Hawaii has the highest number of endangered and threatened native species in the U.S., and this study, published recently in the journal Ecosphere, could inform efforts to manage invasive populations in Hawaii and similar island ecosystems threatened by invasive species.

“It is essential to know where nutrient resources flow in a highly invaded ecosystem,” said wildlife ecologist Olin E. Rhodes Jr., director of the SREL.

“We wanted to see what was eating the invasive species that have significant populations on the island,” said team leader Erin F. Abernethy, an alumna of SREL and UGA’s Odum School of Ecology, now at Oregon State University. “And, we wanted to identify the percentages of carcasses eaten by invasive vertebrates and invertebrates.”

What they found, said Abernethy, “indicates a positive feedback loop. The more non-native species invade an island, live and reproduce and die, the more nutrient resources they create for other invasive species through carcasses-synergistically refueling off of one another and further invading the ecosystem.”

The team set up 647 individual invasive carcasses of amphibians, reptiles, small mammals and birds on camera traps across three diverse landscapes on the island.

A small percentage of the carcasses were also fitted with transmitters to allow the researchers to see if they were consumed after being removed from the camera’s view.

The camera images revealed significant scavenging by invasive vertebrates. Although scavenging by vertebrates was only 10 percent higher than that of invertebrates, the researchers were surprised at their lack of discrimination about what they scavenged.

“We anticipated that vertebrates would quickly find and remove large carcasses, but we discovered that the vertebrates were skilled at acquiring all types of carcasses,” Abernethy said. “They were adept and highly efficient at finding the smallest of resources-locating carcasses of coqui frogs, a small frog native to Puerto Rico-and geckos that only weighed a few grams, before invasive invertebrates had the opportunity to get to them.”

Abernethy said that despite their small size, these animals represent a significant food resource. Previous research on the island indicates coqui frogs number 91,000 per 2.47 acres.

Invasive vertebrates removed 55 percent of the carcasses in this study. The mongoose and the rat proved to be the most formidable scavengers. They removed the most carcasses and were observed more frequently. The mongoose was the only species in the study to participate in cannibalism-feasting on mongoose carcasses.

The invasive invertebrate scavenger community, which included yellow jackets and fly larvae, removed 45 percent of the carcasses. This left no carcass resources for the native species on the island-the owl and hawk. Few in number on the island, these animals were not seen by the team during the study.

Further information about the study, including differences in scavenging activity among the three sites, can be found at http://onlinelibrary.wiley.com/doi/10.1002/ecs2.1496/full.