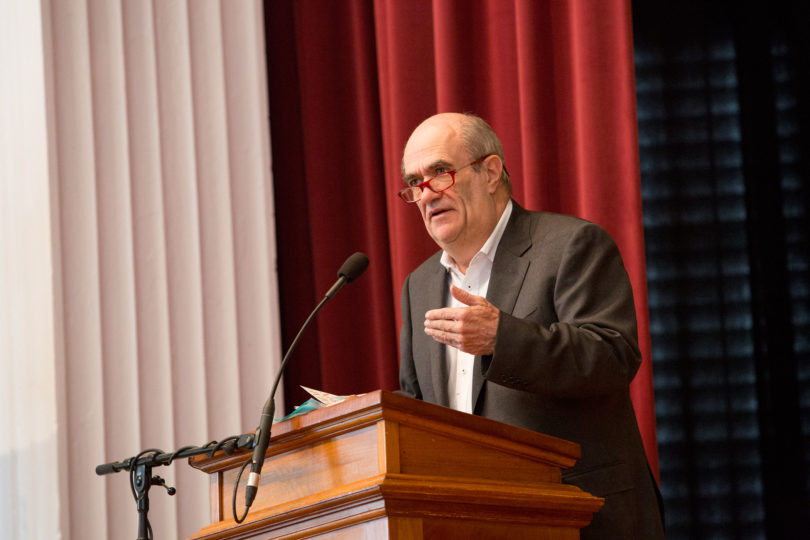 Irish writer Colm Toibin’s novels are inspired by his own life, including the memories of his mother and aunts and the homesickness he felt while teaching and living in Austin, Texas.

“I just couldn’t read people, and I went around in a state of deep puzzlement all the time wondering what was going on,” Toibin said. “In the middle of all this, I began to miss Ireland. I began to miss things I don’t even like. I’d wake in the morning and think, ‘I wish I was home and it was an ordinary day.’ ”

Toibin spoke about influences on his writing to a near capacity crowd March 16 at the Chapel during “Staying Home, Leaving Home: Ireland and America.” Sponsored by the Willson Center for Humanities and Arts, the talk also was part of the Signature Lecture Series.

Toibin’s 2009 novel Brooklyn, which follows the journey of Eilis Lacey as she immigrates from Ireland to Brooklyn in the early 1950s, leaving her home and family for the first time, touches on nostalgia for what’s left behind and the effects of homesickness. Brooklyn was adapted into a screenplay and became an Academy Award-nominated film in 2015. Toibin said it was “a painless experience” and spoke about the differences between the book and film.

“In the book, the reader spends his time imagining. If things are too clearly spelled out for you dramatically, especially at the end, you feel almost cheated,” he said. “What they did at the end [of the film] was spell out something that I had left to the reader to imagine in the book, and I think that might be the difference between the two forms.”

Sometimes, the difference is in the details.

“You don’t have to say what color someone’s dress is,” Toibin said. “You simply put the camera on the dress.”