Ben Cecil’s own study abroad experience as a student at UGA was a transformative experience. He is now the assistant director of the international student life department in the Division of Student Affairs. (Photo by Dorothy Kozlowski/UGA taken in January 2020) 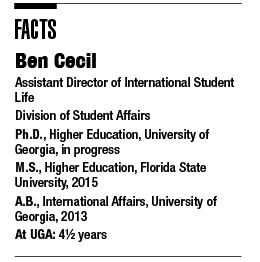 For Ben Cecil, assistant director of the international student life department in the Division of Student Affairs, the responsibilities of his position perfectly blend his passions—international education, community building and travel.

Cecil, who studied international affairs at the University of Georgia, said his undergraduate experience as a resident advisor with University Housing as well as his time studying abroad with UGA at Oxford were transformative experiences that set him on his current career path.

“I went on this program and realized—wait a minute—there are people who do this student affairs work in a study abroad/international affairs context,” he said. “I had an ‘a-ha’ moment and realized that it was what I wanted to do.”

Cecil arrived back in the states and began a graduate program in higher education at Florida State University. Keeping his new career path in mind, he held several student affairs positions before breaking into the competitive area of international education.

During his post-graduation job hunt, Cecil came across a “serendipitous” position located in his old stomping grounds of Athens.

Athens has surpassed Cecil’s expectations the second time around. He said that the city feels more like home now than it ever did before.

“It’s startling, in a good way, that I enjoy Athens far more as an adult than as a student,” Cecil said. “ I loved it then, but I’ve been able to form a community on campus as a working professional and off campus, too. It’s been a completely different experience.”

One place that Cecil built relationships was at a local gym. Since losing nearly 150 pounds a few years back, he tries to maintain a healthy lifestyle by getting up early to exercise at CrossFit Liberate.

“I do a lot in terms of being active, outdoors but also at the gym, so I spend a lot of time with the people I work out with,” he said. “I also do yoga at a local studio, so exercising is where I’ve found so much of this community.”

Community support is something that he not only values for himself but also aims to provide for UGA’s (sometimes homesick) international students, as well.

The first time Cecil meets a new group of international students is usually at orientation. In addition to providing support with tasks like setting up bank accounts and finding grocery stores, his office works hard to provide outlets that help students feel less alone on the university’s large campus.

“We do a lot of small group activities, a lot of team building and a lot of social events in the evening,” he said. “We do a good job of providing content in conjunction with many campus partners, but we realize that information needs to be balanced with the chance to connect with others. We want these students to build community early on so that they don’t feel so alone in their completely new environments.”

The importance of community is often a recurring theme at the international program’s graduation, where every student is given a chance to speak about their accomplishments. Hearing about how these students overcame the challenges of a new country to realize their educational goal is one Cecil’s favorite parts of the job.

“Hearing these students speak is a really good reminder of our impact,” he said. “I’ll recognize them from orientation, and it’s like seeing two different people because they’ve grown in their independence and self-confidence. It’s a really humbling reminder of how brave these students are.”