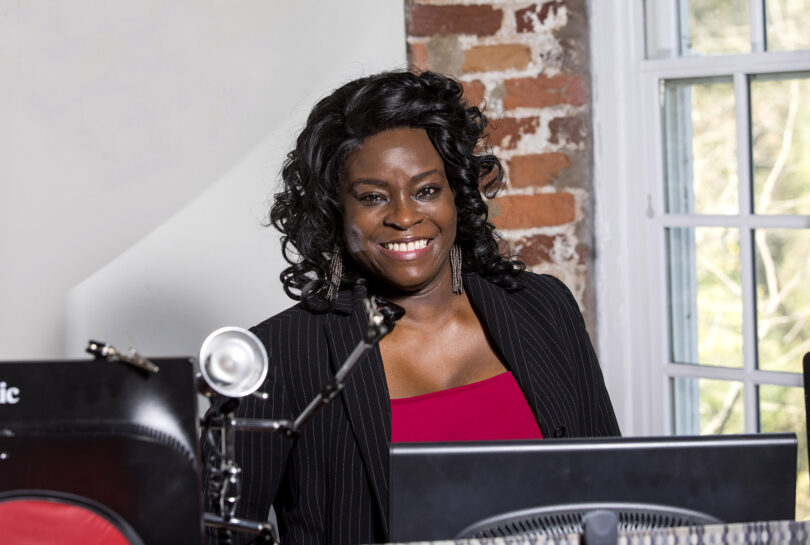 Teresa Payne strives to to make learning accessible to everyone in the School of Social Work. (Dorothy Kozlowski/UGA)

Teresa Payne grew up in a home that had no computers.

“The closest thing I had to a computer was a calculator,” she recalled of the days before personal computers were commonplace. She spent a lot of time walking to the library, which was more than a mile from her home.

Today, the memory of those walks keeps her motivated to make learning accessible to everyone. Now, the director of information technology for the School of Social Work ensures that students, faculty and staff always have working PCs, resources and support.

A Career in technology

Payne entered the University of Georgia as a math major, never dreaming of a tech career. She worked at least two jobs a semester to make ends meet. One of her student jobs on campus exposed her to a minicomputer system called Cyber 18/30, manufactured by Control Data Corporation. 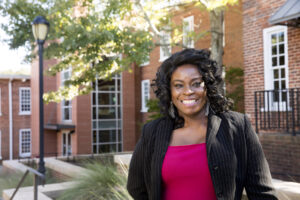 Teresa Payne is the director of information technology for the School of Social Work. (Dorothy Kozlowski/UGA)

“I came to UGA majoring in math, but that student job and my computer science classes began an array of technology introductions and milestones for me,” she said.

Payne went on to earn a degree in computer science in the early 1980s, when women were still a rarity in the field. “It was difficult finding a place in the industry, mainly because I think mostly males were being hired at that time,” Payne said. “I can remember interviewing and getting responses after the interview that just said I did not ‘fit the niche.’”

She finally landed a position setting up data centers for a large corporation. She became the youngest and only Black female technical lead. Payne wasn’t bothered. With four brothers, “I was just used to being around guys,” she said. Her friends called her a “trailblazer.”

Eventually Payne moved back to Athens, married, raised a family and found a demand for her skills at University Computing and Networking Services, the precursor to Enterprise Information Technology Services. She managed UGA’s first public Macintosh lab and facilitated the adoption of educational technology. She also fervently promoted the utility of the World Wide Web in its early days.

“I was telling everybody about it because it was exciting for me,” Payne said. “It was knowledge and power right at our fingertips … that was something I wanted to expose everyone to as much as possible.”

Payne created an introductory course to the internet, “Internet 101,” which she taught at Athens Technical College in the evenings, and then later taught a desktop publishing course called Introduction to PageMaker.

In the early 2000s, Payne teamed up with a nonprofit agency called the Institute for Community and Organizational Development. ICOD received a $400,000 grant over a three-year period to address the digital divide in underserved populations. Payne set up computer labs in local congregations and community organizations throughout northeast Georgia for a project called NetSpan. Later she offered technical support and training for an additional ICOD project called the VISTAS Center for the Blind and Visually Impaired.

As an IT director in higher education, Payne strives to offer cutting-edge technology.

“When I see there is not an affordable solution, I try to create one. Also, I look for ways in which technology can improve learning and the quality of life,” Payne said. “I want our constituents to be exposed to various technologies and solutions so they will have options and resources to accomplish their goals.”

More recently, she was instrumental in orchestrating a successful funding proposal for the School of Social Work’s purchase of its first simulation training modules—before the pandemic increased the use of remote learning. The modules will incorporate simulation therapy to help future social workers safely practice competencies and communication skills with virtual clients.

But Payne said one of her greatest assets, hands down, is her team.

“I have been fortunate to work with a team of colleagues who are dedicated to service, excellence and collaboration,” Payne said. “None of the various projects or ideas that I have come up with could have been implemented without them.”

For students who want to go into the technology field—for women in particular—Payne said to go for it.

“If you’re technical, if you’re analytical, and you’re a woman, you should be in the field, if that’s where you want to be,” she said.

In the technology arena, work sometimes follows you home, but Payne believes it’s important to maintain a healthy work-life balance. When she isn’t surrounded by technology, she spends downtime dancing, singing and traveling.

“Probably about a month ago, I got some new tap shoes, and I plan to start tapping soon,” Payne said. “This past March, I started to garden, so I’ve been planting quite a few things and learning more about gardening and nature.”

Payne said no matter what, she plans to continue learning, incorporating technology and serving the community. She is currently a board member for Athens Boys and Girls Club. In the past, she has served on the board for the Athens Habitat for Humanity and mentored in the Clarke County School District and at UGA.

“I’ve been really fortunate to have grown up alongside the technology movement,” Payne said. “I’ve been exposed to many generations and versions of technology. … The rate of change has been extraordinary technology-wise, and otherwise, and that’s a good thing.”