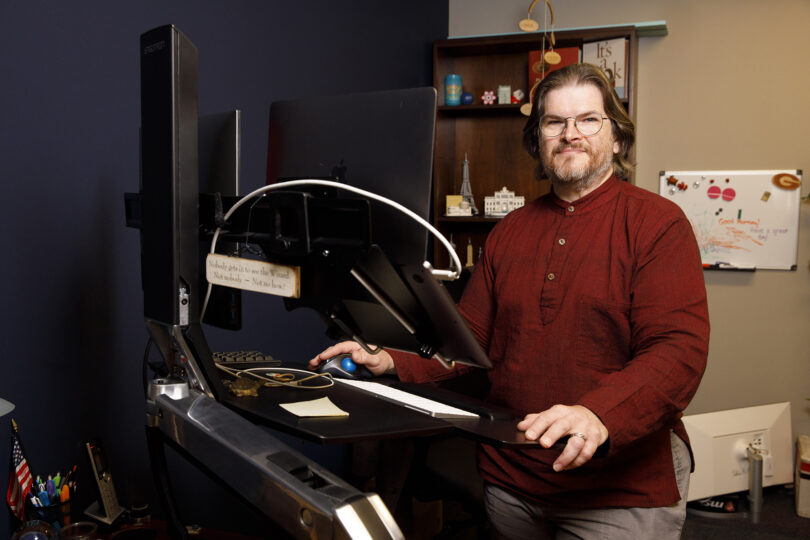 Lee Cornell is the IT director in the College of Environment and Design. (Peter Frey/UGA)

He remembers sitting in a family friend’s garage with his father in front of a large workbench covered in IBM and Tandy TRS-80 systems in various states. Here, Cornell did repairs as the adults stepped back and let him “play.” Every now and again, the adults would make a suggestion, helping Cornell see where he went wrong.

As such, Cornell grew up with computers and began working with them in the early ‘80s.

Now, Cornell is the IT director in the College of Environment and Design.

As the son of a Bell South programmer, technology was always integrated into Cornell’s life. His first computer was something he had to put together himself, and his first video games were games he had to write.

His responsibilities as IT director vary depending on the day, but generally, Cornell’s job is to make sure “everything is working,” including things like the printers and copiers.

The day before classes start, Cornell is usually busy conducting server checks, making sure they’re updated and ready for the new semester. Much of his work happens on the weekends so that faculty, staff and students can work as effectively and efficiently as possible during the week.

Most recently, Cornell took the time to reorganize the spaces within the College of Environment and Design in light of the COVID-19 pandemic.

The college began planning for the fall semester in June. As soon as they realized that everyone would need to be at least 6 feet apart during the semester, Cornell got to work.

“I moved every piece of furniture in every classroom in all four of our buildings,” Cornell said. “It was a lot of just rethinking how we’re using the space. … It was fun. It was mentally stimulating.”

He was delighted to help. Cornell said his enthusiasm for taking the time to rearrange the spaces came from the opportunity to help the college’s faculty, staff and students.

“The motivation was trying to make as normal, as typical, as usable and adaptable a space for our faculty and students as possible, because it’s going to be a weird year,” he said.

In fact, the people he helps are one of Cornell’s favorite aspects of the job. He enjoys the period of time when everyone is settled into a routine, during the second or third week of the semester.

“Seeing the students settled into their space spread out with their drawing or their craft materials to create a model and laughing and playing music, and teachers lecturing and laughing alongside of them—it just works,” Cornell said. “There’s a sense of fulfillment to see it [after] months of planning, weeks of constant going and setting up and rearranging and then just sitting back and watching it happen.”

Technology is an integral part of Cornell’s job as IT director. But when Cornell leaves campus, he wants “nothing to do with” computers.

Avoiding working with computers after hours has been especially challenging during the pandemic, a time when connecting with friends is often done online.

“In my spare time, I like going on hikes and taking the dogs for walks and beekeeping and gardening and kayaking and all the outdoorsy stuff that’s disconnected from everything,” he said.

Soon though, Cornell will be approaching retirement. He’s set to retire at 54, and in addition to enjoying more outdoor activities and traveling, he hopes to be able to train his replacement at some point.

“I’ve come to love this quirky little college that I work in, and I want them to continue to grow and thrive and succeed,” Cornell said. “Part of that is finding and training my replacement.”

For now, Cornell said he enjoys the satisfaction he gets from his position at UGA, and the fulfilling work is what keeps him going.

“My motivation is seeing that moment when the end user gets it—when they realize that the problem they’ve been struggling with isn’t as deep as they thought,” Cornell said. “And, yeah, a lot of times just turning it off and on again will fix everything.”