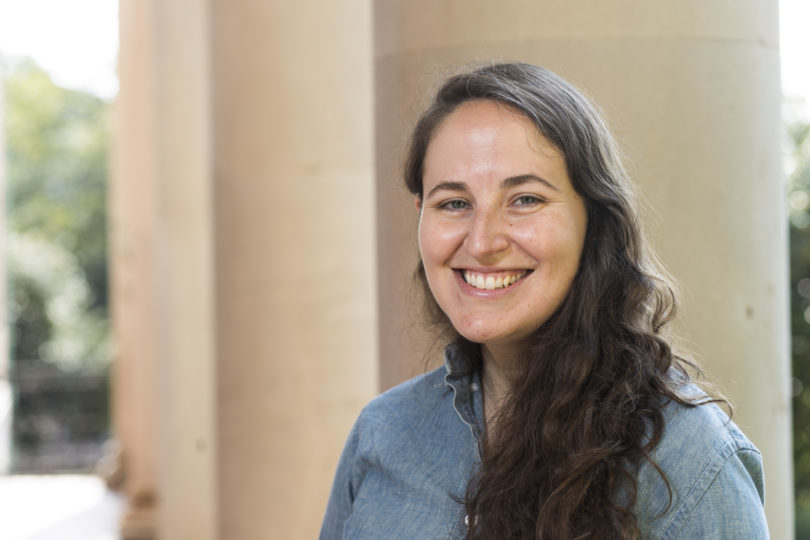 Where did you earn degrees and what are your current responsibilities at UGA?

I earned my Bachelor of Arts degree history and Bachelor of Arts in music at the University of Colorado at Boulder in 2004 and my Ph.D. from Princeton University in 2011. I’m currently associate professor and director of undergraduate studies in the department of history, which is part of the Franklin College of Arts and Sciences.

When did you come to UGA and what brought you here?

I got here in 2012 and was excited about the music scene in Athens, about getting to know the South and about working at a state flagship like the one I’d gone to as an undergraduate. Also, when I first visited UGA for my campus interview, it was February and everyone was complaining about how cold it was. I think it was like 40 degrees. After living in New Jersey for six years, I was on board with living in place where people thought 40 degrees was too cold.

I’m always excited to teach the history of the Middle Ages and the history of Christianity and society from Constantine to Luther. The medieval period is full of surprises; it’s weird in ways you wouldn’t expect and very similar to our experiences in ways you wouldn’t expect. And the students who sign up have a great mix of interests. They come to the Middle Ages via “Game of Thrones,” actual gaming, Christianity, Islam, Monty Python, or all-around history geekiness. It makes class discussions really multi-vectored.

My research and writing have won some prizes and internationally competitive research fellowships, and that’s partly because the department of history is so supportive of the research of its faculty. I’m also really appreciative that the faculty in the department of religion have let me audit Hebrew and Arabic classes with them so that eventually I can work with early medieval texts that aren’t just in Latin. And I’ve also been happy with an ongoing monthly lecture series that I created with my colleagues in 2015; it’s called Lunchtime Time Machine, and it’s geared toward undergrads of all majors. We’ve had a lot of fun with it. Students eat free pizza while hearing history faculty dig into topics like “How did ancient love spells work?,” “What was medical racism?” and “Was there a Shark Week before TV?”

How do you describe the scope and impact of your research or scholarship to people outside of your field?

The history of the early Middle Ages basically starts with the end of the western Roman Empire, so it’s a history of how societies were both deliberately and non- consciously changing the ways they worked. It’s a time period that constantly calls our sense of scale in question: Did everyone think that the Empire was ending? What did “the Empire” mean to different groups in the first place? How did events in Constantinople or Damascus or Alexandria continue to reverberate across the Mediterranean? How could seemingly small things, like stories or farm animals, affect the way that people worked or made policy decisions? How could very large things, like a royal government or the diffuse culture we call Christianity, change their way of seeing the world? My research has pointed to some of the less visible forces that altered the politics and ethics of societies in transition (like literature and domesticated animals). It also showcases their cleverness, subtlety and sense of humor. We have totally underestimated the Dark Ages!

There’s a constant feedback loop there. One example is that my research on cognitive practices in early medieval culture gave me the idea for a First-Year Odyssey Seminar that uses medieval mnemonic and meditational techniques to help incoming students approach the art of studying and thinking with “alternative” (i.e. very old) technologies. And my current work on environmental and agrarian history has led me to incorporate more topics on rural life into the classroom—since something like 90 percent of the medieval population were farmers!

On the flip side, writing lectures for undergrads has made me a better writer; it’s really hard to explain things to nonexperts without oversimplifying things, but if the pacing is right, students can handle very complex material. Readers respond in the same way. And my students always ask such good questions in seminars; they help me see my research in new ways. I rewrote a whole chapter in my first book on the basis of one fascinating class discussion about the meanings and uses of land in the Middle Ages. 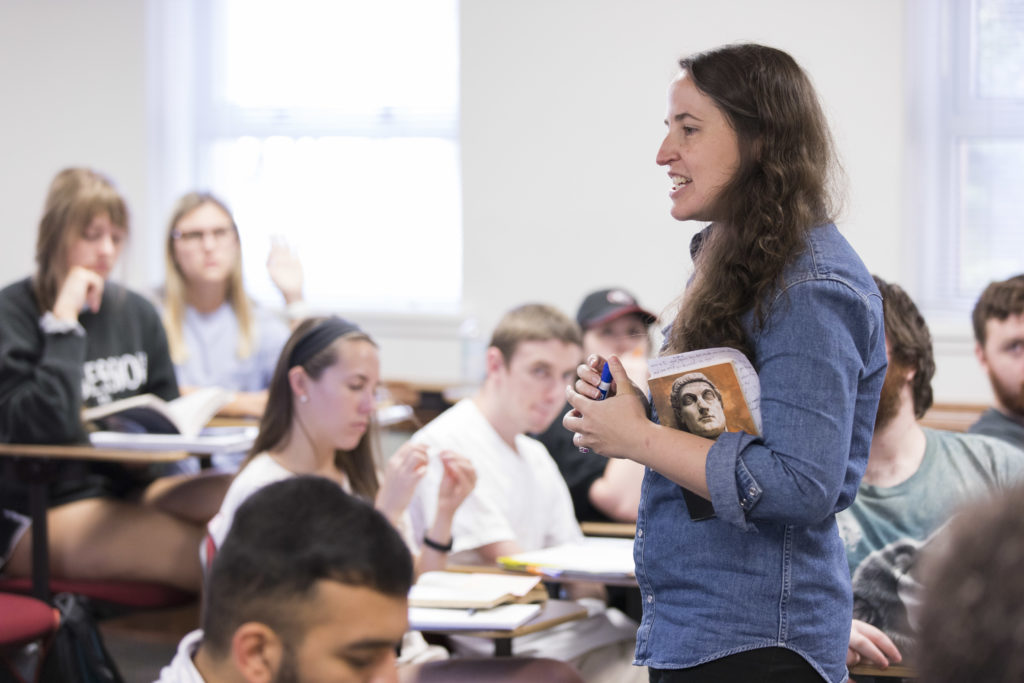 What do you hope students gain from their classroom experience with you?

I hope they see that any society that seems inscrutable at first can be understood if we’re generous and critical enough to make sense of its perspectives. I hope they’re a bit more skeptical of the idea that “civilization” is constantly improving. I hope they see that there’s a lot of social complexity and competition disguised in bland nouns like “society,” “the church” and “government.” And I hope they can tell you where Constantinople was!

I like it when people are honest about what they don’t know and what they find confusing. Historians do that all the time, and students should feel comfortable doing it, too.

This is so nerdy, but I love looking at the southern magnolia outside my office window because of the birds. There are great crested flycatchers and ruby crowned kinglets out there fairly often, and once I even saw a scarlet tanager. I text my friends about the unusual ones, even though it’s pretty lame to get a message like that. It’s hard to translate the pleasure of a good bird tree!

Go to shows in town, play D&D with my friends, putz around the yard, watch TV (“Atlanta” and “Rick & Morty” are current favorites), keep up with my friends in other parts of the country, and spend a week or two every year back in Colorado or New Mexico.

Voting in local and state elections. Supporting small farms (like the delicious Lazy Willow Farm and Woodland Gardens Organics). Learning more from my colleagues, including the members of the UGA and Slavery Committee, who know a lot about Athens’ history and who are making a real effort to connect their expertise with the communities who live here and plug it into university policies and programs.

Favorite book/movie (and why)?

Outside of the stuff I read for work, my favorite book this year was “Up in the Old Hotel,” which is a collection of the essays that Joseph Mitchell wrote for The New Yorker from the ’30s to the ’60s. On the one hand, he’s writing luminous portraits of overlooked people and places—a fish market, an old bar itinerant, Mohawks who work as welders—and on the other hand, he’s showing you how there’s a kind of invisible infrastructure that connects these spaces together. He makes you see the world as a weird, chaotic system that’s really worth investigating.

Near the end of a senior seminar I taught last year on the barbarian kingdoms, all the students came up with #lolmythesis tweets to sum up the results of their research. They were smart and self-aware and cracked me up. “Anglo-Saxon coinage was influenced by the Romans, but then again, what wasn’t?” “Bishop Gregory of Tours’ advice to Gaul: the saints are your homies.” “Early medieval popes had some authority … but not too much.” “Turns out that the English had a higher opinion of themselves in the past than they do today.” “We don’t know anything about early medieval Ireland, but it could hypothetically have been really cool.” The actual research papers were solid, too.