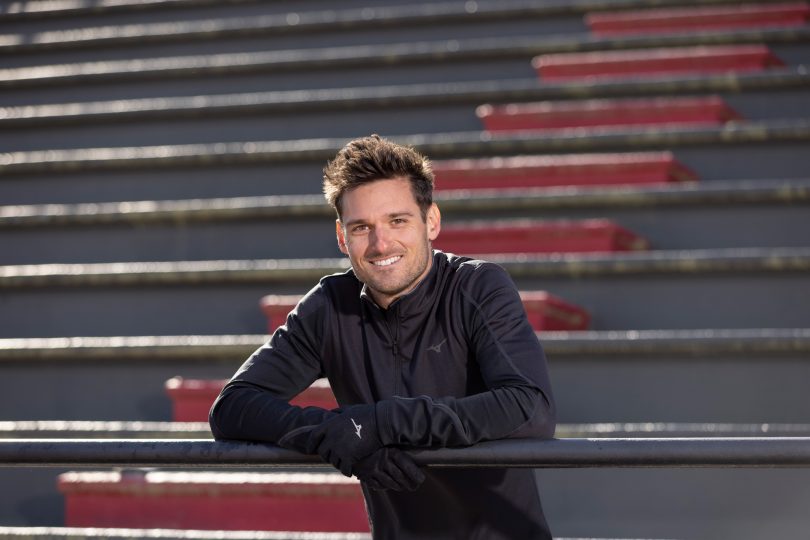 Jarryd Wallace AB '19 is a two-time Paralympian, three-time world champion, and four-time world record holder in track. He hopes to add to those accomplishments at the upcoming Paralympics in Tokyo this summer. (Photo by Peter Frey/UGA)

As a former state champion cross country runner at Oconee High School, Wallace AB ’19 was shocked when doctors told him his only chance at living a normal life, much less being an athlete, was to amputate his right leg from the knee down.

Wallace first felt pain in his leg during his junior year of high school. He was diagnosed with compartment syndrome, a common problem for runners. But the pain didn’t go away, and Wallace had his first surgery to relieve the pressure in his leg.

When the bandages were removed four days later, it was clear that something had gone wrong. The suture from his surgery had come undone and blood had seeped into his leg. Sixty percent of his muscle from the knee down was dead. To get his leg back to normal, Wallace submitted to almost two years of surgery and treatments. None of it worked.

I was comfortable and trusted the Lord’s plan for me, and realized that it was different than the one I had for myself. I understood that the loss of the leg was not the loss of my life. If anything, it became a second opportunity at life.” — Jarryd Wallace, 2012 and 2016 U.S. Paralympian and three-time World Championship gold medalist

“I went from being extremely active to sleeping on the floor of my parents’ room being completely immobile and needing assistance for almost everything,” he recalls.

UGA honored the athletic scholarship if offered to Wallace before his injuries, so Wallace was able to study close to home. But early on, he started depending on alcohol and drugs to ease the ongoing physical and emotional pain. After rediscovering his Christian faith, Wallace visited the doctor who told him he would need to amputate his leg if he ever wanted to have a chance at being an athlete again. The decision for Wallace was surprisingly easy.

“I was comfortable and trusted the Lord’s plan for me, and realized that it was different than the one I had for myself. I understood that the loss of the leg was not the loss of my life. If anything, it became a second opportunity at life,” he says. “I don’t know how to explain how a 19-year-old can make that decision other than just having the peace that came with trusting that plan.”

The year after the surgery removed half his leg, Wallace ran the fastest time in the world in the 100-meter race at the Parapan American Games. Since then, he’s been to two Paralympic Games, held four world records, earned three gold medals in world championship events, and won multiple national championships.

Wallace is still working with UGA trainers as he gears up for the upcoming Paralympics in Tokyo, which were postponed one year because of the pandemic. So Wallace took advantage of the extra time.

“Looking back, I think the postponement for me, mentally and physically, might have been a blessing in disguise. This year has really given me the opportunity to step back, focus on the process, and get healthy.”

At the same time, Wallace is working to pave the way for other amputee athletes. He’s collaborating with the Japanese company Xiborg to develop a new running blade. So far, there are only a handful of companies that make them, and Wallace hopes to push the industry forward. As director of the company’s Affordable Blade Project, Wallace hopes to create greater accessibility to cost-effective running blades and give more people the chance to run again, while also giving them some hope for their future.

“So many times we let our present circumstances dictate our drive and our goals. But the only way to move beyond whatever your circumstance may be is to begin having a dream and letting those desires dictate your response. Allowing ourselves to look ahead and letting that fuel the decisions we make.” 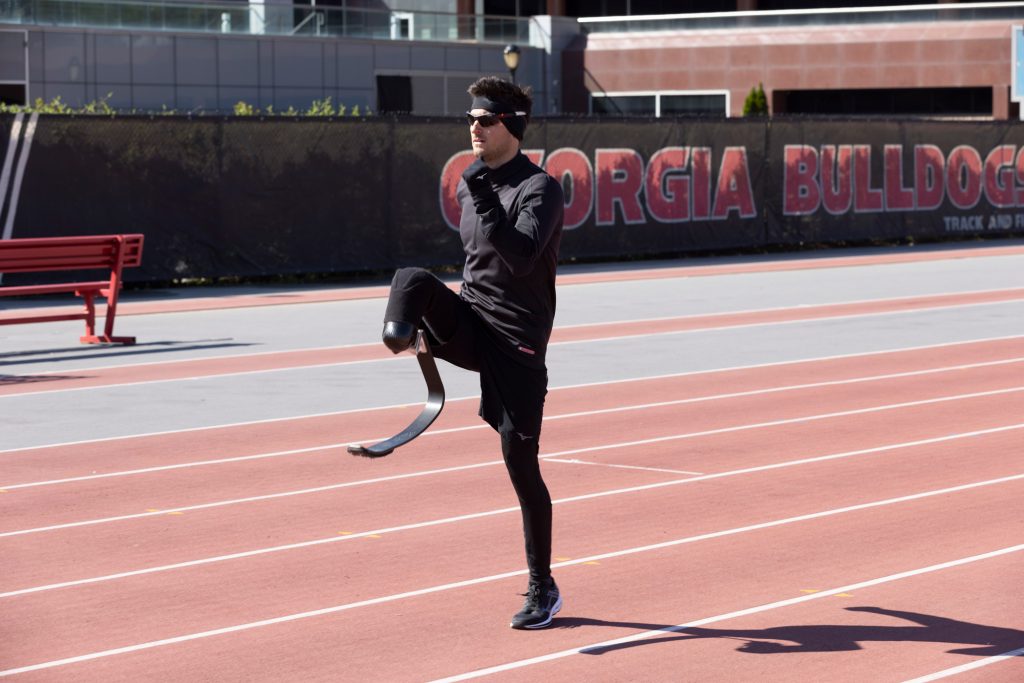 While Wallace trains for the Paralympics himself, he is working to pave the way for other amputee athletes. He’s collaborating with the Japanese company Xiborg to develop a new, affordable running blade. (Photo by Peter Frey/UGA)