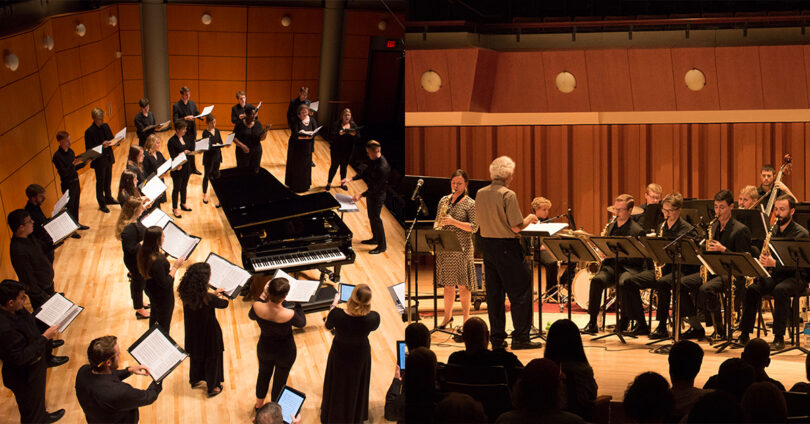 The Glee Club and Jazz Ensemble will perform in Hodgson Hall on Nov. 18 at 7:30 p.m. (Submitted photos)

The Hugh Hodgson School of Music continues its Thursday Scholarship Series with a concert featuring the Jazz Ensemble and Glee Clubs in Hodgson Hall on Nov. 18 at 7:30 p.m. The performance is part of the Spotlight on the Arts festival, happening on campus throughout November.

The program opens with Jazz Ensemble I Big Band, which is Hodgson School’s advanced Jazz Ensemble, directed by Dave D’Angelo, lecturer of jazz. This group plays at a variety of events, both on and off campus, and is a key component of the jazz minor degree, which is available to students via audition.

“The band will play a variety of styles in the jazz genre featuring music of composers of the past and present, including hits from the big band era that are sure to get your feet tapping,” said D’Angelo.

The second half of the program features both the Women’s and Men’s Glee Clubs, directed by J.D. Burnett, associate director of choral activities and area chair. They will present pieces about the symbolism of daytime, including works by Fine, Russo, Lange, Johnson and Walker. The Men’s Glee Club will sing staples of the men’s chorus repertoire by Thompson, Hogan, Chesnokov, Dickau and Tormis, and they will conclude the concert with the well-known Georgia Medley.

“What a gift it has been to resume rehearsal and performance in the choirs at UGA after 18 months of relative quiet. The Glee Clubs have hit the ground running and are eager to take the Hodgson Hall stage on Nov. 18,” said Burnett.

Tickets to the concert are $20 for adults and $3 for students with a valid ID and can be purchased through the Performing Arts Center Box Office online, by calling 706-542-4400 or in person before the event. There will also be live streaming available at https://www.music.uga.edu/live-streaming. If joining in person, the Hodgson School strongly encourages patrons to wear a mask inside the halls and public spaces.