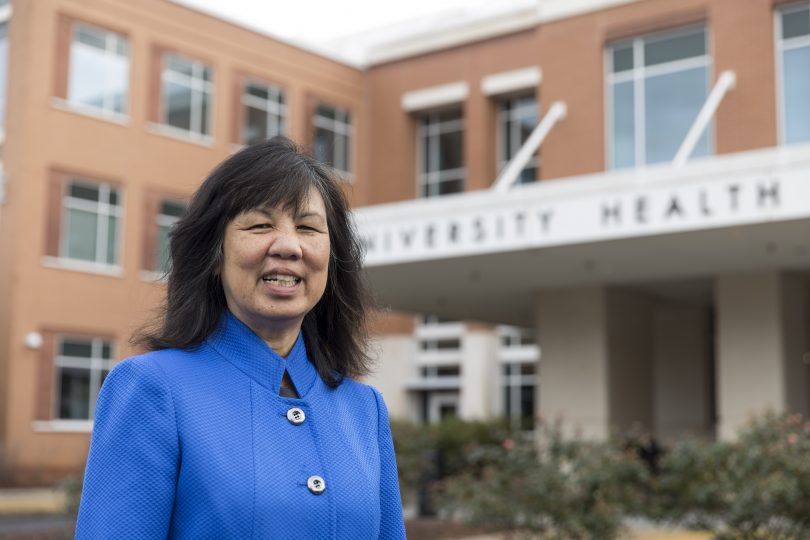 When Dr. Jean Chin found her way to the University of Georgia’s health center in 1988, she didn’t expect to stay in Athens long.

“College health was a career I entered by accident,” said Chin. “I had only planned to stay at the University Health Center for three years while my husband was working on his Ph.D.”

More than 30 years later, Chin continues to work with students at UGA.

Even though she retired as executive director of the University Health Center in 2018, Chin is still giving back to medical education in her current role of associate professor of medicine at the Augusta University/University of Georgia Medical Partnership.

Chin has received many awards during her career, but in May she was named the recipient of the American College Health Association’s Lifetime Achievement Award for 2020-2021. The award recognizes individuals who have provided outstanding service to ACHA and whose professional lives have been dedicated to improving the health of college students.

“I’ve received several awards and honors over the years, but this one is special, particularly as I have seen the list of past recipients, the giants of college health, most of them I know and have looked up to for years,” said Chin. “I’m a mixed bag of emotions: shocked, grateful, humbled and happy. I only wish my parents were still alive to share this with them.”

She then earned her MBA from Kennesaw State, her M.D. from Tufts University School of Medicine, and completed her residency at Westchester County Medical Center, New York Medical College in Valhalla, New York. 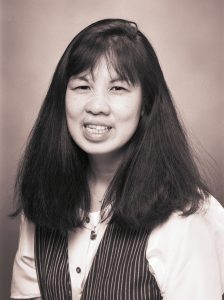 She began as a medical staff member at the University Health Center. From 1992-2004, she served as medical director before being named executive director in 2005—a title she held until her retirement before earning her current role of executive director emeritus. The health center saw many changes and improvements during Chin’s tenure.

The center moved from its former location in Gilbert Hall on Lumpkin Street to its current building on East Campus in 1997. Chin oversaw numerous renovations and additions to the center beginning in 2008 before it transformed into the current 111,000-square-foot, state-of-the-art facility with 13 clinics.

The renovations added many crucial aspects to keep the health center up to date to better serve patients. A vision clinic was added, and several departments were expanded, including the physical therapy department, the pharmacy, and counseling and therapy services. In addition, a teaching kitchen was added to teach students how to prepare healthy foods.

The expansions to the building also brought additional space for the Fontaine Center—a center for alcohol and other substance misuse prevention. The Fontaine Center also houses the relationship and sexual violence prevention office including 24-hour on-call advocacy services.

“There were renovations along the way, but each major construction project was done to improve services, increase accessibility, improve clinician and staff efficiency, expand service offerings, and yes, to generate revenue,” said Chin. “Over time, the university grew, student and parent expectations changed, the delivery of care evolved, and the revenue model changed. The University Health Center also evolved to remain viable, relevant and student centric.”

While she was at the helm, Chin also established both the Student Health Advisory Committee, an organization to help provide a student voice in health center operations and promote an open channel of communication between the UHC staff and the student body, and the Healthy Dawg Ambassadors, a group of students who are chosen to officially promote the mission and vision of the University Health. Chin said working with the Student Health Advisory Committee was one of the most rewarding experiences during her time at UGA.

“These talented, committed, enthusiastic and exceptional students provide the student voice for health matters,” said Chin. “I mentored many of them, and in return was so proud when they were admitted to graduate school, medical school, law school, dental school, PA programs and more.” 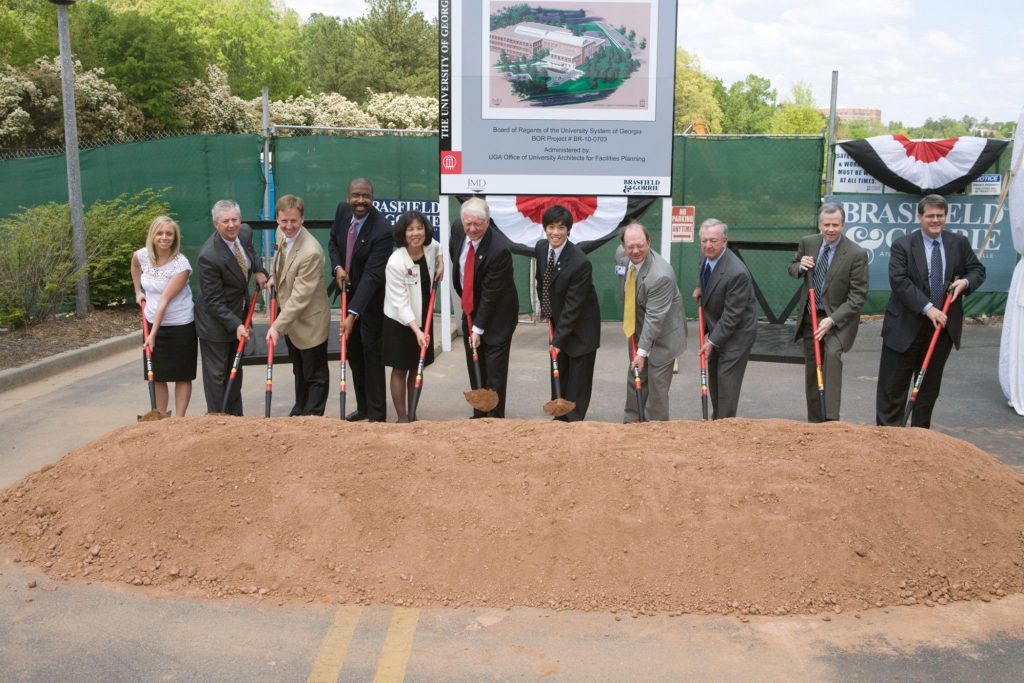 Under Chin’s leadership, the health center also became one of 17 college health centers to be accredited by The Joint Commission. Accreditation is based on patient centered care, access and care coordination.

“Hands down, the most rewarding thing about my career has been getting to work with all the people who have crossed my path in the last 30 plus years,” said Chin. “Working at the University Health Center was the best job I could have ever hoped for, and the people who work there are the cream of the crop. We grew to almost 300 staff members, and it got increasingly difficult to get to know everyone well as my responsibilities expanded. However, the Health Center staff were like my own family. We celebrated birthdays, weddings, graduations, births and mourned deaths together. We worked hard, but we had so much fun, too.”

Even when she neared the end of her career at UGA, Chin added more hours to her busy schedule and began teaching one afternoon per week at the Medical Partnership in 2015.

Going above and beyond

Shant Ohanian, a rising second year at the Medical Partnership, said Chin goes above and beyond to help her students.

“Dr. Chin is probably one of the most supportive and kind preceptors a student could have,” said Ohanian. “She has challenged us and made us think critically about our history and physical exam skills, and she has spent considerable time outside class to guide and mentor us to be the best clinicians we can be. I and other students have enjoyed having Dr. Chin for clinical skills because she makes us feel comfortable and capable in the exam room and with patients.

“She comes in prepared with a specific list of goals for her students and doesn’t leave until she feels we are adequately prepared. She will reach out after class and before exams to make sure we are feeling well and rested, and she is always prepared to provide that extra help or guidance when needed.”

Chin’s commitment to the medical field and willingness to go the extra mile to help others has been celebrated throughout her career. Her awards and achievements include: American College of Physicians Georgia Chapter Community Based Teaching Award (2018), UGA Faculty Service Award (2018), Vice President’s Award, Distinguished Leadership in Student Affairs (2017), Edward Hitchcock Award for Outstanding Contributions in College Health (2016), Charles F. Bohmann Award for Dedication and Contributions to College Health (2015), and Governor’s Commendation for Excellence in Customer Service (2010).

“Dr. Chin has been a tremendous leader and advocate for student health at UGA and across the country,” said Medical Partnership Campus Dean Dr. Shelley Nuss. “She is so deserving of this national award.”

“I always looked forward to having Dr. Chin for clinical skills,” said Ohanian. “She is a coach as well as a teacher, and she draws on her experience dealing with all kinds of patients and working in many different settings to hone our clinical skills. I am envious of her future students.” 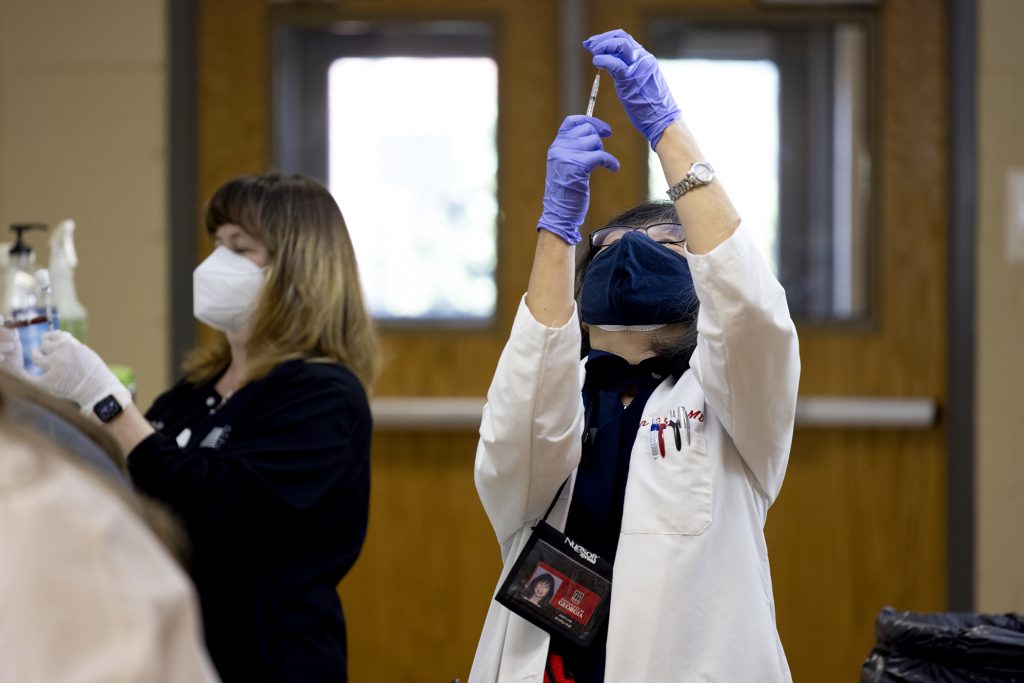 Chin admits that she has failed at one thing—retirement.

Once Chin retired from UGA, she added two more half days at the Medical Partnership to her teaching schedule.

“After her retirement from the University Health Center, Dr. Chin wanted to continue in a role that could shape future physicians,” said Nuss. “For the past several years, she has shared her expertise and talents with the students at the Medical Partnership through our clinical skills and community and population health programs. She is a student favorite, and we are honored to have Dr. Chin as one of our clinical educators.”

“I have found myself busier than ever in my retirement with working at the Medical Partnership, ACHA, and the COVID-19 Vaccine Steering Committee,” said Chin. “My daughter tells everyone that I have failed miserably at retirement. She’s right.”