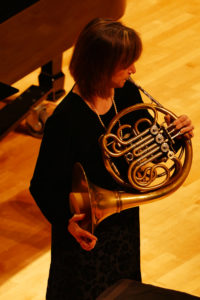 Jean Martin-Williams, Josiah Meigs Distinguished Teaching Professor of Horn, will perform works by a variety of composers at the first Faculty Artist Series concert of the semester.

This season’s Faculty Artist Series begins with Josiah Meigs Distinguished Teaching Professor of Horn Jean Martin-Williams, who is also an associate dean in the Franklin College of Arts and Sciences.

The concert is set for 7:30 p.m. Sept. 13 in Ramsey Hall. Joining Martin-Williams on stage for the first time in a solo recital will be faculty pianist Damon Denton.

The program will spotlight works originally written for the horn, plus a transcription from a vocal work. Even though the pieces represent music from four different countries, all of the works have a singing quality to them.

To open the recital, Martin-Williams wanted to feature horn colleague James Naigus. They will be performing one of Naigus’ own compositions, titled “Journey’s Call.” Martin-Williams also wanted to highlight some works by female composers, so she chose pieces by Nyquist and Mourey that would fit with her program.

In addition to these pieces, she and Denton will be playing a piece by French composer Jean-Michel Damase.

The influence of Damase’s father, who was a harpist, can be heard in his writing.

“Damon and I have particularly enjoyed learning this piece together, due to all of the different tone colors possible from this impressionistic music,” Martin-Williams said.

The evening will end with “Songs of Travel” by Robert Louis Stevenson, which is set to music by British composer Vaughn-Williams.

“There is an extra challenge to communicate the text when words are not actually being sung. People often say the horn is like the human voice, so perhaps this is the test of that theory,” Martin-Williams said.

Speaking to how much is written about the transformative power of music, Martin-Williams said that their intent is not so grandiose.

“We hope that each member of the audience will get whatever he or she needs from the recital,” she said.

Tickets to the concert are $12 for adults and $6 for students and children. They can be purchased online at pac.uga.edu, by calling 706-542-4400 or at the PAC box office. Those unable to attend can watch the concert live on the Hodgson School’s website at
music.uga.edu/live-streaming.