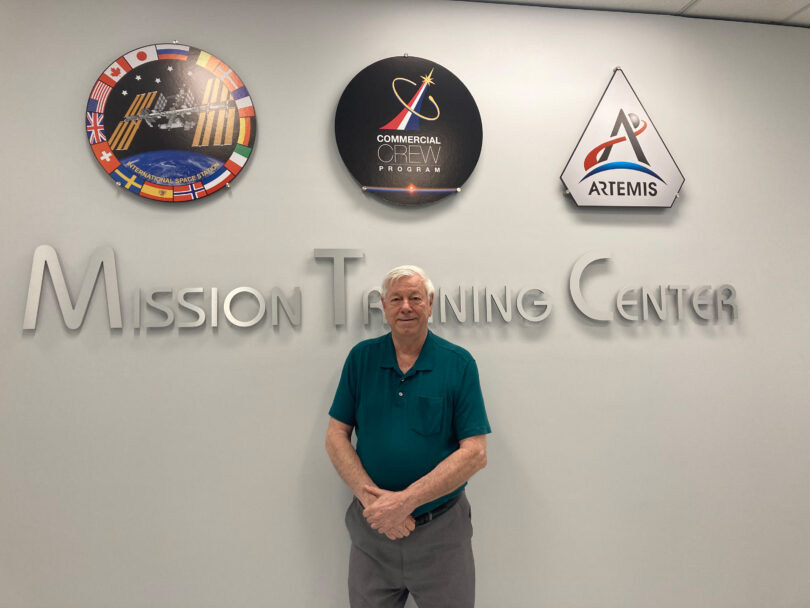 Jerry Swain, NASA's resident storyteller, joined the agency in 1980 after a distinguished career as an Air Force pilot. He has worked with crews ranging from the space shuttle to the International Space Station.

Jerry Swain Jr. spent the first part of his career as far from the ground as possible. And he’s spent every day since helping others go even further.

As a child and into his college years, Swain BSEd ’68 was always looking up. Although he came to UGA in 1964 to play for what was the late Vince Dooley’s first football team, Swain spent more time looking at the sky than the field. And at the end of his first year, he switched his focus to his dream of becoming a pilot through the University of Georgia’s Air Force ROTC program.

After graduating with a degree in education, Swain was commissioned as a second lieutenant in the Air Force. During his service, he flew almost 200 combat missions during two tours in Vietnam and led Army and Air Force units in Germany.

So in 1980, when NASA recruited him to join the space shuttle program, Swain didn’t hesitate.

“The space shuttle program was just starting out, and I was one of the first ones they hired,” he recalls. “NASA had a lot of engineers, but they didn’t have a lot of ex-military guys who had flown airplanes and knew how to talk to pilots who were training to be astronauts.”

Swain began his NASA career as a control and propulsion systems instructor, but with his teaching background and military experience, it wasn’t long before he became team lead for a series of shuttle crews, including the ill-fated Challenger crew in 1986.

“My team and the Challenger crew, we did everything together,” Swain says. “We celebrated together, we went to each other’s houses, we knew each other’s kids. After the accident, everybody here was dedicated to figuring out what happened.”

The cause of the shuttle explosion was a failed seal between rocket boosters. As NASA mourned the loss of the Challenger crew, it grounded the shuttle program and turned to other projects. Swain found himself advising on one of NASA’s newest ventures: the International Space Station.

His main job was teaching flight crews again, but this time, he was creating the training requirements for astronauts who would spend quite a bit more time in space than those who came before.

Teaching teams how to put the space station together in orbit, one piece at a time, was a daunting feat. But by this point, Swain was no stranger to teaching under high stakes.

“I think UGA trying to make a teacher out of me and the Air Force making a pilot out of me is what got me here,” he says.

After the successful launch of the space station in 1998, Swain returned to the shuttle program. Having come full circle, Swain evaluated and provided guidance to shuttle instructor teams, just like the ones he led in the ’80s, until the program concluded in 2011.

These days, Swain’s home and office feel like a glimpse both past the stars and back in time with shelves lined with photos, memorabilia, and even a toy rat that was a stowaway on a 1983 space shuttle mission.

It’s befitting for NASA’s resident storyteller who now guides celebrities, foreign dignitaries, former presidents, and groups of curious students through 40 years of space exploration at NASA. His current role as speaker, tour guide, facility manager, and historian gives Swain the opportunity to tell the stories of the space program that has inspired him and challenged him for decades.

And he’s grateful that he never stopped looking up.