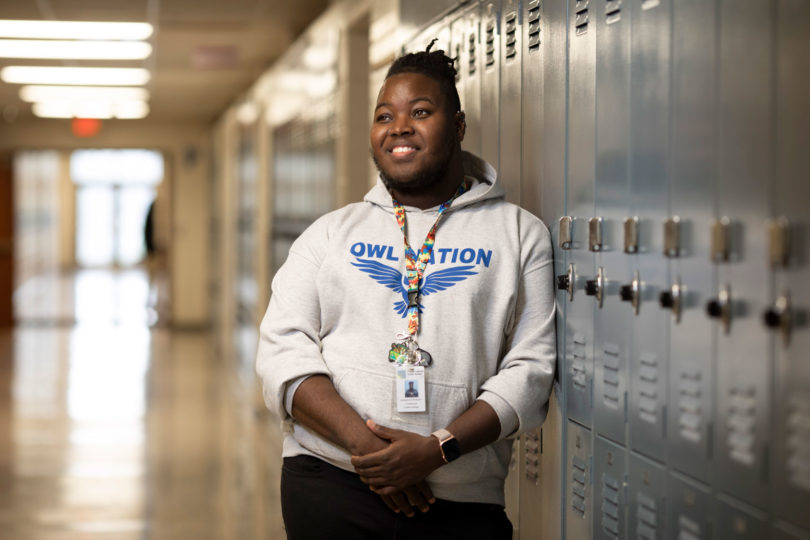 Jhamarcus Pharaoh BSFCS ’15, MEd ’18 is a counselor at Clarke Middle School in Athens and he is dedicated to meeting students where they are and making sure they are comfortable with themselves. (Photo by Peter Frey/UGA)

For Jhamarcus Pharaoh BSFCS ’15, MEd ’18, the role of school counselor takes many different forms. From providing a welcoming space to connecting students with opportunities, Pharaoh’s approach emphasizes equity. “Some kids just want to be validated in the skin that they’re in and in the experiences they have,” he says. “Others just want silence, and they come into my office to sit. And some students really just need someone who they believe cares about them.”

Pharaoh interviewed with schools across Georgia after earning his master’s degree in professional counseling from UGA. When Clarke Middle School offered him a position, he knew he’d found where he was meant to be. “There’s a lot of intersectionality between my racial identity and my gender identity, and I’m very on the surface about that,” says Pharaoh. “The administration wasn’t going to let the fact that I have an earring or two compromise the fact that I have two degrees from one of the best schools in the country.”

Accepting a position at an institution that supports his values and ideas has allowed Pharaoh to help students experiencing challenges similar to what he faced. Growing up in a community where resources were tight, Pharaoh was the first of his family to attend a four-year college. “If I can be the person to tell a kid, ‘You can go to college’ or ‘You can do something great,’ that just means the world to me.”

Pharaoh calls on support from the community, schools, and other professionals to continue reinforcing that message to the next generation. “I think a lot of people think that kids are things that have to be fixed, and they’re not. It’s up to us as adults to show kids that yes, you’re good enough, you belong, and you’re just as capable.”