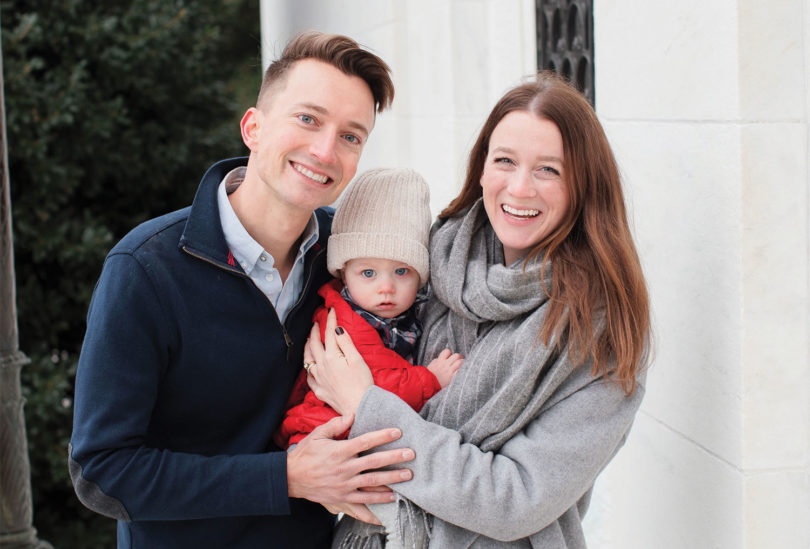 Lucas AB '10, BBA '10 and Jill Puente AB '11, MPA '12, seen here with their 1-year-old baby Bulldog, Nico, are leaders in northern California's tech industry. They encourage students and alumni alike to reach out and connect to peers and mentors. Those mutually supportive relationships can mean a lot down the road. (Photo by Rodney Novaes Photography)

Finding a tech sector job in Silicon Valley, where egos are big and competition is stiff, can be pretty daunting. But Jill and Lucas Puente carved out success in the industry. The key is making connections.

For Jill, the head of environment and sustainability marketing at Google, and for Lucas, a senior survey scientist for the collaboration platform Slack, the connections started at the University of Georgia.

Jill AB ’11, MPA ’12 and Lucas AB ’10, BBA ’10 met at UGA through the Model U.N. team, which simulates the kind of give-and-take problem-solving that happens through the United Nations.

“It encourages students to compromise and build diplomacy,” Jill says. Looking back fondly, she admits, “it’s a pretty nerdy extracurricular” and “I took it way too seriously.”

“That’s her way of saying she’s way better at it than I was,” Lucas throws in.

There were other connections too. Lifelong friendships. Meaningful mentorships with administrators and faculty, including Jere W. Morehead JD ’80, before he became the university’s president.

“It’s pretty cool what a family feel UGA has, despite it being so large,” Lucas says.

Through an internship on Capitol Hill in UGA’s Washington Semester Program, Lucas found his calling. He was inspired by the idea of getting answers to complicated questions. “The people I wanted to emulate had research backgrounds and Ph.D.s.,”
he says.

So, after graduating, Lucas went to Stanford University to work on a master’s in economics and a doctorate in political science.

A year later, Jill started looking for a job in Silicon Valley. A UGA classmate knew someone at the rapidly growing startup Wildfire, a social media marketing company. She was hired, and within a year Wildfire was acquired by Google.

Now Google’s head of environment and sustainability marketing, Jill promotes the tech giant’s commitment to sustainability. For example, Google is the largest purchaser of wind and solar energy in the world, she says, which powers Google’s data centers.

Lucas finished at Stanford and recently started a new job at Slack, where he translates survey data into valuable insights across the company. They’re happy in San Francisco with their 1-year-old son, Nico, and they encourage fellow Bulldogs to join the tech scene.

Just be ready to reach out to a lot of people to get started. And don’t let the fear of bothering people get in the way of making connections, Jill says. Most of the companies have referral programs that offer incentives for existing employees to bring in new talent.

“Reach out to anyone and everyone you know to get introductions and create conversations,” she says. “People were super eager to help me. Not to mention, people are just happy to help out fellow Bulldogs.”