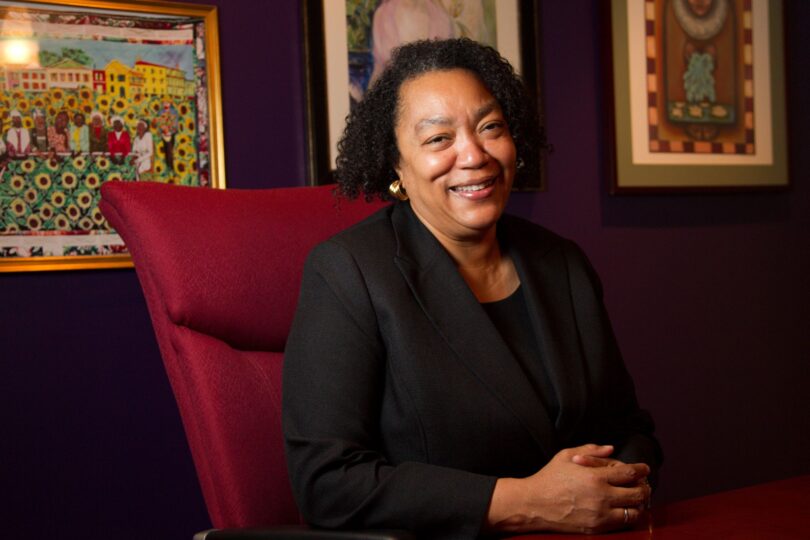 Juanita Johnson Bailey is the inaugural recipient of the Centennial Professorship. (Photo by Dot Paul)

Founded in 1977, the Institute for Women’s Studies at UGA is one of the senior women’s studies programs in the United States. It also holds the distinction of being the first academic gender studies program among Georgia’s institutions of higher education.

To celebrate the 100th anniversary of coeducation at the University of Georgia in 2018, the Franklin College of Arts and Sciences proposed to establish the Centennial Professorship in Women’s Studies. The $250,000 professorship would recognize and support an outstanding faculty member whose work focuses on interdisciplinary issues of gender and women’s history.

“I am honored to be appointed to the Centennial Professorship in Women’s Studies. I am grateful to the Franklin College for this recognition. As a teenager, I was first able to put a name to my worldview and perspective—feminism—and later to my academic disciplines—women’s studies and education,” said Johnson-Bailey. “As a professor, I have been fortunate to research and teach in these fields that have sustained and invigorated me and given purpose to my life. Receiving this acknowledgment for working in areas that has given me so much is a blessing.”

An anonymous donor, through a desire to strengthen gender and women’s studies in the Franklin College, presented $125,000 to the UGA Foundation to create the Centennial Professorship in Women’s Studies. The University of Georgia provided the matching $125,000 to fully fund this professorship.

“I am thrilled that Dr. Johnson-Bailey has been selected as the first Centennial Professor in women’s studies,” said Patricia Richards, director of the Institute for Women’s Studies and Josiah Meigs Distinguished Teaching Professor of sociology and women’s studies. “Her work on Black women’s narratives and race/gender inequality in educational spaces has had vast influence on the field, and her commitment to building feminist community at UGA is beyond compare. We are honored that she is part of our community, and she is most deserving of this recognition.”

Johnson-Bailey’s research contributions extend to more than 100 publications, including journal articles in the Harvard Educational Review and Journal of Higher Education, and authoring and co-editing books.

A 2018 University Professor and Meigs Distinguished Teaching Professor, Johnson-Bailey’s areas of expertise include adult education, Black feminism, qualitative studies research and women’s studies. These areas, along with her work to cultivate inclusive spaces on campus, align with the Faculty Women of Color in the Academy’s mission to engage and connect women of color in higher education.

Johnson-Bailey’s book, “Sistahs in College: Making a Way Out of No Way” (Krieger Press, 2001), received the Phillip E. Frandson Award for Literature in Continuing Higher Education and the Sadie T. Mossell Alexander Award for Outstanding Scholarship in Black Women’s Studies. She is also the co-editor of “Flat-Footed Truths: Telling Black Women’s Lives” (Henry Holt, 1998) and the Handbook of Race in Adult Education (Jossey-Bass, 2010).

She was the 2015 recipient of the Eleanor Roosevelt Fund Award, an honor given by the American Association of University Women for outstanding contributions to equality and education for women and girls, and the Career Achievement Award from the American Association for Adult and Continuing Education Commission of Professors in 2018. In addition, Johnson-Bailey is a member of the International Adult and Continuing Education Hall of Fame, a Houle Scholar and a Lilly Teaching Fellow. She will receive this year’s Women’s Studies Faculty Award at the Institute for Women’s Studies Women Faculty Reception in November.