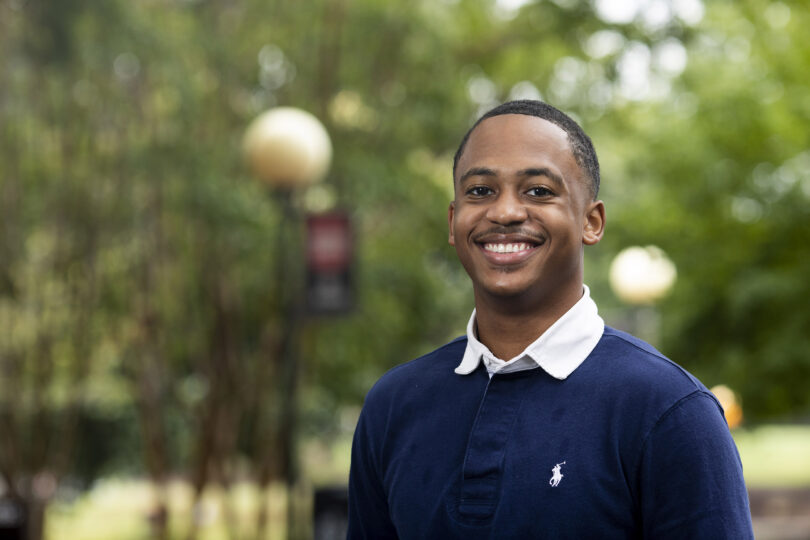 Joshua Patton, a senior from Decatur majoring in sociology, gives tours through UGA’s Visitors Center and served as a 2019 orientation leader. His mission is to make everyone feel more welcome at UGA. (Photo by Andrew Davis Tucker/UGA)

“Always smile when you’re walking around campus. If you see someone you know, speak to them,” he said. “It can really go a long way to appear welcoming to others. I don’t think everyone understands how important it is to allow others to feel welcome on campus.”

Patton, a senior from Decatur majoring in sociology, gives tours through UGA’s Visitors Center and served as a 2019 orientation leader. His mission is to make everyone feel more welcome at UGA.

It all goes back to spring of Patton’s senior year in high school.

“When I was deciding between schools, I got a call from UGA telling me about the Georgia Daze minority recruitment. You’re able to come up to UGA for the weekend, and spend some time on campus. You’ll have a host whose room you’ll stay in on campus. It sounded amazing,” he said. “I hadn’t toured UGA yet.”

He spent the weekend at UGA. He ate lunch at Bolton Dining Commons, played basketball at the Ramsey Student Center and went to Africa Night hosted by the African Student Union. He went to the College of Agricultural and Environmental Science and Minorities in Agriculture, Natural Resources, and Related Sciences Breakfast; toured the Mary Frances Early College of Education; went on a bus tour of the campus; ate lunch with student leaders; and listened to an alumni panel.

“After Georgia Daze, I truly fell in love with UGA,” he said. “I had a feeling I wanted to go here before, but that definitely solidified it. I fell in love with the Black community at UGA. I felt very welcome on campus and that there were going to be so many people—students, faculty, staff—who were here to support me.” 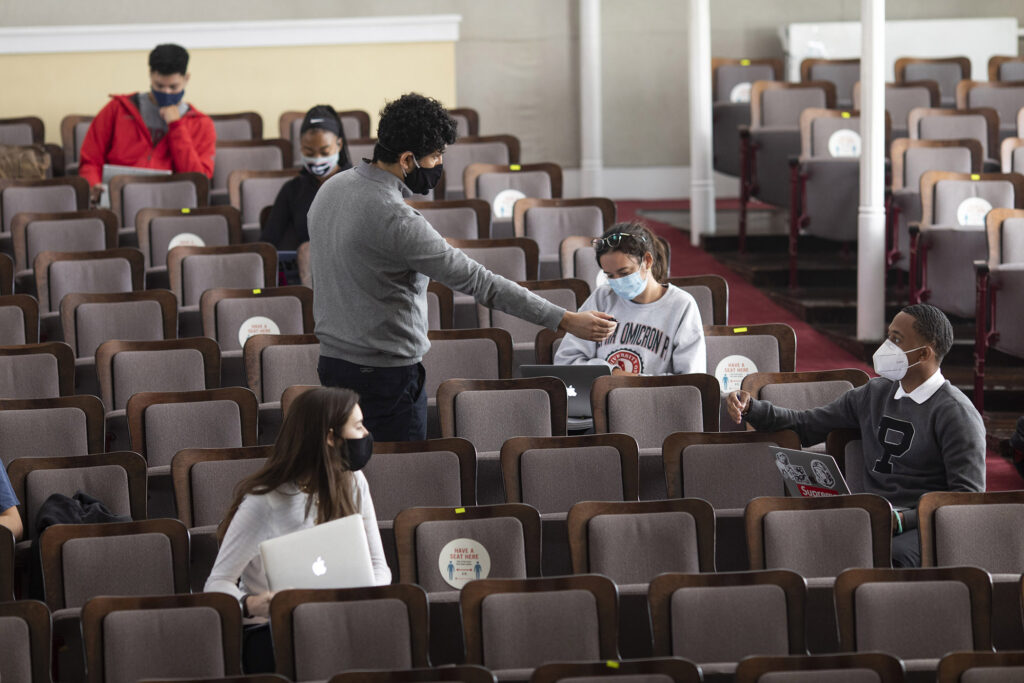 Professor Jorge Derpic leans in with the microphone to undergraduate student Joshua Patton as he teaches students in person and on a Zoom session during his Sociology of Urban Life class in the Chapel. (Photo by Andrew Davis Tucker/UGA)

Patton started at UGA in the fall and immediately volunteered with Georgia Daze. During his freshman year, he was a host in the program. During his sophomore year, he was on the program’s executive board. “I was communications director. I was doing social media, graphic design—and I’d never designed before.”

After that, he felt like he had a vision for Georgia Daze, and he served as president during the 2019-2020 academic year. In February, the group hosted in-person meetings with high school students accepted during early decision. In April, the group pivoted to an online weekend with lots of Zoom meetings and Instagram live events, due to the COVID-19 pandemic.

Patton served as orientation leader for group 14 during 2019 orientation. That summer introducing thousands of new students to UGA was transformative.

“I didn’t expect to connect to some of my orientees as much as I did,” Patton said. “There were some, to this day, we’ll reach out to each other.

“Orientation was growing period for me. I really fell in love with the people that I was on the orientation team with. They really allowed me to grow and taught me a lot about myself and what I was passionate about.”

He even ended up changing his major from pre-medicine to sociology. “I really like working with students and working with people—serving large groups of people. I’m more interested in people, how society works, and how I can make a larger impact on the world around me.” After graduation, he’s considering law school. His aim is to serve the public, maybe in politics, government or higher education. 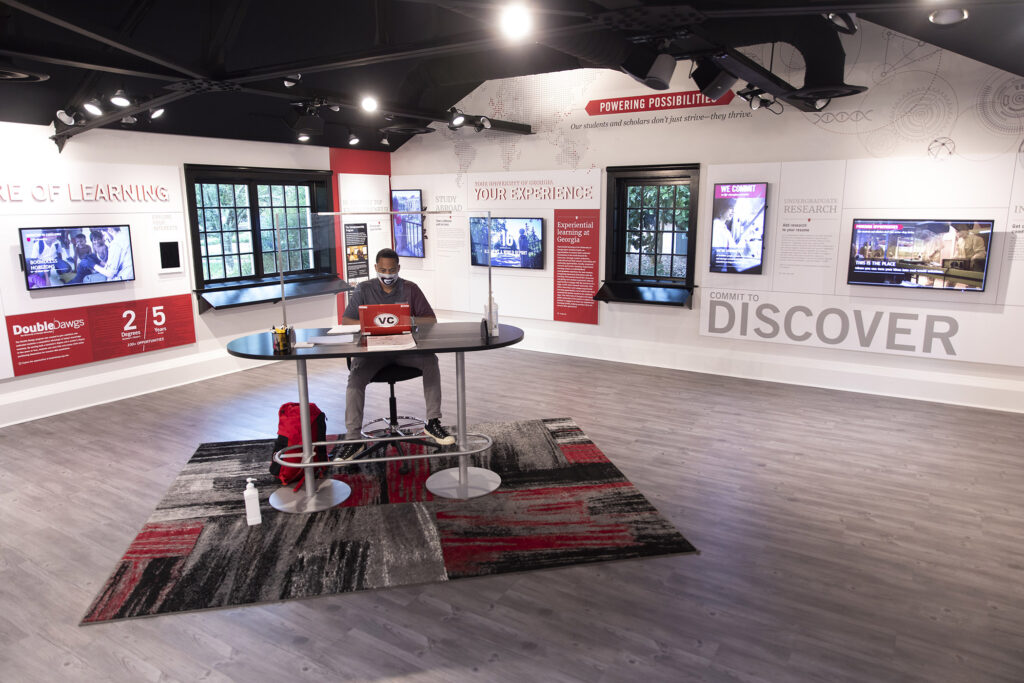 Tour guide Josh Patton works virtually on his laptop during his shift at the Visitors Center. (Photo by Andrew Davis Tucker/UGA)

After going through training, he gave his first in-person tour before spring break.

He’s done a few virtual tours this summer and hopes to be able to resume in-person tours this academic year.

“I just really love the university. I feel like it’s had a huge impact on me and my development as a person and as a student,” he said. “When I first came to UGA, I didn’t think I thought there would be as many opportunities and resources available to me. When I got here, I realized there were so many people here to help me, to really be a successful student.” 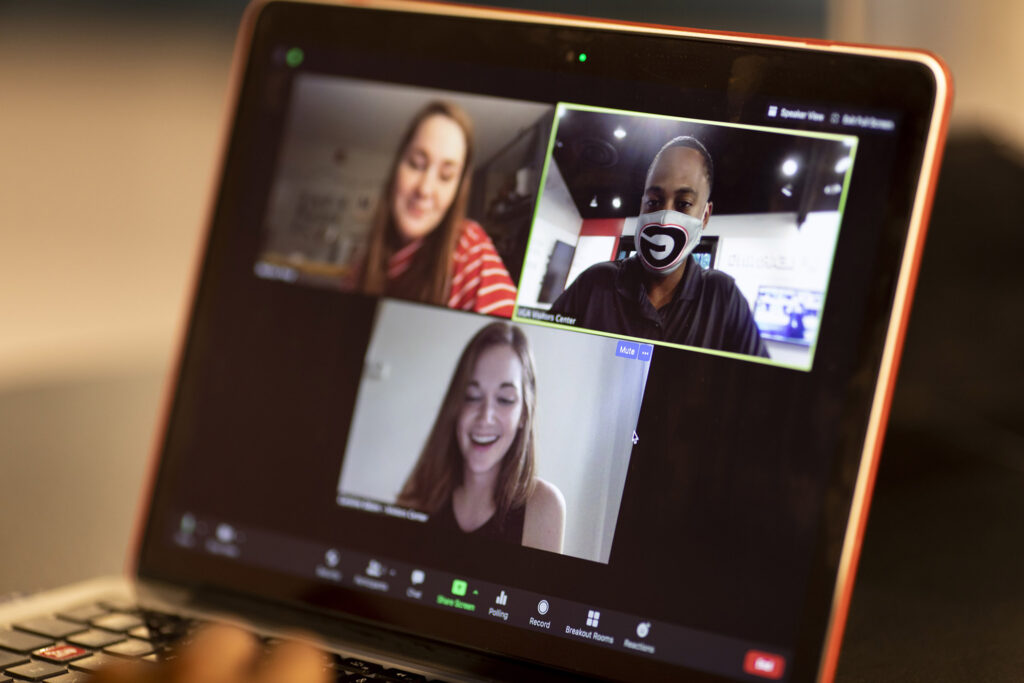 Tour guide Joshua Patton talks on a Zoom call as he works virtually on his laptop during his shift at the Visitors Center. (Photo by Andrew Davis Tucker/UGA)

Why does he give tours?

He wanted students of color to see someone they could identify with on the stage in Tate Grand Hall or leading tours.

“As an orientation leader, I tried to reach out to as many Black students as I could at orientation so that it was a welcoming environment.”

This year, Patton will be chair of the Black Student Union. His goal is to unify the Black student body.

“I want the Black student organizations to speak with one consolidated voice,” he said.

He wants to make sure events aren’t competing with each other and to boost attendance. Ultimately, he wants Black students to know that “the Black community is another home for you.” He’s committed to making others feel welcome.

And it comes back to Georgia Daze.

“I did Georgia Daze minority recruitment on a smaller scale. I really wanted to do that on a larger scale and reach more students. Give them my experience. Tell them why I loved UGA and why I would like for them to come to UGA. They don’t necessarily have to come to UGA, but I want them to know why college is so important. I’ve experienced so much growth while I’ve been at UGA. I want to give my story to other people when they come to the University of Georgia.”