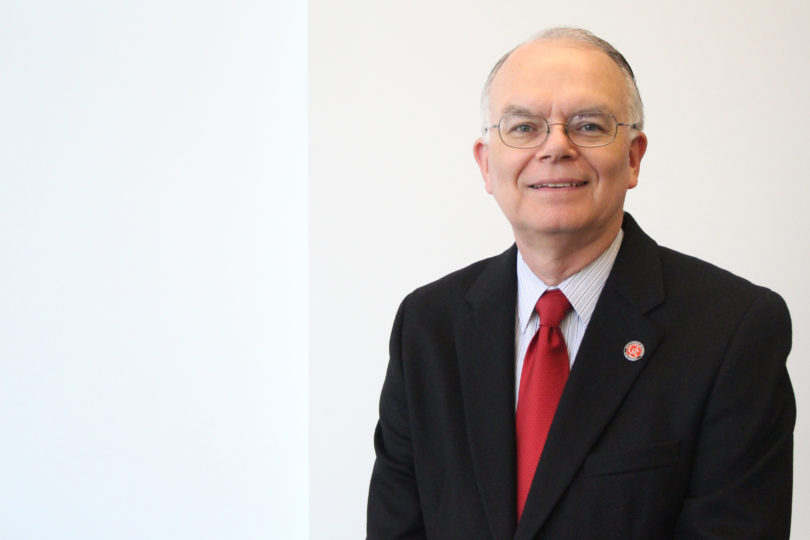 Keith Herndon has been named to the William S. Morris Chair in News Strategy and Management in Grady College.

Keith Herndon, a professor of practice in journalism, has been named to the William S. Morris Chair in News Strategy and Management by the dean of the Grady College of Journalism and Mass Communication.

“Keith Herndon is an innovator, an academic entrepreneur who works tirelessly on behalf of Grady students,” said Charles N. Davis, dean of Grady College. “I am delighted to see him uphold the proud legacy of the Morris Chair, which traces its roots to the legendary Conrad Fink. This is an important time for building leadership in journalism, as we work with our colleagues in the profession to help create new ways of producing and monetizing the work we do—and I can’t think of a better person to spearhead these efforts at Grady College.”

Herndon is the third professor to hold the Morris Chair. The late Conrad Fink, a legendary Grady professor, was the initial Morris Chair. He was followed by Professor Kent Middleton, who was head of the journalism department and is now professor emeritus.  The program began in 1995 as a named professorship and was elevated to an endowed chair in 2005.

William S. Morris III established the chair in memory of his late father, William S. Morris Jr., who joined the Augusta Chronicle as a bookkeeper in 1929 and rose through the ranks to publisher. He became the controlling partner in 1945 and developed the company into one of Georgia’s leading communications organizations.

“We honor the legacy of those represented by this chair—its namesake, its creator and the professors who held it—by moving forward with the challenge of training a next generation of news leaders who are prepared to defend the news media’s vital role in our democracy,” Herndon said.

Funding provided by the endowment will be used to expand graduate education in the area of news strategy and management through new academic and applied research initiatives. These plans include a new doctoral research fellowship and a new master’s level graduate assistantship.  Plans also include expanding Herndon’s collaborations and projects with UGA’s Fanning Institute for Leadership Development in the areas of strategic and ethical leadership.

Herndon will continue as director of the James M. Cox Jr. Institute for Journalism Innovation, Management and Leadership where he leads the Cox Institute Leaders program and the Grady Mobile News Lab. Herndon, a Grady alumnus from the class of 1982, taught at Grady as a lecturer in fall 2011. He returned the following year as a visiting professor and held that position until joining the full-time faculty in 2016. Herndon earned a Master of Liberal Studies from the University of Oklahoma in 1997 and completed a doctorate in media and information from Australia’s Curtin University in 2011. Prior to teaching at Grady, he ran his own media and technology consulting firm and taught part time at Kennesaw State University.

Previously, he worked at Cox Enterprises’ Internet division, serving as vice president of operations and vice president for planning and product development. He managed strategic partnerships and led technical diligence on Cox’s new media investments, serving on the board of directors of an investment recipient. He was also director of operations at Cox Radio Interactive, a pioneer in streaming media.

Herndon began his career while at Grady, working as a reporter for his hometown paper in Elberton, and then as a sportswriter for the Anderson Independent in South Carolina and the Athens Banner-Herald. After graduation, he was a Pulliam Journalism Fellow with The Indianapolis News. He was a business reporter at The Atlanta Journal-Constitution before becoming assistant business editor, deputy business editor and administrative editor.

Herndon is the author of The Decline of the Daily Newspaper: How an American Institution Lost the Online Revolution, which was published by Peter Lang in 2012. He also has published two books about entrepreneurship and innovation.