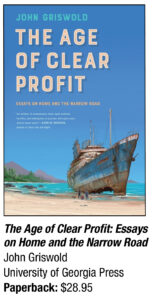 After starting a new life in the Mississippi Valley, 50-year-old John Griswold thought he was turning over a new leaf and would find new friends.

What he found instead was not the “clear profit” poet Kobayashi Issa described in later life. There was political division; societal expectations for religion, race and family; gun obsession; and environmental degradation.

“The Age of Clear Profit: Essays on Home and the Narrow Road” follows the eight-year journey that Griswold undertook to see more of the world in the United States and beyond. Griswold tells of journeys around the Gulf of Mexico, Russia, New Mexico, Standing Rock, the Basho Trail in Japan, among others.

Through his journeys, Griswold finds what is important to him: his children, wholeheartedness and the act of trying. He finds a way to find a little peace and quiet between the chaos and complexity of the world through his essays.