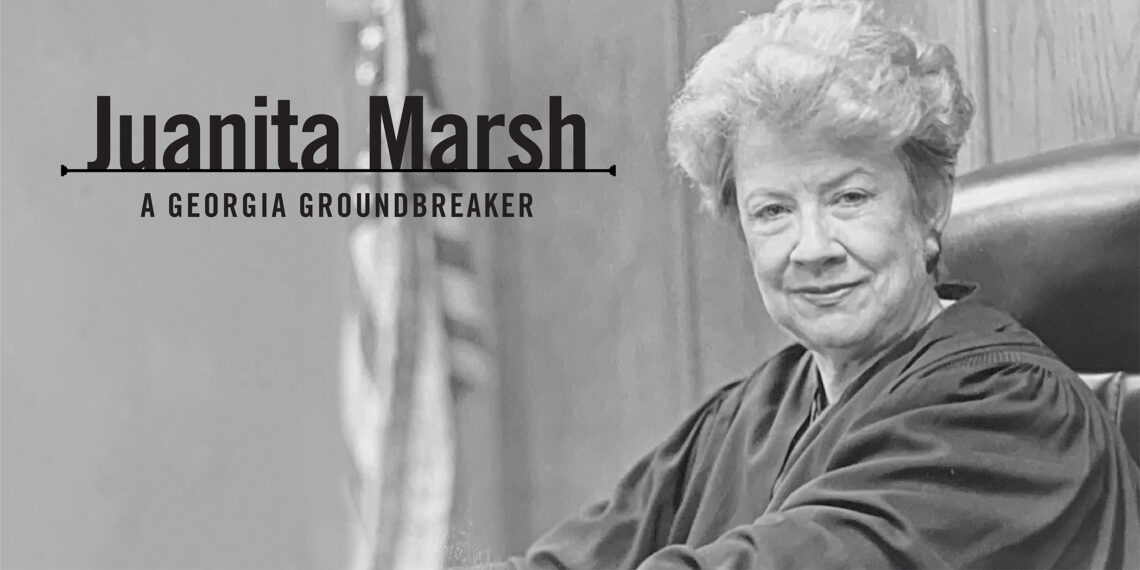 Juanita Marsh didn’t take the path expected of a woman born in 1926 to a family of sharecroppers in the small town of Elberton, Georgia.

Marsh was a smart child and was allowed to skip some of her cotton-picking duties to read books. She graduated first in her class at Centerville High School, earning her a scholarship to the University of Georgia, where she was a good student, worked in a dining hall called the Beanery and learned the fight song – which she was apt to sing often and loudly throughout her life.

She went on to become the third female judge in Georgia’s history, and her judicial reach expanded when she wrote the early handbook for Municipal Court judges and served on the Judicial Council of Georgia.

Marsh also founded Anchor Hospital, a substance abuse facility in Atlanta, which had a deep impact on the lives of many struggling with addiction.

One especially prominent guest of Anchor was Lyle Prouse, a longtime Northwest Airlines pilot who was the first commercial pilot to be arrested and sent to prison for flying while intoxicated. He credits Marsh and his time at Anchor for his recovery. “Juanita’s care, personal attention and support were invaluable,” Prouse said.

Her journey to becoming a judge

Despite her humble upbringing, her son Charles Bradford “Brad” Marsh isn’t surprised by the impressive scope of her life’s work. “Mother wouldn’t take no for an answer. And nobody told her no,” said Brad, a 1981 UGA graduate and attorney in Atlanta. “She was very Southern, very polite but she also understood things. The University of Georgia had given her an education on how the world works.” 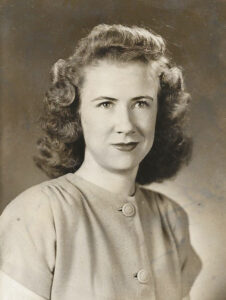 Marsh also had a lifetime’s share of moxie. “She was very determined,” said Brad. “I’m sure she got her slights along on the way, but she never stopped trying.”

Brad said his mother loved her time at the university. “Athens was transformative for her. She would always say that she wouldn’t be where she was unless she’d had that kind of experience.”

After graduating in 1946 with a degree in home economics, Marsh worked as a home demonstration expert in Statesboro, Georgia, where she met her husband, George Marsh.

When George went to law school, she decided to go too, attending night school at Woodrow Wilson Law School in Atlanta. In 1951, she was admitted to the bar, still rare for a woman at the time. But there weren’t many opportunities for women in law, so she worked as an elementary school teacher and raised her four children — Brad, Blake, Sherry and Elliott — and would occasionally help people with divorces or adoptions. 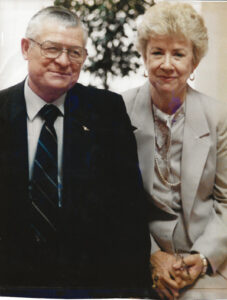 In 1971, she was selected by Mayor Ralph Presley as judge of the City Court of College Park. Although she’d only been practicing law on the side, Marsh was well-respected and very involved with the community. Still, she wasn’t an expected choice. “I think he was very prescient,” said Brad. “He said, ‘You’ve got a law degree, you need to be the judge.’ That didn’t happen in 1970.”

She quickly made the courtroom her own. “Most people see only a municipal court during their life. And they get their impressions of state courts from what they see here. My court has all the dignity of a superior court,” said Marsh in a 1985 article in the Clayton Extra.

“She handled herself with so much confidence,” said granddaughter Ashley Tyndal, a 2007 UGA graduate who visited Marsh’s courtroom as a child. She remembers her grandmother in full judge regalia commanding a room full of men. “It was an impressive scene. She was in charge of the whole room. I was impressed by her confidence and her role as a judge.”

Marsh had a lot of traffic violations come through her court, many of them involving substance abuse. But instead of punishing the defendants, she sought to route them into treatment programs. She understood that people weren’t solely their mistakes, perhaps due to an experience she’d had at UGA.

When Marsh was a student in the ’40s, she was caught out past curfew one Friday night. And, worse, she was wearing blue jeans. “Can you imagine? A girl wearing blue jeans?” said Brad with mock horror. But it actually was a big deal back then.

Marsh was brought before the board and was going to be removed from school until Dean William Tate stepped in and gave her another chance. “My mother thought he hung the moon. She’d say ‘Dean Tate saved my life,’” said Brad. Marsh saw how getting a second chance could change the course of someone’s life. 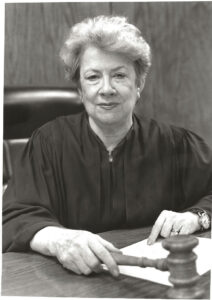 As a judge, Marsh gained a reputation for being tough but unbiased. “Taking pains to be fair, she doesn’t read the court docket before she puts on her black robe and strides into court for fear of being prejudiced by police reports,” according to the Clayton Extra in 1985.

“She knew that people do things sometimes in private that are not approved,” said Brad. “She would always give somebody the benefit of the doubt.”

But Marsh was no pushover. “She may be soft-hearted in life, but when she gets on that bench she listens carefully and can be tough,” her husband once said.

“She meted out punishment,” said Brad. “My buddies from high school would say. ‘Your mother did so and so to me.’ And I’d say, ‘Well, you probably deserved it.’”

Marsh’s compassion and willingness to see substance abuse as a problem to be worked on rather than a character defect changed many people’s lives. “I can’t even count how many times I was with her and someone said ‘Judge Marsh, thank you so much for what you did for my son or my husband.’ They would pull her aside, say thank you and have a sincere, genuine conversation,” said Tyndal. “I knew that she was good and doing good work based on those encounters.”

Founding a hospital for substance abuse

Marsh decided to start Anchor Hospital partially because of the people she encountered in court, but also because her son, Blake, had struggled with substance abuse for years.

“When you presented an issue to her, she tried to find a solution and fix the problem,” said Brad. Although she never gave up on Blake, she wasn’t able to save him, something Brad calls “one of the big tragedies in her life and, I think, the only regret she ever had in her life.” 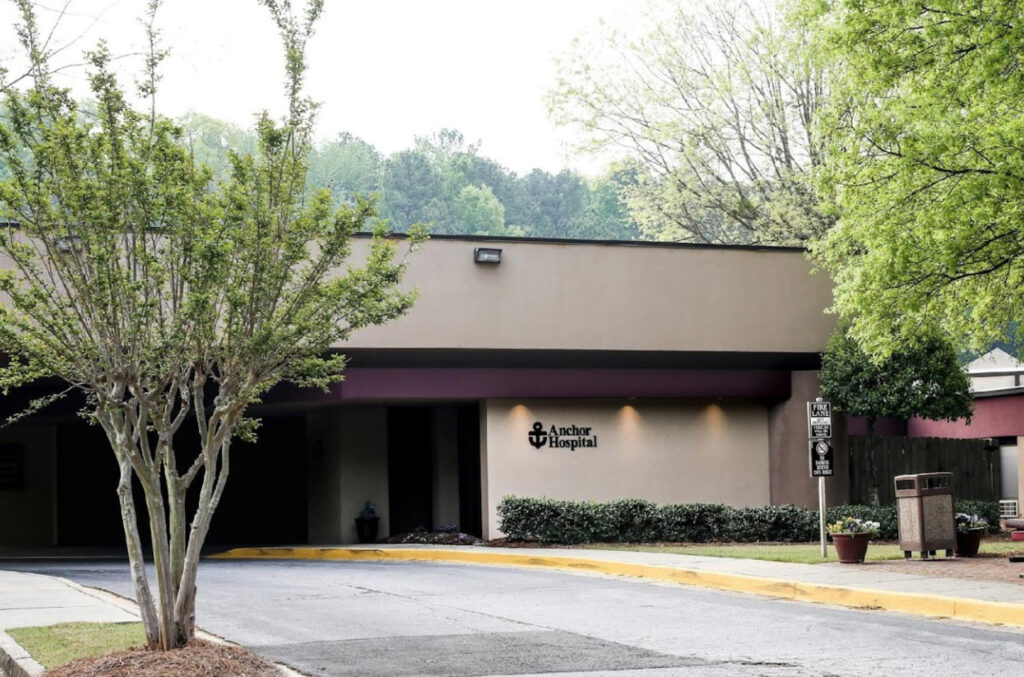 She did save countless others through her work at Anchor Hospital. “Mother was there all the time. She would tell her story and basically love them back to recovery,” said Brad, noting that she did it while respecting their anonymity.

“When she died so many people came to me and said, ‘Your mother saved my life. I needed a break and she gave me an opportunity by allowing me to get some help and treatment,’” said Brad.

When pilot Lyle Prouse arrived at Anchor, he wasn’t exactly an eager guest. He’d hated a previous experience with a recovery group years before. “I didn’t just waltz in and say, ‘Oh boy, I’m sure glad I’m here,’” said Prouse, who wrote about his experience in his memoir “Final Approach.” “I was convinced it was a cult.” But his story had been widely reported and he’d hit a public rock bottom. “I had taken such a hard hit that I shut up and listened.” 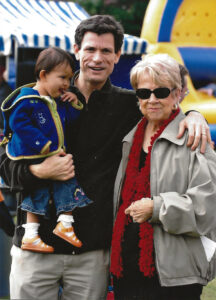 Juanita Marsh with her son, Brad, and his daughter, Sarah.(Submitted photo)

“I met her maybe my first or second day. She visited with me quite a bit,” recalled Prouse. “I was pretty destroyed and devastated.” Marsh told a shaken Prouse that everything was going to be OK. “I needed to hear that because I couldn’t visualize it and I wasn’t so sure that it actually was going to work out.”

It did. Now over 28 years sober, Prouse has devoted his life to helping others overcome alcoholism. He returned to Northwest Airlines and in January 2001 he received a full pardon from then-President Bill Clinton. Marsh and Prouse remained friends for many years.

Marsh came across as every bit the charming Southern woman. “She had a soft Southern genteel accent that just exuded class,” recalled Prouse. But, as Brad put it, “She could, in the parlance, hang with anybody.” 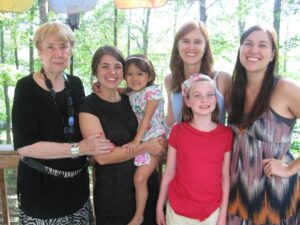 “Being able to travel between worlds – whether divided by gender, race or class – takes a certain set of skills. “You have to have confidence in yourself, be interested in other people and work to make things happen in the worthwhile way,” said Abit Massey, President Emeritus, Georgia Poultry Federation, and 2016 recipient of the UGA President’s Medal. As the first man elected to serve on the board of Georgia Women of Achievement, Massey did a sort of reverse Juanita Marsh. “She looked for opportunities to help and seized those opportunities.”

Marsh’s embrace of all types of people came from her time at UGA. “She would always tell me that at University of Georgia you’d meet somebody from every little town and hamlet throughout Georgia. It’s a big place but she knew people from all over the state and she always felt like that was her window to the world. It really made a big difference to her,” said Brad.

Marsh lived life on her own terms. “She was a risk-taker,” said Brad. “The risk-taker in her allowed her to go to people and say, ‘I need $10 million to build an alcohol and drug detox center.’”

“When the news came to her in 1972 and asked her what she thought about women’s equality, she said ‘Why would I give up superiority for equality?’” said Brad. “And that’s her. Her attitude was, I’m not doing this to show I’m equal, I’m doing this because I’m a person.”

When Marsh was asked by the Atlanta Journal-Constitution in 1991 what she’d like her epitaph to be she said, “Equal justice for all. I have tried to treat everyone equally.”