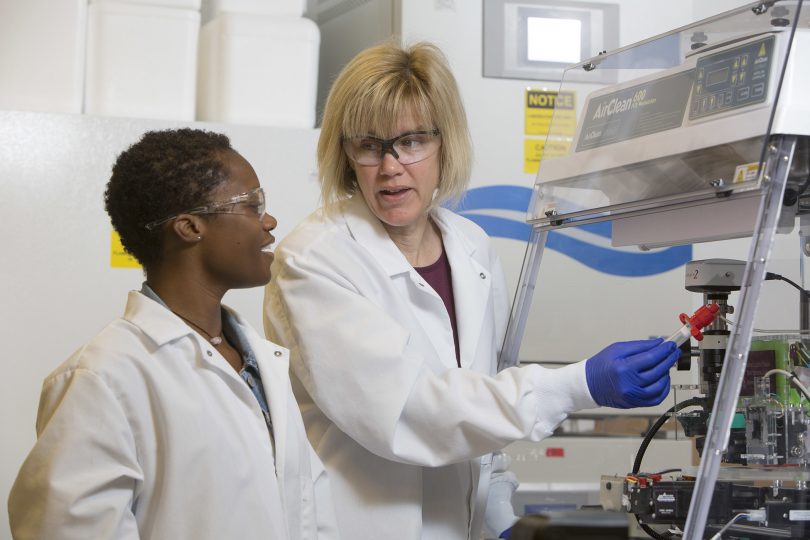 She brings ‘exemplary record of leadership experience’ to research enterprise

Karen J.L. Burg, a noted researcher in tissue engineering and regenerative medicine with an outstanding record of academic leadership, has been named vice president for research at the University of Georgia.

“Continuing to grow our vibrant research enterprise is a top priority of the University of Georgia,” said President Jere W. Morehead. “Dr. Burg is an accomplished scientist, inventor and collaborator, and — as vice president — she will be poised to lead our institution to higher levels of research productivity, extramural funding and impact on our state, nation and world.”

Burg was recruited to UGA in 2016 as the Harbor Lights Chair in Small Animal Studies as part of Morehead’s Presidential Extraordinary Research Faculty Hiring Initiative, which brought several internationally recognized scholars to campus. At UGA, she leveraged her experiences as a member of the National Science Foundation Innovation Corps for Learning national teaching team to provide input toward UGA’s successful I-Corps site application. She has served as a member of the university’s Innovation District Task Force, the Innovation District Faculty Advisory Council, the 2025 Strategic Planning Committee and the Aspire Alliance IChange Team, which is working to enhance faculty diversity.

As vice president for research at Kansas State, a position she held from 2014 to 2016, Burg oversaw research policy and strategy for three campuses and five major extension sites. Under her leadership, Kansas State saw a 6% increase in research expenditures and laid the foundation for its designation as an Innovation and Economic Prosperity University by the Association of Public and Land-grant Universities. (UGA was one of 16 universities to receive the initial designation in 2013.) She also led a university-community partnership that was cited by the University Economic Development Association and other organizations as a model for how universities can help faculty more effectively engage with industry.

Burg served in a number of leadership roles at Clemson University, including interim vice provost and dean of the graduate school, interim vice president for research and innovation, and founding director of the Institute for Biological Interfaces of Engineering.

“As a distinguished researcher and academic leader, Dr. Burg brings an exemplary record of leadership experience to the critical role of vice president for research,” said S. Jack Hu, UGA’s senior vice president for academic affairs and provost. “Whether working with students or leading multidisciplinary teams of researchers, she has consistently combined a commitment to the success of individuals with a broader vision for promoting discovery and innovation.”

Burg’s research focuses on tissue engineering and regenerative medicine, with implications for diagnosing and treating diseases such as cancer. Her research has been supported by more than $20 million in grants from agencies such as the National Science Foundation and the Department of Defense, as well as organizations such as the Howard Hughes Medical Institute. She is the author of nearly 120 peer reviewed journal publications and the co-author of four books and nearly 40 book chapters. She holds nine U.S. patents, one of which forms the basis of a company that uses 3D cell culture technology to model and predict how tumors will respond to cancer drugs.

Burg’s work also has focused on enhancing science and engineering education, with emphases on mentoring, introducing underrepresented minority students to bioengineering research, and expanding participation in STEM innovation and entrepreneurship. She has served as the primary research advisor to more than 50 students at the master’s and doctoral level and has extended research opportunities in her labs to scores of undergraduate students.

Her national and international engagement includes serving on the editorial boards of several journals, serving on the board of directors of the National Academy of Inventors and serving as a steering committee member of the International College of Fellows of Biomaterials Science and Engineering.

“It is an exciting time to be at UGA as we grow research, creative works and innovation and as we extend our capabilities through community and business partnerships,” Burg said. “I look forward to collaborating with faculty, staff and students to further UGA’s impact.”

Burg’s honors include receipt of a Presidential Early Career Award for Scientists and Engineers and designation as an American Association for the Advancement of Science-Lemelson Invention Ambassador. She is a fellow of the American Association for the Advancement of Science, the Biomedical Engineering Society, the International Union of Societies for Biomaterials Science and Engineering, the American Institute for Medical and Biological Engineering, the National Academy of Inventors and the American Council on Education.

A 19-member committee chaired by Donald Leo, dean of the College of Engineering, helped identify finalists for the position. The committee was assisted by the executive search firm Isaacson, Miller and the UGA Search Group in Human Resources.