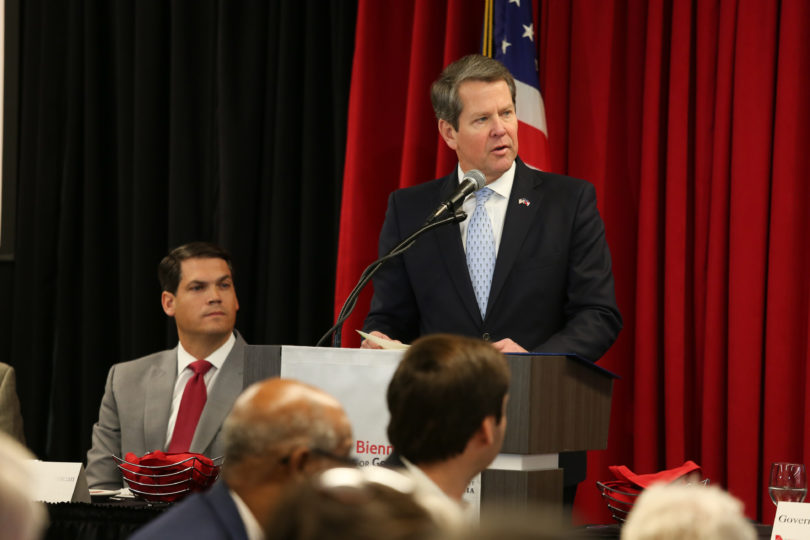 Members of the Georgia General Assembly convened at the University of Georgia Dec. 9­–11 for the Biennial, coordinated by UGA’s Carl Vinson Institute of Government to help lawmakers prepare for the next legislative cycle.

More than 200 incumbent and newly elected members of the Georgia House of Representatives and Senate attended presentations at the UGA Center for Continuing Education & Hotel on topics such as rural development, school safety and transportation.

The three-day event culminated with Kemp’s luncheon address. In his first public policy speech since being elected Nov. 6, Kemp said he will appoint a Georgians First Committee to provide private-sector input on ways to keep Georgia’s economy growing and will strive to promote public safety, strengthen education and expand health care — particularly in the state’s rural heartland.

“We all want what’s best for the families we serve,” he said. “We will create a lasting legacy of success when we put hardworking Georgians first.”

The Carl Vinson Institute of Government has coordinated the Biennial Institute since its inception in 1958 and it continues to be an anticipated event on the Georgia political calendar. As in past years, the 2018 Biennial offered the first opportunity following the elections for veteran and freshman legislators to come together as a group in advance of the legislative session, which begins Jan. 14.

Almost all of the state’s 56 senators and 180 representatives attended the Biennial Institute, including more than three dozen who will begin serving their first terms in the legislature in January. The Biennial offered these freshmen legislators the chance to network with their new colleagues and learn more about key matters they will face as they begin to represent their constituents in Atlanta.

The Carl Vinson Institute of Government, a UGA Public Service and Outreach unit, has coordinated the Biennial for 60 years, working with the Georgia General Assembly to organize and assemble the resources and expertise needed to carry out the planned events. The Institute provides customized assistance, applied research and professional development for government leaders and employees across Georgia and internationally.

The Biennial has always been held at the UGA Center for Continuing Education & Hotel, also a UGA public service and outreach unit.