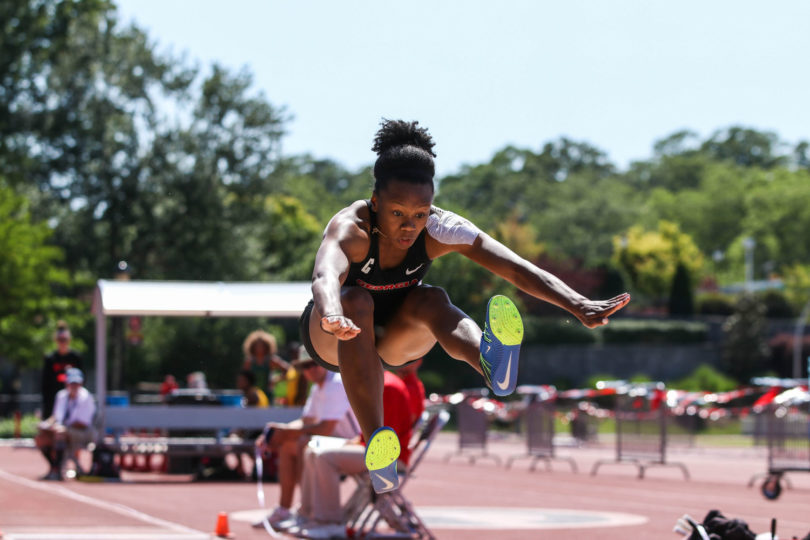 The 2018 NCAA Woman of the Year, Keturah Orji AB '18 is the first woman to win eight individual national titles in field events. (Photo by Cory A. Cole)

When she realized she could give the boys a run for their money in a foot race, Keturah Orji decided to join her high school’s track and field team. Now, the former UGA national champion and U.S. Olympian has been named the 2018 NCAA Woman of the Year.

The NCAA Woman of the Year award recognizes graduating female college athletes for their academic and athletic excellence, as well as their commitment to community service and leadership.

No stranger to success, Orji AB’18 earned nine individual SEC championships. She is the first woman to win eight NCAA individual titles in field events and was named SEC Scholar Athlete of the Year in 2016 and 2018. She also was a major contributor to UGA’s 2018 national championship in women’s indoor track.

Orji spent four years competing in the long jump and triple jump for Georgia’s indoor and outdoor track and field teams. She says she knew UGA was where she was meant to be because of the people who influenced her on her first trip to campus.

“I really had fun with the team on my visit. I feel like the coach already had me, but when I went on my visit, the team was what really kept me here,” says Orji, who was track team captain as well as serving three years on the Student Athletes Advisory Committee.

Her accomplishments were not limited to the college ranks. At the 2016 Summer Olympics, Orji competed in triple jump—set the American record in the process—and finished fourth, the best result ever for an American woman in the event. Even though she has been recognized for all these accomplishments, Orji says the NCAA Woman of the Year is more than just an award.

“I’ve always been recognized for my athletic accomplishments but never for the other parts of me,” she says. “So to be recognized at the highest level for the total package of who I am was really exciting, and I was just honored to win that.”

Orji is currently pursuing a master’s degree in kinesiology at UGA and is focused on staying healthy and consistent in her sport. She hopes to make the 2019 World Championships team and aims to compete in the 2020 Olympics.

While Orji always pushes herself to be the best at her sport, she knows people look up to her, and she says it’s important to stay motivated and understand sports aren’t the only things in life that matter.

“Being named NCAA Woman of the Year shows that life isn’t just about sport,” she says. “Sometimes I feel like people put a lot of pressure on themselves to be the best athlete in the world, but life is bigger than just winning competitions and games.”