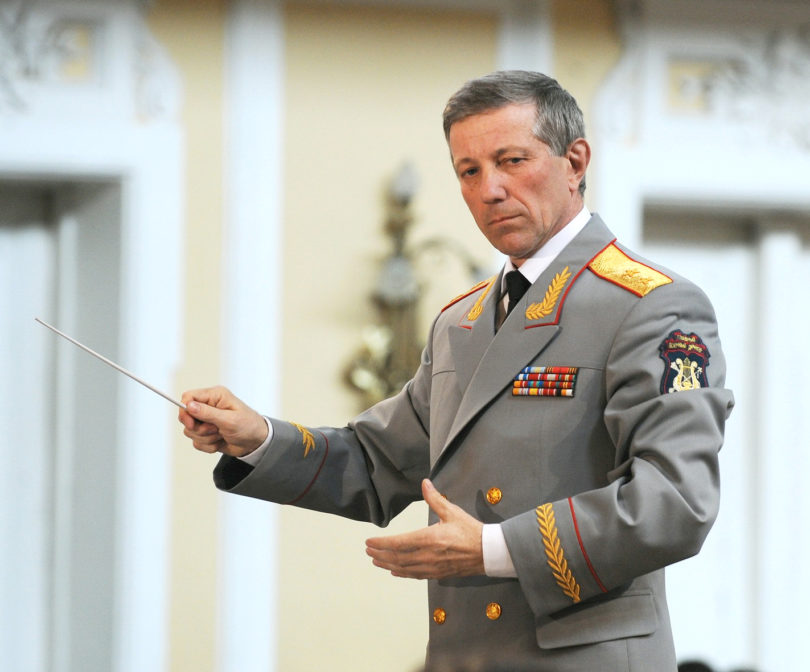 The Hugh Hodgson School of Music is no stranger to acclaimed international guests, but even for them, it’s rare they host an artist who has led an entire country’s military bands.

Lt. Gen. Valery Khalilov, former chief conductor and senior director of music of the Military Band Service of the Armed Forces of Russia, will visit the University of Georgia from Nov. 8-16, sitting in on classes, working with students, conducting ensemble performances and taking in the Classic City.

Khalilov, who composes as well as conducts, is internationally recognized as Russia’s most distinguished military band and orchestra conductor. He holds the title of Honored Artist of Russia and has conducted performances in many countries throughout the world, including Austria, Belgium, Germany, Hungary, Korea, Lebanon, Mongolia, Poland, Finland, France, Switzerland and Sweden.

“Gen. Khalilov is a remarkable musician, a major figure in the musical life of Russia,” said Dale Monson, director of the Hodgson School. “I watched him in performance on Red Square with hundreds of marching soldiers as well as in the concert hall conducting a wonderful orchestra in a performance of Rachmaninoff’s second piano concerto-extraordinary in every way.”

Khalilov has overseen the music for many spectacular events in Moscow. In 2010, he conducted a massed band of more than 1,200 musicians at the Victory Parade in Red Square. At the conclusion of the event, he led a performance that included bands from the U.S., Great Britain and France.

Since 2007, Khalilov has been the music director of the International Military Music Festival at Spasskaya Tower in Red Square. The two-week festival draws an audience of almost 100,000 people each year and has featured more than 140 performing groups from 40 countries during its 10-year history.

“Gen. Khalilov’s work has brought together scores of musicians from all over the world as ambassadors of peace and understanding,” said George Foreman, director of the UGA Performing Arts Center. “This visit is in that same vein-opening a cultural dialogue that can enrich lives.”

Khalilov’s visit will be a multi-faceted tour of the university, including educational opportunities with School of Music students, performances with the UGA Symphony Orchestra and Hodgson Wind Ensemble-which will perform three of Khalilov’s own works-and even attendance at the Georgia-Auburn football game.

“His willingness to work with our students at UGA will be a marvelous opportunity for all to learn under the baton of a great ensemble leader,” said Monson. “This sort of cultural exchange-in a medium that all understand-is the sort of outreach that builds trust and cooperation.”

The Hugh Hodgson School of Music at the University of Georgia is a rising national leader in musical education and performance. With over 300 undergraduate and 200 graduate students, the School of Music trains the music performers, educators, scholars, composers and therapists of tomorrow with world-class facilities, unparalleled instruction and hundreds of performance opportunities each year.