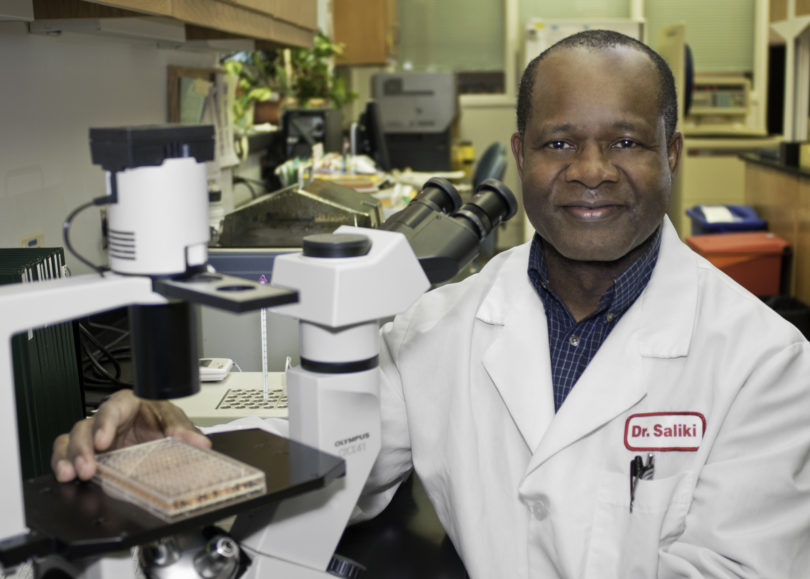 Athens, Ga. – The University of Georgia Athens Veterinary Diagnostic Laboratory, based at the College of Veterinary Medicine, played a key role in identifying the cause of the “unusual mortality event” for bottlenose dolphins announced this week by the National Oceanic and Atmospheric Administration.

Now they’re urging people who find dolphins stranded along the coast to report the sightings but not to touch the animals.

“The morbillivirus detected in these animals and the culprit of this outbreak is not zoonotic, which means it has not been proven to transmit from animals to people,” said Susan Sanchez, a professor of infectious diseases at UGA.

“Nevertheless, marine mammals may have secondary infections or be infected with other pathogens that do readily transmit to people. Therefore, we urge individuals who find stranded animals to not touch the animals and to not allow their pets to touch these stranded animals. Instead call the local state wildlife officials and report the finding.”

Earlier this week, a group of scientists working in conjunction with NOAA identified dolphin morbillivirus as the cause of the unusual mortality event.

Morbillivirus is a genus, or subgroup, of viruses within the family of paramyxo viruses. Each group of animals has its own morbillivirus.

Marine mammal morbilliviruses have never been known to infect people or other marine life, said Jerry Saliki, a virologist who is head of the Athens Veterinary Diagnostic Laboratory and oversees its virology and serology sections. Saliki participated in an NOAA news conference held Tuesday.

Hundreds of dolphins have been found dead in the mid-Atlantic region since early June, with elevated population strandings reported in the waters off New York, New Jersey, Delaware, Maryland and Virginia. Reported strandings also have increased off the North Carolina coast.

The Athens Veterinary Diagnostic Laboratory is one of three laboratories in the U.S. with the ability to test tissue samples at the molecular level to identify morbillivirus.

Volunteer stranding networks, based in coastal states, work with NOAA to monitor the seasonal patterns of marine mammal strandings, explained Saliki, who also is a professor of infectious diseases. When there is a significant increase in reported strandings, NOAA determines whether to classify the event as an unusual mortality event. Samples are collected by the stranding networks and sent to laboratories at UGA, the University of Florida and the University of California, Davis for diagnosis.

“In this case, all three labs received samples from the same mortality event. We did our testing independently and came to the same conclusion, which was dolphin morbillivirus,” Saliki said.

“All we can say now is that we’ve seen this in the past, but we can’t say yet whether there is a pattern, because in the U.S. coastal waters this is only the second event,” Saliki said. “We have morbilliviruses all the time. They are always present. What is unusual is this massive die off from the same area within the same period of time.”

The Atlantic bottlenose dolphins are currently swimming south for the winter, and dolphin strandings have thus far occurred as far south as North Carolina. It is unknown whether the illness will continue southward as the population migrates.

“We have ruled in dolphin morbillivirus as the cause of this event, but we have neither investigated nor ruled out any possible co-factors,” Saliki said.

To come to the diagnosis of dolphin morbillivirus, samples were submitted to the Athens Veterinary Diagnostic Laboratory.

Samples in situations like these usually include fresh tissues from organs such as the brain, lung and lymph nodes, Saliki said. Once in the lab, the nucleic acid-or viral genome-is extracted from the samples. The nucleic acid is then amplified several thousandfold using a process known as polymerase chain reaction, or PCR. The product yielded by this process is then sequenced, and scientists compare the obtained sequence to referenced sequences in GenBank, a national repository of gene sequences from various microorganisms.

The lab’s Molecular Biology Section, headed by Sanchez, was responsible for most of the diagnostic work on the samples submitted to the lab.

The lab has been conducting morbillivirus testing since 2006, shortly after Saliki joined the UGA College of Veterinary Medicine. Under his leadership, the lab created the Marine Mammal Diagnostic Service, which consists of three components: serology, which is the detection of specific antibodies, molecular testing and pathology services.

The services are available to scientists, government agencies, aquariums and mammal stranding and rehabilitation centers from around the globe.

“We have received samples from areas of the Middle East, China, Hong Kong, Singapore, Australia, Portugal, other countries and from throughout the United States,” Saliki said about the service’s work in general. In the U.S., the Athens Veterinary Diagnostic Laboratory has contracts to provide services for both NOAA and the U.S. Navy.

In addition, the lab has three unique serology tests—serum neutralization tests—for morbillivirus that Saliki has developed through the years, one each for dolphin morbillivirus, porpoise morbillivirus and phocine (seal) distemper virus.

Athens Veterinary Diagnostic Laboratory
The full-service UGA Veterinary Diagnostic Laboratories, located in Athens and Tifton, provide comprehensive diagnostic services to veterinary clients for all domestic and non-traditional animal species including aquarium, laboratory, marine and zoo/exotic animal species. In addition, the labs provide surveillance testing for endemic and non-endemic diseases in cooperation with state and federal agencies, including transmissible spongiform encephalopathies. The faculty conducts research on animal diseases, improved diagnostic methods and other conditions that have an impact on food safety and public health. For more information, see http://www.vet.uga.edu/dlab/.