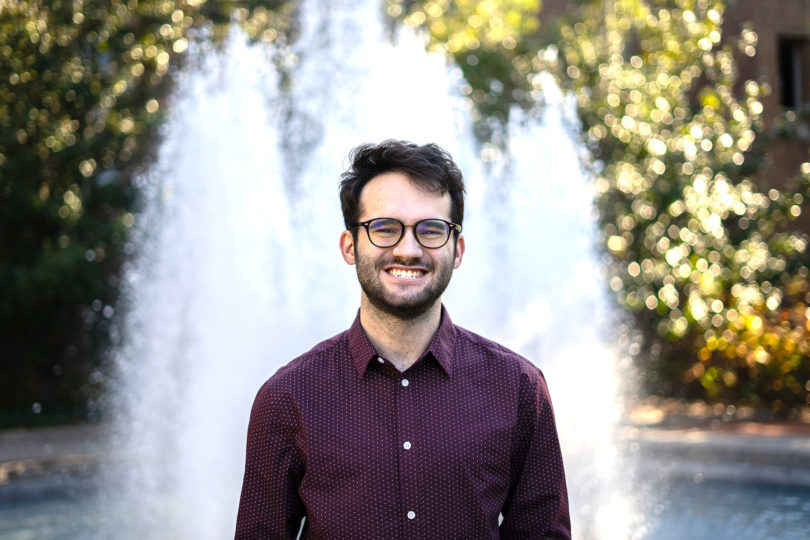 Landon Clark, from Leesburg, is a third-year Honors student who is majoring in biochemistry and molecular biology, genetics and biology. (Photo by Stephanie Schupska)

University of Georgia Honors student Landon Clark is among 396 undergraduates across the nation to be recognized as Barry Goldwater Scholars, earning the highest undergraduate award of its type for the fields of the natural sciences, mathematics and engineering.

Clark, from Leesburg, is a third-year CURO Honors Scholar who is triple majoring in biochemistry and molecular biology, genetics and biology.

Since 1995, 61 UGA students have received the Goldwater Scholarship, which recognizes exceptional sophomores and juniors across the United States.

“The University of Georgia is proud of Landon and pleased that he is extending our record of success in this prestigious competition,” said President Jere W. Morehead. “Already as an undergraduate student, he is helping UGA fulfill our commitment to conduct research that helps people lead longer, healthier lives.”

This year, recipients were selected from a field of more than 5,000 college sophomores and juniors who were nominated by 461 academic institutions nationwide. Each awardee will receive up to $7,500 toward the cost of tuition, fees, books, and room and board.

“I am thrilled for Landon, who is absolutely one of our very best students,” said David S. Williams, associate provost and director of the Honors Program, who serves as the UGA campus faculty representative for the Goldwater Scholarship. “As a CURO Honors Scholar, Landon was recruited to come to UGA because of his promise as a researcher. This Goldwater award and recognition proves that his hard work is paying off. I look forward to watching his career continue to blossom in the future.”

Since his first weeks as a UGA freshman in August 2017, Clark has conducted research in the lab of Michael Terns, Distinguished Research Professor of Biochemistry and Molecular Biology. He researches the complex processes of CRISPR-Cas immune systems through a model archaeal organism, Pyrococcus furiosus. Now a junior, he has collaborated on three different projects, co-authored a paper, and mentors other undergraduates in this field.

Last summer, he worked in the translational research lab of H. Trent Spencer, a professor of pediatrics and director of the gene and cell therapy program at Emory’s Winship Cancer Institute. There, Clark researched immune diseases and potential gene therapy techniques. In 2017, he also conducted research on sociological variables influencing educational inequality with Dawn Robinson, a professor of sociology at UGA.

Clark is a Crane Leadership Scholar, director of academic outreach for the Student Government Association, director of internal communications for UGA Red Cross, an exam writer for UGA Science Olympiad Outreach, co-president of the Biochemistry Undergraduate Society, co-president of the Omicron Delta Kappa National Honor Society, and treasurer of the Honors Program Student Council. He also volunteers in the neuroscience and cardiology units at Piedmont Athens Regional Medical Center.

Clark has presented his research at 10 conferences. He also studied neurology and cancer biology through UGA’s Studies Abroad Program in Cortona, located in Tuscany, Italy.

The scholarship honoring Sen. Barry Goldwater was created to encourage outstanding students to pursue careers in the fields of mathematics, natural sciences and engineering. Since its first award in 1989, the Barry Goldwater Scholarship and Excellence in Education Foundation has bestowed 8,628 scholarships worth more than $68 million.