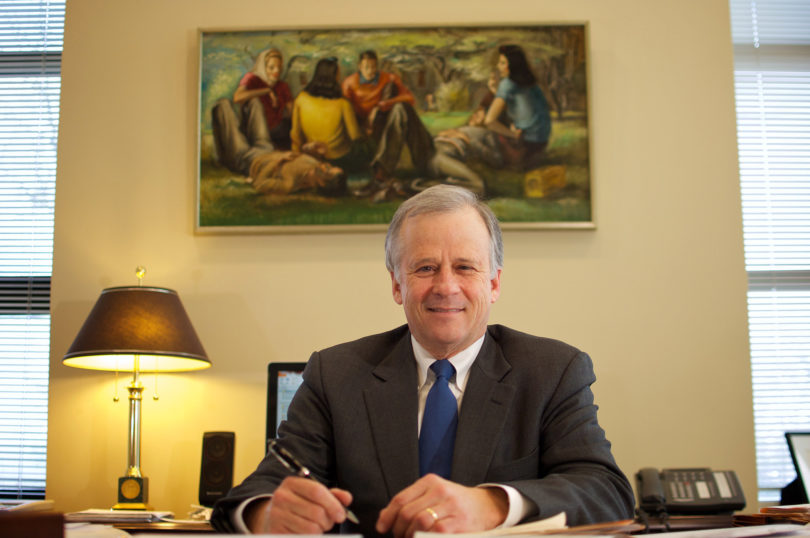 Tom Landrum’s undergraduate experience at UGA proved to have such an impact on the future vice president for development and alumni relations that he came back as an alumnus to serve a 38-year career on campus.

As a UGA undergraduate, Landrum was active in a full range of student activities including campus politics, University Union and the Pandora Yearbook, where he met his wife, Susan. Landrum, who will retire from his post June 30, graduated from UGA in 1972 with a bachelor’s degree in history.

After working a stint in public relations at Lander College in Greenwood, S.C., Landrum returned to Athens in 1976 to accept a position in what is now known as the UGA Public Affairs Division. Shortly after that, Landrum and Susan were married. The two worked at the university together for more than 35 years; Susan retired as executive assistant to the provost two years ago.

As he rose through the ranks in the Public Affairs Division, eventually serving as director, Landrum became involved in a capital campaign-the Bicentennial Fund-the university was preparing to launch. That was the first time he interacted with the fundraising programs at UGA.

“It was the first comprehensive campaign in UGA history, and it was a success. After that the whole idea of how higher education public relations works with development became something of interest to me,” Landrum said. “It intrigued me.”

The topic interested Landrum so much that his master’s degree in journalism was focused on the relationship of fundraising and public relations practitioners at state land-grant universities.

Before reaching his current post, Landrum spent time working as an assistant for the vice president for development and university relations, followed by executive assistant and chief of staff roles for former Presidents Charles B. Knapp and Michael F. Adams.

“Throughout all of that time I gained a better understanding of what a state land-grant university means to its alumni, its constituencies and its students,” he said. “I learned more about that aspect of the profession than I could have ever learned in any classroom.”

Since 2008, Landrum has worked to advance the university’s interests by securing gifts from its alumni and friends. To do that, he has led a development and alumni relations team, a gift accounting and financial services group, and a special events team. His office also has oversight of the Career Center.

Landrum and his fundraising program currently are engaged in the nucleus phase of an eight-year comprehensive campaign, yet unnamed, that has a working goal of not less than $1 billion.

“I have been fortunate to have worked with leaders both external and internal to the university,” Landrum said. “I’m proud to have been part of so many team efforts that have advanced excellence at UGA.

“In particular, it has been satisfying to have been part of a team that has generated gifts and commitments in excess of $100 million a year for every year since 2006, and that has set new records in annual giving.”

Landrum also said he is proud to have re-launched the Parents and Families Association within the development office. In 2010, he worked to establish a UGA Board of Visitors to enhance the university’s presence in the Greater Atlanta area.

Landrum also oversaw efforts to launch two new alumni relations programs—the Bulldog 100 and 40 Under 40—to recognize young and emerging alumni leaders. During his tenure, he also provided leadership in merging the Arch Foundation with the UGA Foundation to create a single, unified foundation for the university.

Landrum said that while he had opportunities to leave UGA for other lines of work, he always felt he had new challenges to tackle at the university.

“My work was always, in my mind, fresh and new,” he said. “I never felt the need to pull up stakes and go to another campus since I had the opportunities here.”

Having put in more than 40 years in higher education, Landrum said the time is right for him to look at other opportunities.

“I feel like I’m young enough to have a second career in any place that I would like to go,” he said.

This summer, Landrum will return to the University of Heidelberg to teach students about American language and culture. He’s done the one-month stint three times before and enjoys being able to travel and immerse himself in another country’s culture.

While he’s in Europe, Landrum feels his successor, Kelly Kerner, will be in good shape. Landrum said the next vice president for development and alumni relations “will be extremely fortunate to be a development and alumni relations officer for a university that is clearly on the rise with support from its alumni, friends and constituencies; there is an unlimited potential for future success in so many areas.

“[Kelly Kerner] will instantly realize, just like I did, that this is a great place to work with quality people who are deeply invested in the success of this university,” Landrum said.