UGA teaches aspiring entrepreneurs what it takes to start a business

The fourth floor of Creswell Hall looks pretty much like your typical residence hall, but the students living here are far from typical. They are all entrepreneurs: risk-takers who want to turn their ideas into businesses.

Many of them already have.

Jared Zengo of Oconee County started a business making art installations out of Rubik’s Cubes, and has sold his art to Oriental Trading Company, which is owned by Warren Buffett’s holding company, Berkshire Hathaway.

Hannah Abdulhaqq, a fashion merchandising minor from Douglasville, started a clothing resale business and has a website to sell clothes.

Alex Deltchev, a chemistry major from Oconee County, started a landscaping business in high school. Now, after following an interest in the video editing software Adobe Premiere Pro, he has a business that creates music videos and Snapchat filters.

These three first-year students are a part of the Launch Pad, a new living learning community created to spark innovation. Students applied to live in the Launch Pad this spring after being accepted at UGA, but before starting classes. They had to write a brief essay describing their entrepreneurial goals, and share stories about their own startups, if applicable. The group—14 men and 12 women—represents a wide cross section of campus. Many of them are engineering and STEM majors.

Zengo signed up for the program because he was interested in both business and computer science. He’s majoring in computer science, but using the Launch Pad entrepreneurship program to learn about business.

“I grew up building computers for nonprofits, like Free I.T. Athens. I love entrepreneurship,” Zengo said. “I get that feeling when I think of an idea. Someone’s never done this before. I can make this a real thing. And that gives me a rush to keep on going.” 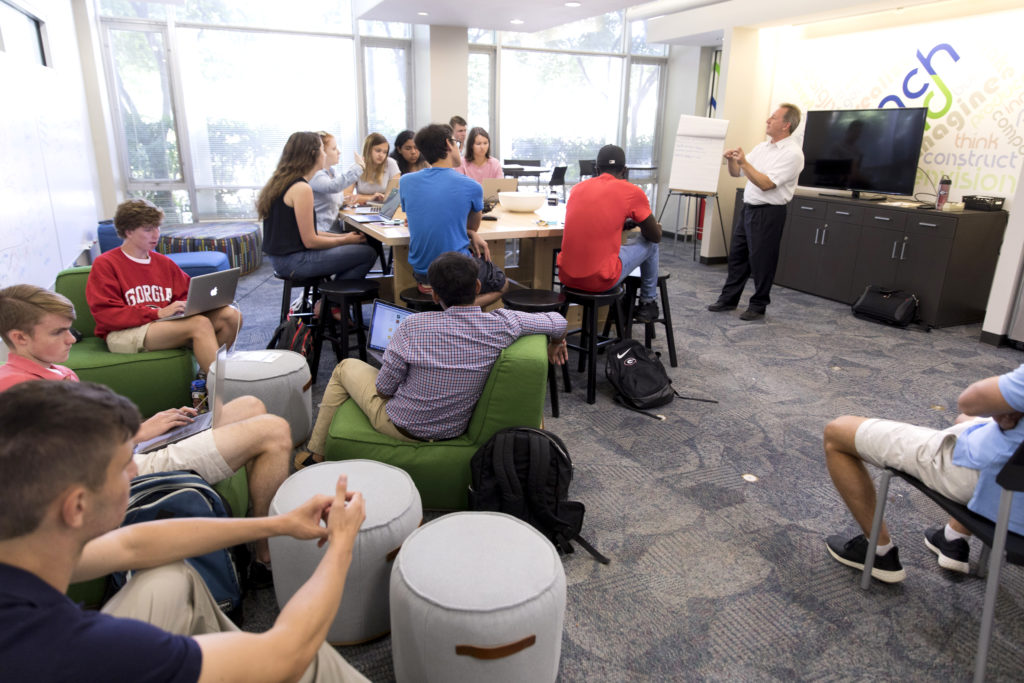 Students in the program take a First-Year Odyssey Seminar, where they learn all about being an entrepreneur, from the initial idea to growing a business. They have keycard access to their own co-working space off the lobby on Creswell Hall, where one of the Odyssey classes meets. The co-working space and maker space is stocked with tables and stools, sofas and ottomans, snacks, a refrigerator and a 3D printer. Launch Pad participants also have other perks including membership in the Four Athens Tech Incubator, membership in the Society of Entrepreneurs and opportunities to meet one-on-one with successful entrepreneurs.

“Entrepreneurs come and talk about how they started and how they kept on going,” said Zengo. “And they each teach a different life lesson. Some of them blew it out of the water instantly, while others didn’t really. They failed, and then they kept on trying to improve. And they ended up succeeding.”

And rejection is a subject stressed in the seminar taught by Don Chambers or Cali Brutz, lecturers and associate directors of the UGA Entrepreneurship Program.

“When you’re looking to be an entrepreneur, and start up an idea, it’s hard,” said Chambers to the class. “Don’t be discouraged if we push on you. Don’t take it as ‘that’s a stupid idea’; that’s not the case at all. It’s hard. If it were easy, none of us would be in college. We’d all be zillionaires coming up with ideas. So keep trying. If the first idea, the second idea, doesn’t work, that’s fine.”

For a class for freshmen who are only a few weeks into the semester, the class is fast paced.

“Why are ideas no good?” Chambers asked the class.

After a discussion on customer discovery, the class breaks into groups to come up with open- ended questions to ask potential customers. They’re all working on different group projects—building apps, websites, doing marketing for a neck pillow—to work through what it takes to start your own business. 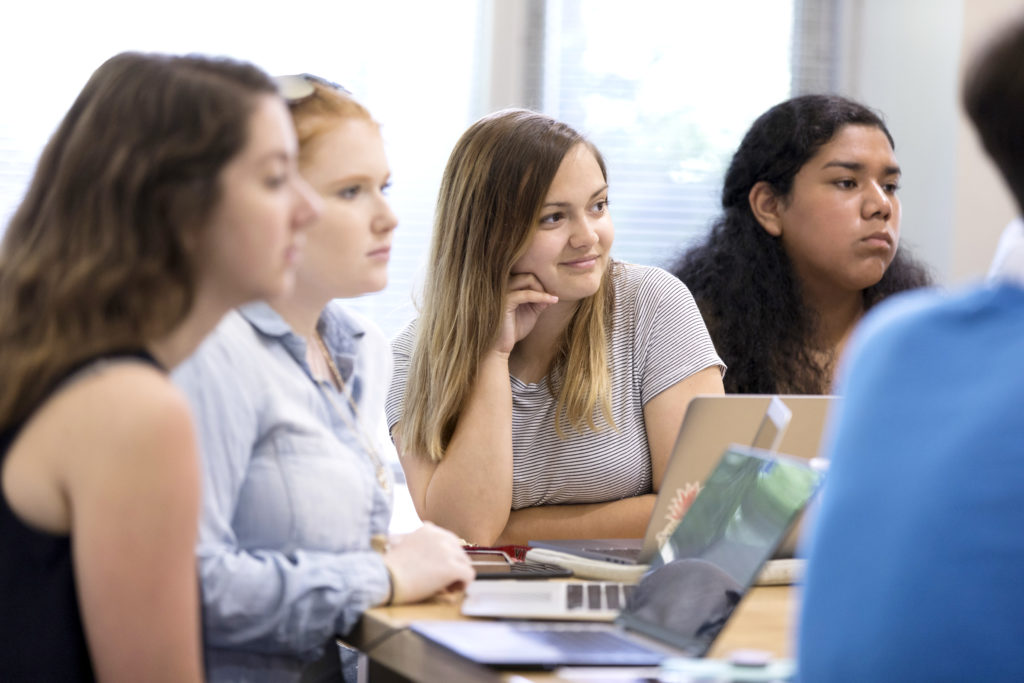 “So far the coolest thing I’ve learned I think is just how much goes into building a business,” said Peters. “Because I’ve been working for Chick-fil-A, I’ve been learning about businesses that are already established. It’s been nice to learn about how ideas turn into businesses and how much it takes—how many different types of people are needed to even start thinking about a potential business.”

Peters also likes the camaraderie of the Launch Pad community.

“I immediately had 25 friends. We hang out all the time,” she said. “I get to hear their ideas and give my input. They’re all pretty honest about my ideas and what they think I could improve on, and it’s been nice to just be able to interact with these people that have different interest in different majors.”

Abdulhaqq said the program is a small, tight-knit community. “I don’t have that many freshman classes, because I came in with 50 credit hours and am in a lot of junior level classes,” she said. “Having the other freshmen I can relate to is really helpful.”

But mostly the program has reinforced her entrepreneurial spirit.

“This had made me realize that I can do bigger things than just reselling clothing,” she said. “I could have a corporation and run it right now and start it.”

In fact, Ethan Boos and Charley Sun from the program are currently working their first business possibility through the eight-week-long UGA Idea Accelerator.

“The Entrepreneurship Program at UGA has been designed to be very hands-on,” said Bob Pinckney, director of entrepreneurship at UGA. “Entrepreneurship can be described as a contact sport—you have to be in it to truly learn how to be successful at starting and running your own business. We work hard to provide opportunities for students to learn and experience entrepreneurship through doing. From the Harvard case studies and speakers in the classroom to the Accelerators, Pitch contests, and Georgia Kickstart Fund, UGA is building one of the top entrepreneurship programs in the country.”

The program will grow from this inaugural class of 26 with room for around 50 students in the next cohort. Applications for the Launch Pad will open in spring for incoming freshmen.