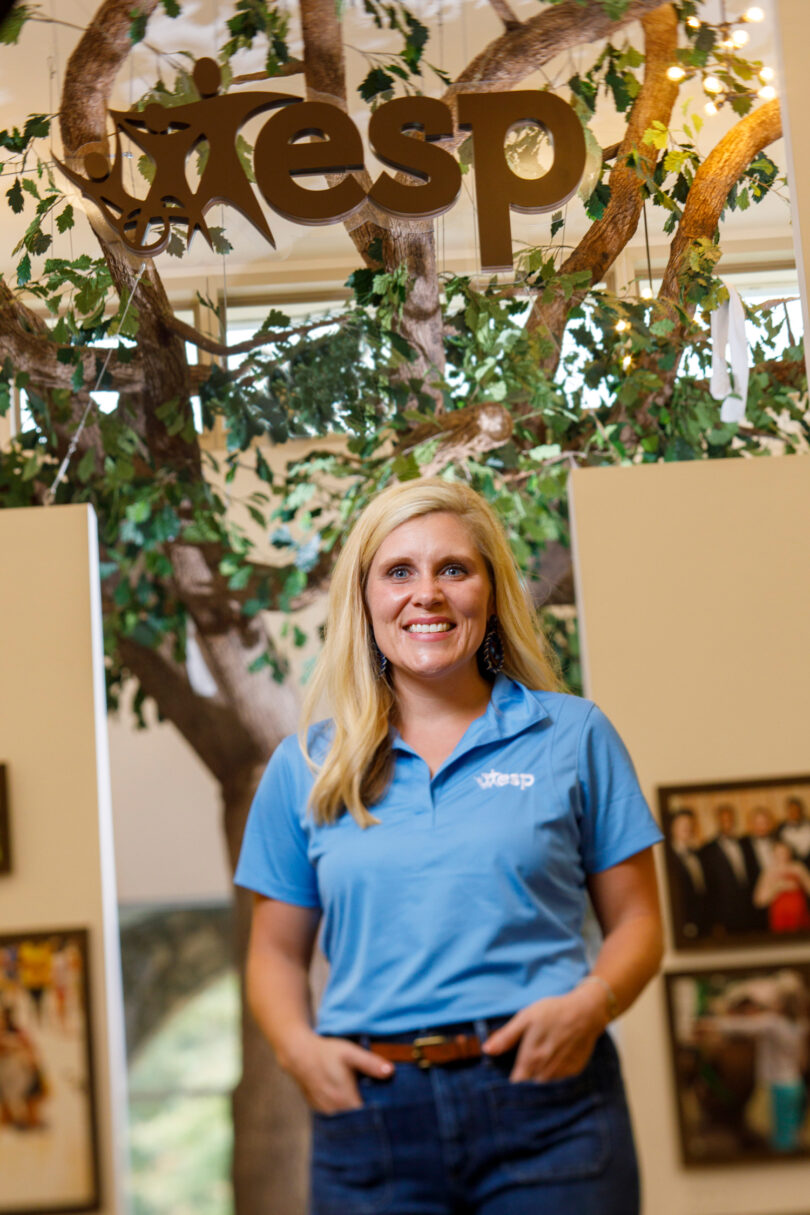 Laura Whitaker’s job is all about joy.

There’s joy she finds in the children and young adults that Extra Special People works with and spreading that joy to their families and the community.

Since she was 19 years old, Whitaker BSEd ’07, MEd ’10 has been executive director of the Watkinsville nonprofit, which provides summer camps and other programming for individuals with disabilities and their families. What started as a summer job as a camp counselor in 2003 turned into something more when ESP’s founder and director Martha Wyllie passed away from pancreatic cancer that fall.

“Sometimes you choose your job and sometimes it chooses you,” she says.

Under Whitaker’s leadership, the nonprofit has grown from one employee to 18 full- and part-time staff, from a gym and a donated trailer to a 14,000 square foot building, from serving 60 individuals in summer camp to 600. ESP grew from holding just summer camp and one Saturday of programming a month to serving 175 students in their daily after-school programs. And through it all, ESP has worked to help individuals and families develop their abilities and not focus on their disabilities.

“We as adults can be disenchanted with difference. We can feel awkward engaging with people with disabilities,” she says. “We feel nervous talking to someone with Down syndrome and might miss the opportunity to see the joy with which they see the world.

“People with disabilities have unmatched abilities—a joy that is transformative.”

And to spread that joy in the community, Whitaker co-founded Java Joy, in 2016. Now franchised across the nation, Java Joy is a fleet of mobile coffee carts operated by people with disabilities called joyristas. Businesses and organizations pay for the coffee carts to visit, and the joyristas serve coffee with a side of transformative joy. And beyond the hugs and smiles, it also puts disabled young adults to work.

Whitaker has grown with ESP over the years. She earned bachelor’s and master’s degrees in special education at UGA, got married, and had three children.

And while it took time to fully embrace the role as leader—for six years she referred to herself as camp director instead of executive director—she’s become a fearless champion for the organization.

When the pandemic hit, ESP didn’t close down; it expanded its mission. ESP called each of its 600 families, listening and providing new forms of emergency care to meet its families’ biggest needs. This resulted in 10,600 meal deliveries, 5 lunch parades, and 75 hours of virtual programs.

“We wanted to be sure our campers were not missing out on the magic of summer camp and the relief camp provides for families after these months of staying home,” Whitaker says. So ESP did safety trainings for its 100 camp staffers, had everyone wear face masks and face shields for double protection, took temperatures daily upon arrival, and spread campers (less than 30 per group) across six sites.

Through it all, Whitaker credits her accomplishments to humility and grit.

“As a 19-year-old leader, I needed help. I had to be humble and I had to have grit,” she says. “Sixteen years later and those traits still guide my leadership today. Without them, ESP would not be where it is.”