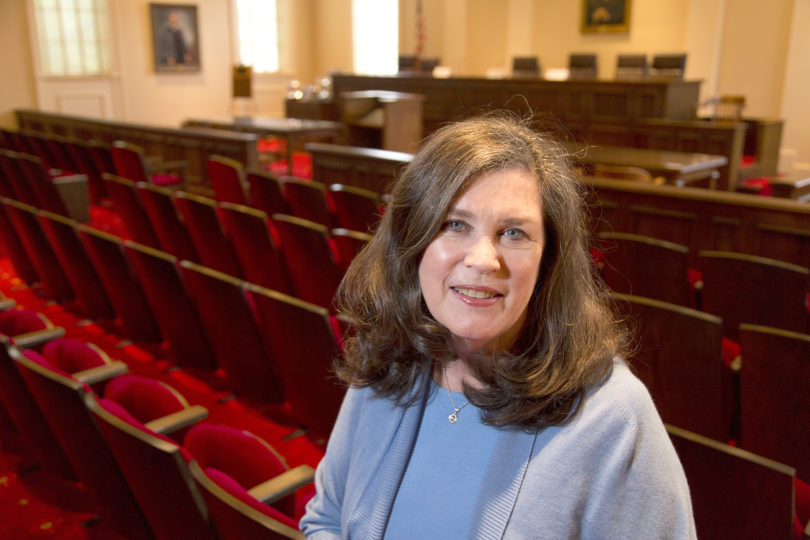 Athens, Ga. – The University of Georgia School of Law established the Rebecca Hanner White Scholarship, named in honor of White, who recently stepped down as the leader of the school after more than 11 years of service.

The scholarship was initiated by Kathelen V. Amos, Georgia Law 1982 alumna and law school board of visitors chair, and her husband Dan, who agreed to match up to $100,000 in new gifts donated to the school for the creation of the scholarship fund. To date, more than $210,000 in gifts and pledges have been secured from alumni and friends for this effort.

“I am so grateful that Kathelen and Dan Amos have helped to honor Dean Rebecca White,” said current Georgia Law Dean Peter B. “Bo” Rutledge. “Dean White inspired many to re-engage with the law school. It is a testament to Dean White and her record of leadership that members of the Georgia Law community responded so quickly and generously to this fundraising challenge. This effort was dedicated to one of her top priorities during her tenure-growing private funding for student scholarships,” he said.

White, who was the law school’s first female dean, served as the leader of the school from July 1, 2003, to Dec. 31. A few highlights of her deanship include:
• a multiyear, multimillion dollar facilities renovation.
• the hiring of more than 30 new faculty members that improved the student-to-faculty ratio and increased the scholarly output of the school.
• the elevation of entering law student academic credentials.
• the launch of a Business Law and Ethics Program.
• the creation of a new degree program (the Master in the Study of Law).
• the addition of six experiential learning programs.
• the establishment of study abroad programs at the University of Oxford and in China.
• the creation of approximately 40 new endowed funds to support student scholarships and faculty.
• securing private funding for building renovations and substantially growing contributions to the law school’s annual fund.

Specializing in labor and employment law, White remains on the law school faculty where she holds a J. Alton Hosch Professorship. White’s scholarship, cited by federal and state courts across the country, includes numerous articles on employment discrimination and labor law. In addition, she is a co-author of “Employment Discrimination” and “Cases and Materials on Employment Discrimination.” White also serves on the editorial board of The Labor Law Journal.

Before becoming dean of the law school, she served as associate provost and associate vice president of academic affairs for UGA from 2002 to 2003. In 2000, White received the Josiah Meigs Teaching Award, UGA’s highest honor for teaching excellence. She has been selected by law graduates six times as the recipient of the Faculty Book Award for Excellence in Teaching and has also received the John C. O’Byrne Memorial Award for Contributions Furthering Student-Faculty Relations. She served as a UGA Senior Teaching Fellow in 2000-01 and was inducted into UGA’s Teaching Academy. In 2002, she was selected as a Senior Faculty Fellow for the university’s Foundation Fellows program.