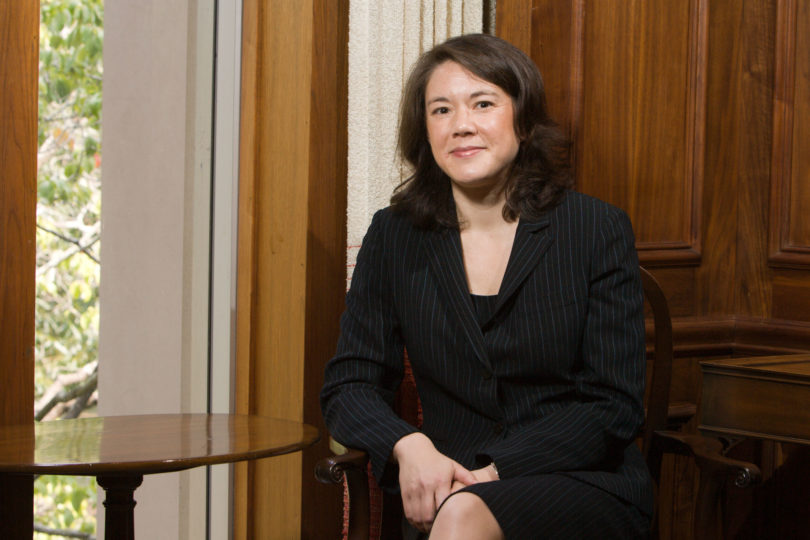 Prior to becoming a faculty member in the School of Law

Do you know that approximately 80 percent of criminal defendants in felony cases nationwide cannot afford a private attorney? Indigent defense is a problem most states are struggling with, according to Erica J. Hashimoto, an assistant professor in the School of Law. And she is doing her part to address the problem.

“The vast majority of people who are charged with criminal offenses can’t afford private legal counsel, so a lawyer is appointed to them,” she said. “However, many of those defendants are not well represented because the public defender offices and/or lawyers don’t have the resources they need to do a good job.

“It bothers me to think of somebody who is poor and can’t afford a lawyer being stuck with a really bad court-appointed attorney,” Hashimoto added. “I believe you cannot run a justice system if those defendants are not well represented.”

She hopes her research on public defender systems will improve the quality of those systems and shed some light on the problem. She also hopes to make a difference in the area of indigent defense through her role as a professor teaching courses in criminal law, evidence, sentencing, legal professionalism and ethics.

“It is important to me that once my students are lawyers, they do good things with all of their experience and all the knowledge they have,” Hashimoto said.

Prior to becoming a faculty member in the law school, Hashimoto served for four years as an assistant federal public defender in the Office of the Federal Public Defender in Washington, D.C. In this position, she gained significant trial experience representing clients charged with a variety of federal crimes. However, her desire to make a difference as a lawyer in the lives of the less fortunate actually took hold several years earlier, just after earning her undergraduate degree.

With her bachelor of arts in government degree in hand, Hashimoto began working in Boston doing gang mediation. She also worked as a community organizer in public housing organizing tenants so they could have more rights in the housing developments where they lived.

“I felt very strongly that there were a lot of things that needed to be fixed, and I didn’t have the tools to help the residents fix them,” Hashimoto said.

“I heard that if I went to law school I would have those tools. So, I went.”

Hashimoto’s favorite part about being a trial lawyer was working with her clients. She got to know them and their families which increased her already strong passion for fighting for them.

“I think a lot of people think of public defenders and they think ‘Why would somebody want to do that kind of work?’ But I really did, I loved my clients,” she said.

The decision to switch to teaching was a hard one, Hashimoto said, but she loved being an attorney so much that she wanted to pass that and her passion for indigent defense on to generations of lawyers to come. She said she really wants her students to not only care about what they are doing but also to love it and to make a difference.