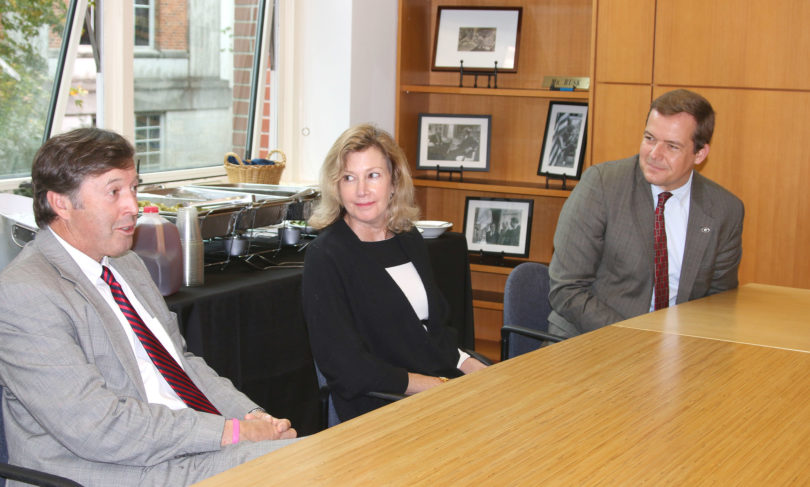 The Wilbanks Child Endangerment and Sexual Exploitation Clinic will open January 2016. Initial funding for the clinic has been donated by Georgia Law alumnus Marlan B. Wilbanks

Groundbreaking opportunity will aid victims, train next generation of attorneys

Athens, Ga. – The University of Georgia School of Law will be the first in the nation to have an experiential learning opportunity dedicated solely to the assistance of victims of child sexual abuse.

The Wilbanks Child Endangerment and Sexual Exploitation Clinic will open January 2016. Initial funding for the clinic has been donated by Georgia Law alumnus Marlan B. Wilbanks, who received his Juris Doctor in 1986. It is expected that many of the clinic’s first clients will be those now eligible to bring civil charges against their abusers as a result of the passage of House Bill 17, the “Hidden Predator Act,” by the Georgia legislature.

“The act of sexually abusing a child is the attempted murder of a soul. I can see no more important task than protecting those in our society who too often have no voice,” said Wilbanks, a longtime advocate for child protection issues. “The underlying goal of this clinic will be to educate, prepare and sensitize the next generation of lawyers as to the ways victims can be protected. On behalf of the children and families who would otherwise not be able to avail themselves of legal assistance, I applaud the University of Georgia School of Law for its willingness to be the first law school in the nation to draw a line in the sand against child sexual abuse.”

Wilbanks, who was recognized by the Taxpayers Against Fraud Education Fund as the 2014 Lawyer of the Year, is the second Georgia Law alumnus involved in the DaVita Healthcare Partners false claims settlement agreement earlier this year who has chosen to make a significant investment in training for future attorneys.

Professor Marci A. Hamilton of the Benjamin N. Cardozo School of Law, a nationally recognized expert on the subject of child protections and author of “Justice Denied: What America Must Do to Protect Its Children” on the need for child sexual abuse statute of limitations reform, confirmed both the uniqueness and need for such a program. “This will be the first law school clinic that responds to statute of limitations reform for child sex abuse and offers assistance to victims,” Hamilton said. “When reforms such as those recently enacted in Georgia are advanced, victims typically come forward who need advice and injunctive relief but whose case would not otherwise be picked up by an attorney in private practice. The University of Georgia School of Law is doing a great public service by assisting these victims and making it more likely that the public will learn the identities of even more hidden predators.”

Georgia’s Hidden Predator Act created a two-year window of relief from the statute of limitations for bringing civil charges in the case of child sexual abuse. Regardless of when the abuse occurred, victims can bring suit against their abusers until the window closes on July 1, 2017. After that time, the law requires suits to be brought forward before the victim reaches 23 years of age or within two years of the time the victim makes the connection that sexual abuse caused current problems such as substance abuse or relationship difficulties.

“The passage of the Hidden Predator Act signaled a desire by our state’s elected leaders to open the doors of justice to the victims of child sexual abuse,” Georgia Law Dean Peter B. “Bo” Rutledge said. “We are honored to expand our public service footprint and help those in society who too often remain voiceless. In addition, this opportunity gives our students the chance to serve as advocates for those in our state without access to adequate legal resources. The generosity of Marlan Wilbanks will not only fund the initial phase of this transformative clinic, it will change the lives of the families touched by these crimes and shape the paths of bright aspiring attorneys.”

A nationwide search was launched last week to identify a director for the new clinic.