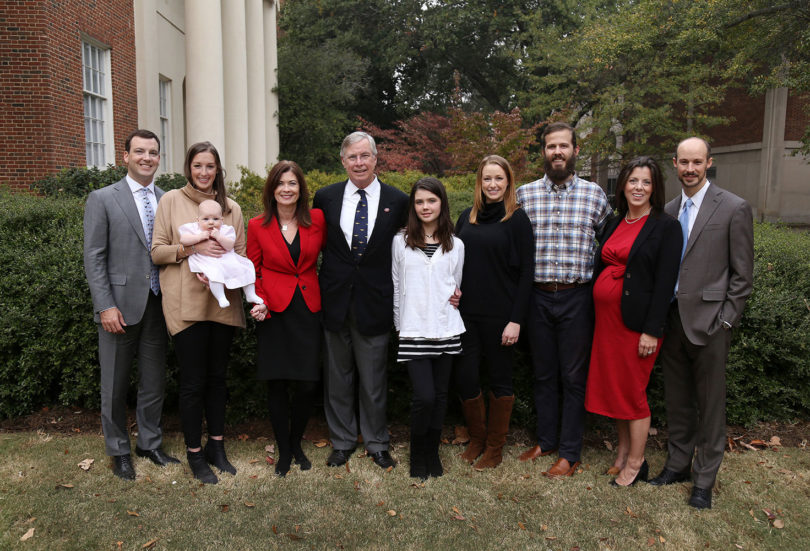 The Butler family attended the dedication of the James E. Butler Courtroom at the UGA School of Law. From left are Justin Patteson

The occasion also marked the portrait unveiling of Jim Butler. The painting, by artist Beth Stephens, now hangs outside the courtroom.

Jim Butler has had a large impact on the legal profession both inside and outside the courtroom. Four times over his career, he was lead counsel in a case setting the record for the largest verdict in Georgia. He has litigated cases in 31 states and served as lead counsel in five cases where the verdicts exceeded $100 million.

Jim Butler also has been a generous donor to the law school, establishing the James E. Butler Scholarship, assisting in the creation of the Sic Vos Non Vobis Scholarship and helping to launch the school’s Challenge Fund last year, which successfully doubled the law school’s annual fund in a single year and enabled Georgia Law to offer up to 66 new quarter scholarships to deserving students.

“Jim Butler’s investment in the School of Law is an investment in the people whom it produces and the values they will reflect as they join him in a noble profession,” Georgia Law Dean Peter B. “Bo” Rutledge said. “Thanks to his generosity, present and future law students will hone their advocacy skills and learn from judges in the courtroom bearing his family’s name—and be reminded of a great courtroom lawyer and the values he represents.”