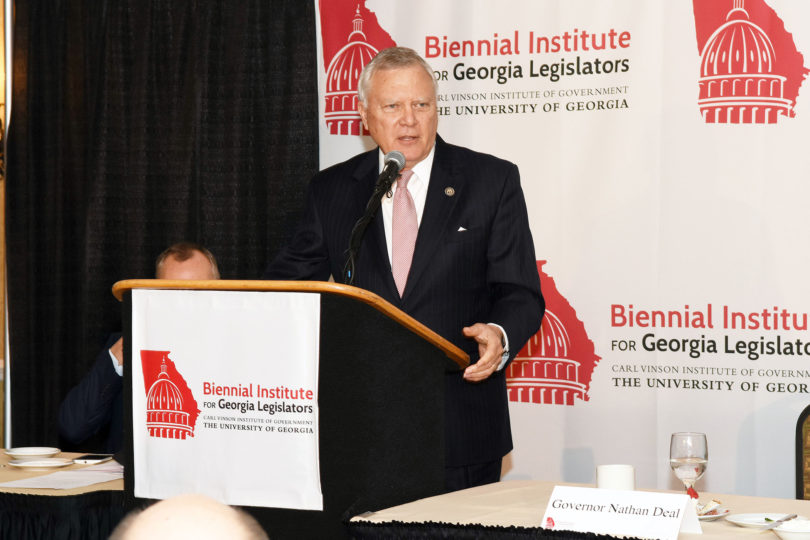 Georgia General Assembly members delved into critical state issues at the 30th Biennial Institute for Georgia Legislators, coordinated by the Carl Vinson Institute of Government to help lawmakers prepare for the 2017 legislative session.

The Biennial Institute, held Dec. 4-6 at UGA, concluded with Gov. Nathan Deal urging ­legislators to continue the programs that have made Georgia a national leader in job creation and economic vitality.

Georgia’s economy is among the country’s most robust because of infrastructure improvements the General Assembly supported, Deal told legislators at the Biennial Institute’s closing luncheon at the Georgia Center for Continuing Education.

“While much of the nation is seeing an economic slowdown, Georgia is moving forward,” Deal said.

The Biennial Institute came to order the afternoon of Dec. 4 with welcoming remarks by Lt. Gov. Casey Cagle, Speaker of the House David Ralston, UGA President Jere W. Morehead and Institute of Government Director Laura Meadows. Former Air Force chief of staff Mark A. Welsh III, now dean of the Bush School of Government and Public Service at Texas A&M University, delivered an inspirational keynote address on the importance of working on behalf of all citizens.

Bullock parsed the 2016 elections for lawmakers, and Wrigley described how the university system is increasing graduation rates while keeping enrollment costs in check. About 62,000 students graduated this year, up 14 percent from five years ago. Tuition remained unchanged, and the university system began offering free digital textbooks for many courses—saving students millions of dollars, he said.

The Institute of Government provides customized assistance, applied research and professional development for government leaders and employees across Georgia and internationally.