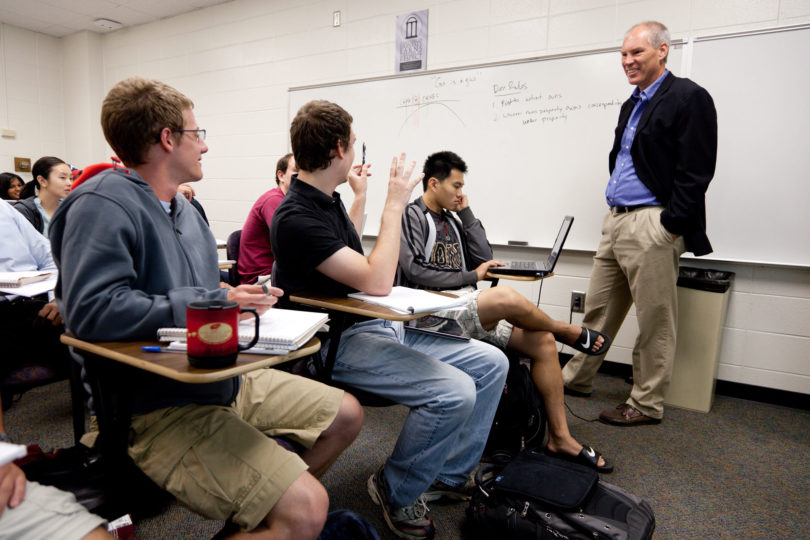 A new core curriculum structure adopted in fall 2010 exposes students at Terry College to a variety of issues key to business success.

The undergraduate program at the Terry College of Business ranks 50th nationally and 20th among public business schools in the latest issue of Bloomberg Businessweek. This marks the fifth time in six years that Terry has ranked among the top 25 public undergraduate business programs.

Overall positive survey responses from students propelled Terry’s climb from 24th among public undergraduate programs in 2011 to its current ranking of 20th in 2012. Businessweek’s student satisfaction poll comprised 30 percent of a business school’s total score, and high student satisfaction remains a driver behind Terry’s placement in the rankings. For the past three years, students have ranked Terry 18th, 21st and 18th. Students awarded Terry an “A” or “A+” in the categories of teaching, facilities and services, and job placement.

“The trend in what students are saying about us is very good because our student poll score isn’t just how students responded this year,” said Robert Sumichrast, dean of the Terry College. “Our total score for this metric combines the 2012 student survey results with the surveys conducted in 2011 and 2010.

“We believe our students are seeing the difference our new curriculum structure makes on their undergraduate experience,” he also said. “We adopted our Foundations First business core in fall 2010 and assigned students to one of two cohorts to help our faculty raise the bar academically and encourage a higher level of teamwork among the students throughout their academic careers.”

“Our revised business core consists of principles courses from the areas of finance, management, marketing and business statistics, in addition to two new foundations for business leadership courses added to the school’s core curriculum,” said Mark Dawkins, associate dean for academic programs of the Terry College. “These new courses expose students to a variety of ­issues key to business success, such as globalization, diversity, ethics and effective communication, as well as issues related to professional and career development.”