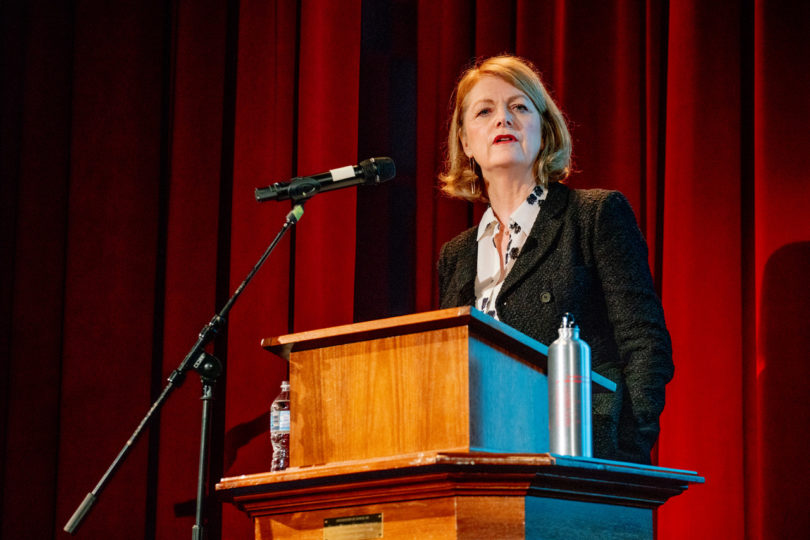 Stephanie McCurry spoke on Feb. 22 in the Seney-Stovall Chapel at a lecture titled “Reconstructing: A Georgia Woman’s Life Amidst the Ruins.”

“In the new age of global history,” Stephanie McCurry believes, “there is something to be said for adopting the human-scale perspective, not the global one: for reversing direction and seeing massive events from the perspective of a single life and a single place.”

McCurry, a Columbia University historian, did just that in her Feb. 22 lecture in the Seney-Stovall Chapel, “Reconstructing: A Georgia Woman’s Life Amidst the Ruins.” The talk considered the institutions and legacies of slavery from the point of view of Gertrude Clanton Thomas, whose 41 years of diaries offer a unique and deeply personal account of her life as mistress of a plantation near Augusta, and her experience of emancipation and reconstruction after the Civil War.

McCurry, who visited UGA for the history department’s Ferdinand Phinizy Lecture, an event in the Global Georgia Initiative of the Willson Center for Humanities and Arts and in the university’s Signature Lectures series, is preparing a book based on her research of 1,600 pages of Thomas’ diary manuscripts and other contemporaneous accounts and documents.

After the emancipation of some 4 million enslaved African Americans at the end of the Civil War, “people like Gertrude Thomas did not simply accept the loss of their racial privilege or surrender their possessive claims on the people they had owned,” McCurry said. “As everything was wrenched away, her response mixed grief, loss and rage in dangerous measure. Her personal history tells a larger story.”

Thomas’ greatest fear “was that her eldest son, deprived of education and put to field work like any ex-slave, ‘would now find as his equal or his better his father’s son by a woman a shade darker than his mother.’ ”

Thomas’ expression of that fear was a not-too-oblique acknowledgment of one of the unspoken horrors of slavery, McCurry said. “All over the American South, African American parents had to fight their old owners’ claims of possession and go to court to reclaim their children.”

These contests over family belonging could carry hidden freight.

“Every case [was] shot through with the power relations of masters and slaves, and sometimes generations of sexual violence,” McCurry added.

It was this particular dynamic of slavery that, as McCurry put it, “unmoored” Thomas at slavery’s end. After her father’s death in 1864, his will had made it clear that he had fathered a long line of children with at least one of the women enslaved by the family.

“There was nothing abstract about Gertrude Thomas’ crisis,” McCurry said. The enslaved woman’s sons and daughters were her half-siblings: “her father’s children by another woman a shade darker than her mother.”

As she put it early in her talk, “In dismantling slavery, emancipation showed just what it had been.”

And in presenting world historic events from one woman’s intimate, unguarded perspective, McCurry illuminated their human devastation with unusual
clarity.