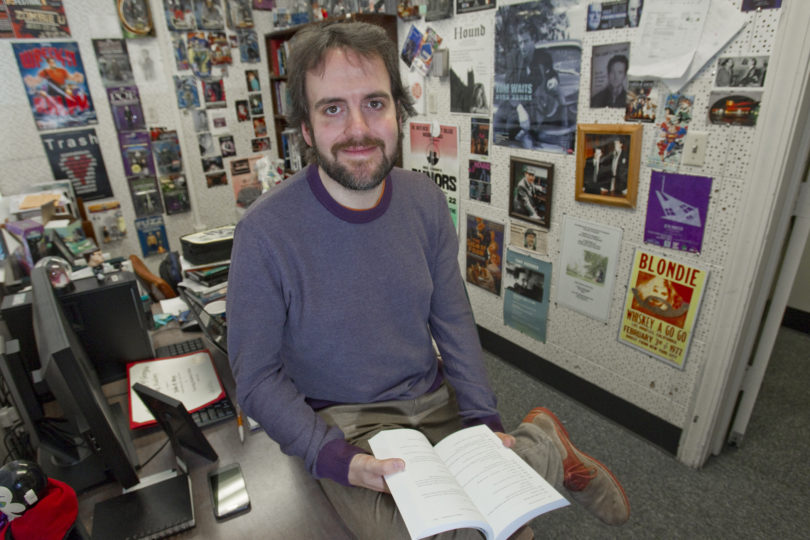 When John Patrick Bray watches a play he’s written being performed on stage for the first time, he gets very nervous. With eight of his own 10-minute plays being performed in Athens next month in Bray’s Plays, he’s in for some butterflies.

“I’ve joked with my students that if they go on a night when I’m there, they’ll know because they’ll hear me pacing in the balcony,” Bray said. “I’m terrible at watching my own plays.”

Bray, who earned a master’s in playwriting from The Actors Studio Drama School/The New School for Drama and a doctorate in theatre from LSU, originally wanted to be an actor when he started school. As a lecturer in the Franklin College of Arts and Sciences’ theatre and film studies department, he teaches the craft to aspiring playwrights and screenwriters. He also continuously is writing plays.

“I work on something every day, but there’s no regimented time that I do it,” he said. “When I was at school, one of my teachers recommended getting up at 5 or 6 in the morning to write and make it part of my day. I just couldn’t get into that.”

Instead, Bray allows scenes, characters and themes to come to him.

“I listen to a lot of music, so if I’m listening to music sometimes the image comes to mind. From there I might get the muse for something in a play,” he said. “Sometimes it’s just an entry in a dream journal or I see a scene in my head.”

“The only thing they might have in common is my own quirky humor,” Bray said.

Outside of teaching, Bray is working on a textbook about playwriting. He also runs the Athens Playwrights’ Workshop, a group that meets on alternating Mondays to discuss the process of writing. In addition he moderates Rose of Athens Theatre’s play reading series, which covers plays by students, Georgia writers as well as national playwrights.

All of the plays in Bray’s Plays already were written when Bray was asked to submit short plays to be performed on campus. One of the plays, On Top, even has been performed off-off Broadway for the last decade.

The New York native said he tries to write characters that he would want to play as an actor. After he’s written a play, he is fairly hands-off when it comes to casting, directing and the performance.

“I tend not to be the hovering kind of person,” he said. “I also have been very fortunate in my career that I’ve worked with terrific directors and actors, too.”

“I’m just as excited as everybody else to see the show,” he said. “When the directors are excited and the cast is excited, then I get very excited.”

Bray said his three years working with students at UGA have been wonderful.

“I love being here because I’m able to kind of bring together theories of playwriting, the practice of playwriting and pedagogy,” he said. “It’s just a really, really neat place where I’m allowed to experiment and have fun. The students have been so great, eager and willing.”