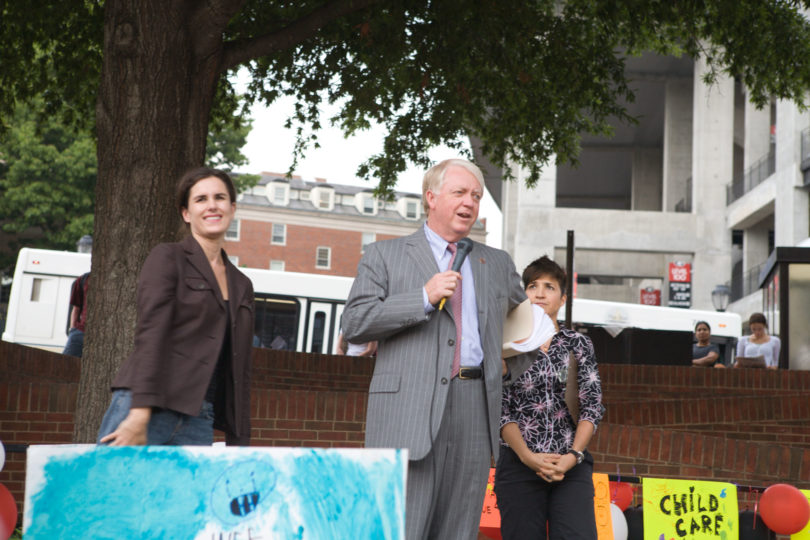 Chanting “Quality childcare, it’s only fair,” the crowd of faculty, staff and students—many with their children—attracted the attention of UGA President Michael F. Adams and Provost Arnett C. Mace Jr.

“I do get the message,” he said. “Clearly, it’s a legitimate need—something the university really needs.”

Adams said he understood their concerns that the McPhaul Child and Family Development Center, which provides childcare for only a small percentage of the university community, is inadequate, and said that the university is in the process of hiring a consultant to look into the best way to get improved childcare on campus.

He added that the potential project would be done “like everything else the university does—in a quality fashion.”

Held immediately before a University Council meeting, the rally was planned to show the administration that a lot of people really care about childcare on campus, according to Mattern.

Childcare has been an issue brought to both Staff and University councils for the past 10 years, she said.

Frick said that childcare is necessary for faculty and staff to do their jobs. In her speech at the rally, she said that childcare is critical for the university to stay competitive when recruiting top faculty members, and that it would help make the student body more diverse, improve employee productivity and provide tremendous educational opportunities.

Currently, the McPhaul Center has spots for 78 children, including less than 60 spots for infants and toddlers. The waiting list for the facility, which costs $180 a week, is 245 children, but has been as high as 400 children in the past, meaning that some children of the university’s 8,300 faculty and staff never get in, according to data provided by the McPhaul Center.

Mattern said the coalition’s goal is on-campus childcare that’s accessible to everyone physically and financially—with a sliding fee scale so that low-wage workers can afford to send their children there.

What she doesn’t want to see is another small center that’s not accessible to everyone. “It hasn’t been a top priority in the past,” she said. But now, she’s very hopeful that changes will be made.