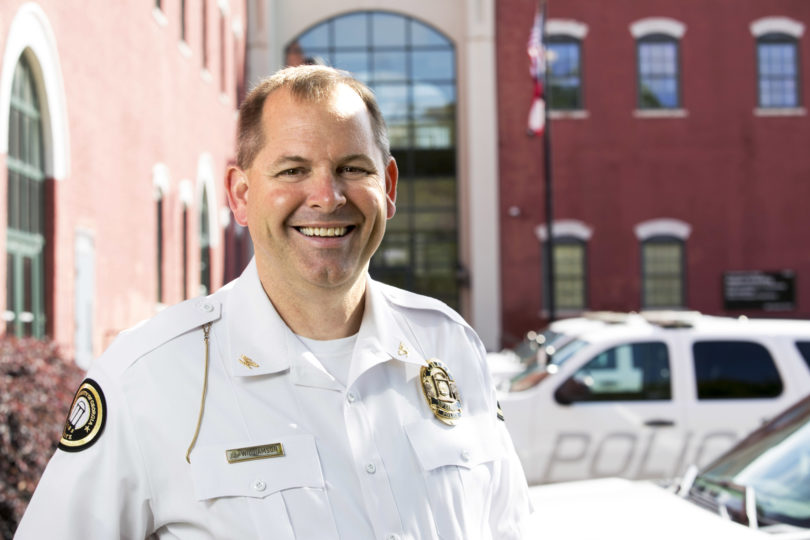 Jimmy Williamson will retire from the UGA Police Department on June 30 after 30 years in law enforcement with the University System of Georgia. (Photo credit: Dorothy Kozlowski)

When Jimmy Williamson retires June 30, he will have spent 30 years working in law enforcement for the University System of Georgia, all but two of them at UGA.

But when he first became a UGA police officer in 1988, he wasn’t planning for a career in law enforcement. He had earned an associate degree in agronomy at Middle Georgia College while working as a deputy in his local sheriff’s office and was now eyeing UGA’s turf management program.

Determined to continue working to put himself through school, Williamson joined the UGA police force and began taking classes.

“My grades suffered just a little bit, but I got it done,” he said, smiling.

Four and a half years later—taking only one extra semester to finish his degree—Williamson graduated from the university with a bachelor’s in agronomy.

But when he started looking for jobs in turf management, he realized that he had it pretty good in law enforcement and decided to pursue a career in it instead.

“I had actually gotten an offer and was hired by the Secret Service, but I was talking to the recruiter and asked him what the best thing and worst thing about the job was,” Williamson said. “And he said, ‘The worst thing is that I didn’t see my family. I didn’t see my kids grow up. I missed birthdays. I missed Christmases. I thought the job was great until about my
12th year when I was standing in the back of a ski chalet somewhere out west with the vice president because he wanted to go skiing for Christmas Eve at 4 a.m.”

At the time, Williamson wasn’t even dating, but he knew he someday wanted a family.

A little while later, his alma mater, Middle Georgia College, was looking for a police chief, so he applied for that position. He was only 25; the youngest officer on the force there was a solid decade older.

But Williamson got the job. After a year and a half there, though, he was ready for a change. Both UGA and Warner Robins police departments had captain’s positions open, but Atlanta had recently been named the host city for the 1996 Summer Olympics, and Williamson knew the games were an opportunity he shouldn’t pass up. He accepted UGA’s offer.

When it was announced that Sanford Stadium would host the women’s soccer final and that Stegeman Coliseum would be home to both gymnastics and indoor volleyball, Williamson got to work planning for the inevitable influx of people.

“I actually went to the World Cup to try to figure out soccer because we didn’t know much about it,” he said. “World Cup soccer is a whole lot different than Olympic soccer, but it was a good experience.”

Right before the Olympics started, Williamson was promoted to assistant chief of the department, a post he held until 2004, when he assumed his current position. Under his leadership, the UGA Police Department created a bomb squad, introduced K-9 units and implemented motorcycle units.

“We’ve done a lot of good things in the police department, but what I try to tell everybody is that I don’t corner the market on ideas,” he said.

UGA officers also were some of the first in Georgia to start wearing body cameras and to implement other progressive policing strategies.

Williamson also has emphasized the importance of building rapport with both the UGA and Athens communities, emphasizing that officers are “public servants with enforcement power.

“The quality of the staff we’ve built is probably what I’m most proud of. How do I know that we do quality work? Because I hear it continuously,” he said. “For the last eight to 10 years, our written compliments have outpaced our complaints over seven to one. People normally write when they’re really upset, so the fact that we’re getting written compliments, in emails and handwritten notes or cards, we know we’re doing something right.”

As for the future, Williamson plans to run for sheriff of Oconee County in two years.

“A lot of law enforcement agencies vow to protect and serve and are really good at understanding the protect piece, but the service side is what we forget. There are some things that I can bring to the table to increase the service level in Oconee,” he said. “And I’m too young not to do anything else.”