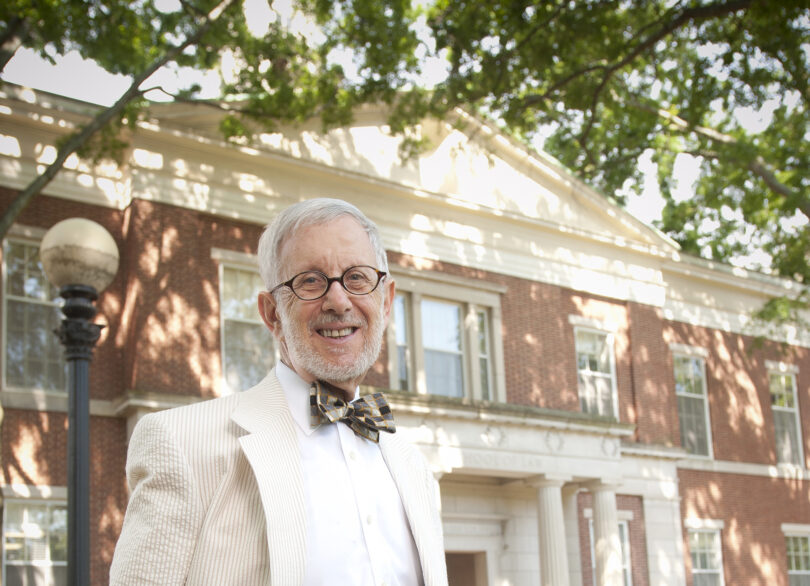 Paul M Kurtz is a professor emeritus and former associate dean at the UGA School of Law. (Submitted photo)

Alumnus Joey M. Loudermilk and his wife, Ramona, have established a premier scholarship to honor former Associate Dean Paul M. Kurtz at the University of Georgia School of Law.

Distinguished Law Fellowships provide some of the school’s brightest students unparalleled offerings while they earn their law degrees. In addition to financial aid, students receive an educational experience that may include domestic and international externships, guided research experiences as well as opportunities to meet some of the country’s top legal, business and government leaders.

“The bonds formed between faculty and students at the School of Law are very special and a tremendous source of pride,” School of Law Dean Peter B. “Bo” Rutledge said. “This newly created fellowship is a testament to those authentic connections, and I am very thankful to Joey and Ramona for choosing to honor one of the school’s longtime faculty members, who also served for many years as associate dean. Distinguished Law Fellowships help the school to provide first-rate learning experiences, and they contribute to the law school’s vision of being the nation’s best return on investment in legal education.”

The Kurtz Distinguished Law Fellowship will be a merit-based fellowship that will be awarded with preference given to students with superior academic records who have a demonstrated passion for supporting survivors of child sexual abuse and exploitation.

Regarding the establishment of the fellowship, Joey Loudermilk said: “Paul Kurtz and I started at the University of Georgia School of Law at the same time in the fall of 1975. He was a first-year law professor. I was a first-year law student. Professor Kurtz brought into the classroom a youthful enthusiasm for the law as well as a touch of humor which resonates with me to this day. That first year began a relationship which is now well more than four decades long as we have followed each other’s careers. We also share a passion for family law issues, dating back to when I attended his class on Domestic Relations. Ramona and I consider it a great privilege and blessing to honor Paul Kurtz in this way.”

Loudermilk, who graduated from the School of Law in 1978, currently serves as a Juvenile Court judge in Georgia’s Chattahoochee Judicial Circuit. Previously, he worked for Aflac Incorporated for 31 years, holding such leadership positions as general counsel, executive vice president and corporate secretary.

Kurtz said he was overwhelmed by having such an important and generous fellowship named in his honor. “I want to thank the Loudermilks from the bottom of my heart for creating this fellowship. Joey and I go back to the very beginning of my law school teaching career. He was an outstanding student and has long been a dear friend. The School of Law has been one of the most important institutions in my life, and I am thrilled to continue to be associated with it in this very special way.”

Kurtz, who specialized in criminal law and family law, was a faculty member at the School of Law for approximately 40 years. He served as the school’s associate dean from 1991 to 2013 and held a J. Alton Hosch Professorship for his last 19 years on the faculty. Shortly after retirement, he was granted emeritus status.

Kurtz is the co-author of “Criminal Offenses and Defenses in Georgia” and all six editions of “Family Law: Cases, Text, Problems.” Active in indigent defense reform, he served as a reporter for the Georgia Supreme Court’s Indigent Defense Reform Commission (2000-03), which was the driving force behind landmark legislation enacted in 2003, and as a member of the Public Defender Standards Council (2003-09). He was also a member of the Public Interest Loan Repayment Task Force that wrote legislation creating a state fund for this cause, which was passed by the Georgia legislature in 2002. Kurtz additionally held multiple positions with what is now called the Uniform Law Commission and was selected as a life member last year.

Modeled after the university’s Foundation Fellows program, the law school’s Distinguished Law Fellows initiative was created in 2016 by a gift from the John N. Goddard Foundation. Today, thanks to the foundation and other donors like the Loudermilks, the law school has the ability to offer more than 20 full-tuition scholarships and professional development stipends to some of the most academically gifted students at the law school. Of note, Kurtz served for several years as a Senior Foundation Fellow, mentoring undergraduates in the program and helping to select fellowship recipients.