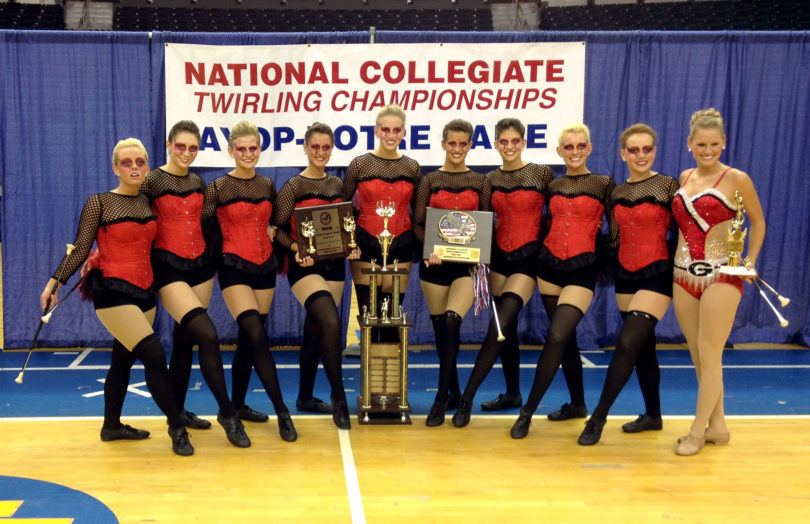 Athens, Ga. – The University of Georgia majorettes may have recently won two national titles-along with UGA sophomore Nicole Jensen of Iowa City, Iowa, being named female college feature twirler champion—but it’s the two third-place wins that have them most surprised.

The UGA majorettes, a part of the university’s Redcoat Marching Band, were named the 2012 Collegiate Halftime Show Twirl National Champions and Collegiate National Halftime Champions at the America’s Youth on Parade USA and World Twirling Championships in South Bend, Ind., in mid July. They also landed a third place finish in open dance twirls for senior small and senior large.

“I don’t think the girls realize that these teams have been competing together for years and almost every weekend,” said Ashley Clark, head majorette instructor. “For a college majorette line to beat some of the best teams in the nation says a lot about our group.”

Twirling groups from across the U.S. can enter the open dance twirls competitions, which means that the UGA majorettes were up against teams who practiced specifically for competitions-and don’t have to prepare a different routine for each time they march into a stadium for halftime performances.

“It was probably the best week we have had,” Clark said of the competition. “To get two titles and third in the open division is unheard of, especially since we’re competing with any twirling group across the nation. We came in third to two groups who go to the international championships.”

The UGA majorettes also received the WOW award presented to the most entertaining college majorette line.

“The wins have made all the practice hours, all the sweat, all the time we spent together come together,” said team captain Angel Flournoy, a senior from Jesup. “The feeling was indescribable.”

On an individual level, Jensen had a standout performance at the competition, beating out 62 other contestants to become female college feature twirler champion. Additionally, she placed first in the world open strut championships and sixth in Miss Majorette of America, with a first place finish in the model portion.

“I think all the bonding time that we had really made us a better team,” Flournoy said. “When we practiced, we learned things about each other. It just made us come together as one.”

“Nationals has brought these girls really close together,” Clark said, “so I’m looking forward to them working real hard during football season. It’s always hectic this time of year, but football season will be fun.”