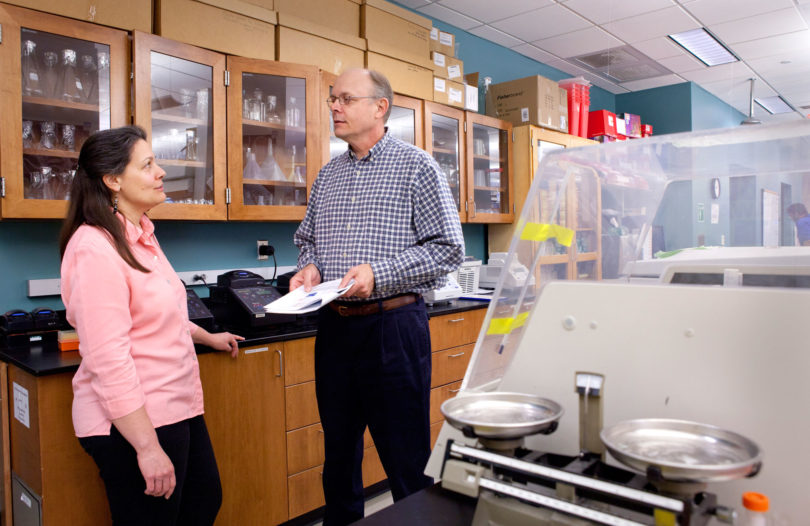 Julie Moore and David Peterson discuss finding from their recent study of placental malaria. Moore and Peterson are researchers with the UGA College of Veterinary Medicine.

Athens, Ga. – Half the world’s population is at risk for contracting malaria. The deadly disease, spread by hungry mosquitoes that bite humans for their blood meals, affects more than 200 million people each year, and many people-mostly children-die.

A pair of recent University of Georgia studies shed light on some of the intricacies of the disease and uncovers some of the roadblocks to effective treatment and targets for a malaria vaccine. The results of these studies were recently published in the Public Library of Science journal PLoS ONE.

Malaria causes low birth weight, which contributes to infant death, but the reasons for this have been clouded with uncertainty despite intensive research. Because of this, University of Georgia College of Veterinary Medicine researchers Julie Moore and David Peterson decided to study placental malaria and, more specifically, placental parasites from women living in western Kenya, where malaria is widespread.

Babies aren’t typically born infected with malaria, but their mother’s response to the parasite retards their development inside the womb.

“Excessive blood clotting in the malaria-infected placenta has been observed for a hundred years,” said Moore, a professor of infectious disease with the UGA College of Veterinary Medicine. “This research showed a direct association between malaria, clotting and poor birth outcome.”

As part of her research, Moore used anticlotting medications in mice infected with malaria. Usually the mice would spontaneously abort their pregnancies. With the medications being tested, the embryos survived.

Malarial parasites invade red blood cells. Within 48 hours they mature, break out of the infected cells and invade new cells. This growth cycle is synchronized, causing cycles of fever and aching sensations. In red blood cells, parasites eat hemoglobin and create iron crystals with the excess minerals. This indigestible material called malarial pigment is released when the parasite emerges from the cell and stimulates the immune system, said Peterson, an associate professor of infectious disease in the veterinary college. It also accumulates in the infected placenta, promoting placental damage.

All malaria parasites are not identical. Each parasite has specific proteins that act like glue, allowing it to infect different parts of the body. The protein that allows parasites to accumulate in the placenta is called VAR2CSA.

Each parasite has 60 genes that code for the adhesion proteins, and many variations are found in nature. Although “there is only one gene that codes for VAR2CSA,” Moore said, she and Peterson discovered up to 11 possible variations of VAR2CSA in a single infected placenta.

“Malaria has antigenic variation,” Peterson said. “And it is really good at it.”

Antigenic variation is the process by which an infectious organism alters its surface proteins in order to evade host immunity. For a vaccine to work, the immune response will have to recognize all of the variants. This is a significant challenge for vaccine development.

Despite the difficulty, Moore and Peterson said a vaccine is necessary to ultimately control this disease.

“Vaccination is the best way to prevent infection,” Peterson said. “Just using medicines to kill the parasite doesn’t stop the body’s reaction to the infecting parasites or protect against future infections.”

It may seem paradoxical, Moore said, but much of the damage in placental malaria is caused by the patient’s immune response to the infection. Malaria promotes inflammation, which can be effective in fighting the infection. But if this response is excessive, then there is unwanted tissue damage, including the blood clotting observed in the placenta.

“We need to understand what promotes such inappropriate responses and develop ways to help the body fight infection while avoiding tissue damage,” Moore said. “While we await a preventative vaccine, we need to find adjunctive therapies to control inflammation and coagulation, while still killing the parasite.”

The research revealed important clues for a preventative VAR2CSA-based vaccine. Several amino acids in the protein that are important in immune evasion showed limited capacity for change. This implies that some parts of VAR2CSA must remain constant to retain its function. These are potential targets of an effective vaccine against VAR2CSA.

“What has attracted most of us to parasite and pathogen research is they are purely fascinating,” Peterson said. “Switching genes (by the pathogen) is frightening-and brilliant.”

While the millions of women infected in sub-Saharan Africa each year stand to benefit from this research, medical advances that enhance the quality of life worldwide also have economic benefits.

“Given the globalization of our economy, we endeavor to manufacture and sell our products all over the world,” Moore said. “There is a close connection between disease and suppression of economies. If people are spending less on their health, they will have more money to buy products we want to sell.”

Malaria alone contributes to at least a billion dollars in lost economic capacity each year.