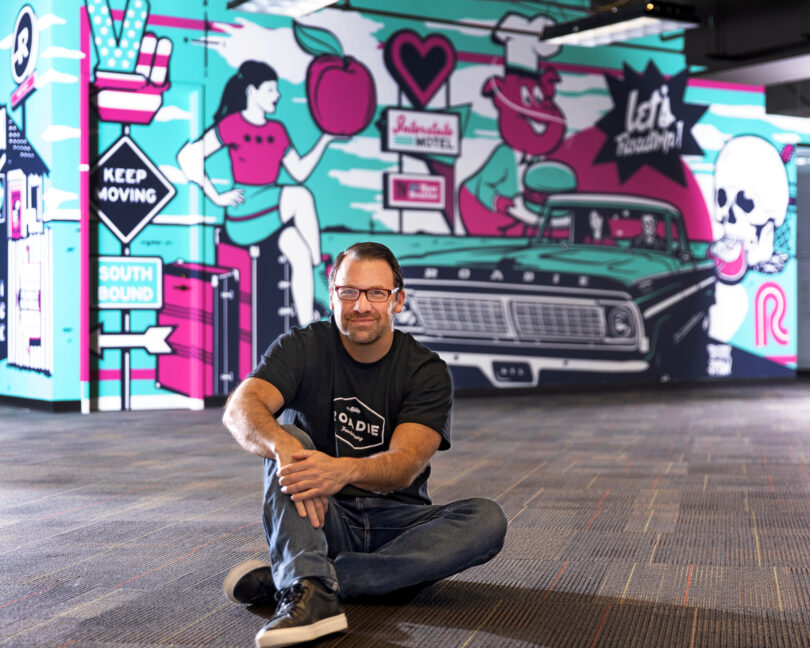 Roadie. a crowdsourced delivery platform, is just the latest of Marc Gorlin's ABJ '95 entrepreneurial endeavors. His successes earned him recognition in 2021 from Ernst & Young, which named him as an Entrepreneur of the Year.

Aspiring entrepreneurs can obsess over what skills might yield their startups’ successes.

For Marc Gorlin, the founder and CEO of Roadie who was recently named a 2021 Entrepreneur of the Year by Ernst & Young, his most valuable ability has always been storytelling.

It’s where everything starts.

“If you can’t get people to believe and come along with you, then you don’t have anything but yourself and a silly idea,” says Gorlin ABJ ’95.

Gorlin’s success story has brought along plenty of believers.

The journalism graduate has appeared on UGA’s Bulldog 100 list of fastest-growing alumni-led businesses seven times. He earned the No. 1 spot in 2015 with Kabbage, which he co-founded in 2009. And in all five of his startups, Gorlin has perfected his elevator pitch with simplicity, practicality, and a helping of Southern wit.

Here’s how he explains Roadie, a crowdsourced delivery platform that tapped into a need so obvious it’s stunning that no one else thought of it first.

“There’s this unbelievable natural resource: all of us who go everywhere—250 million passenger vehicles hit the road every day with almost 4 billion cubic feet of excess capacity,” he says.

“So what would happen if you could put some of that wasted space to use? That’s more vehicles than UPS, FedEx, the Post Office, and all the couriers you could slap together combined.

“That’s how we created Roadie, which matches up big businesses, small businesses, you and me, people with stuff to send, with drivers who are ideally already going in that direction.”

Charles Davis MA ’92, dean of the Grady College of Journalism and Mass Communication, was at the Bulldog 100 celebration in 2015 when Gorlin took first place. And they’ve kept in touch ever since. For Grady College, Gorlin has been an ambassador for the practicality of journalism education, which has become the backbone of his entrepreneurial career.

“He’s constantly reminding me that building, pitching, and inspiring investors and employees comes down to strong storytelling,” Davis says, “and that he learned those skills at Grady.”

“Everything about telling a story—written, spoken, defending it— just got tighter,” Gorlin says.

In 2015, Roadie got a major publicity breakthrough.

Still in its infancy, the startup found a reputable partner to serve as a drop-off location—one that was ubiquitous in the South (where Roadie was getting its start) and open 24 hours a day.

Who else but Waffle House?

That peculiar partnership between a tech company and a blue-collar restaurant raised some eyebrows. During a news interview about the pairing, a reporter asked Gorlin, “Why would you ever do this?”

Gorlin now admits that he was exhausted after a long day of such questions from reporters and let his “inner redneck come out a little.”

Instead of his scripted answer, Gorlin ad-libbed, “Well, if you live in the South, you can’t throw a dead cat without hitting a Waffle House.”

That quote made its rounds through media outlets and eventually to writers at the Jimmy Kimmel Show. Based on Gorlin’s off-beat remark, Kimmel did a minute-long piece about Roadie, bringing the business to the attention of a national audience. That exposure came at a critical time in Roadie’s growth. And the company hasn’t looked back.

When the pandemic hit, “when everybody wanted everything delivered,” as Gorlin puts it, Roadie was well suited to respond to the breakdown of supply chains. The growth was remarkable.

On the heels of that success, UPS acquired the company in 2021; and Gorlin still gets to run it as an independent operation.

“As a founder, I want to build something that lasts,” he says.

Roadie is now part of one of the biggest shipping networks worldwide.

Gorlin says his kids can use his company for years to come. “And that’s pretty cool.”

For this next chapter in Roadie’s narrative, Gorlin himself couldn’t have scripted a better story.