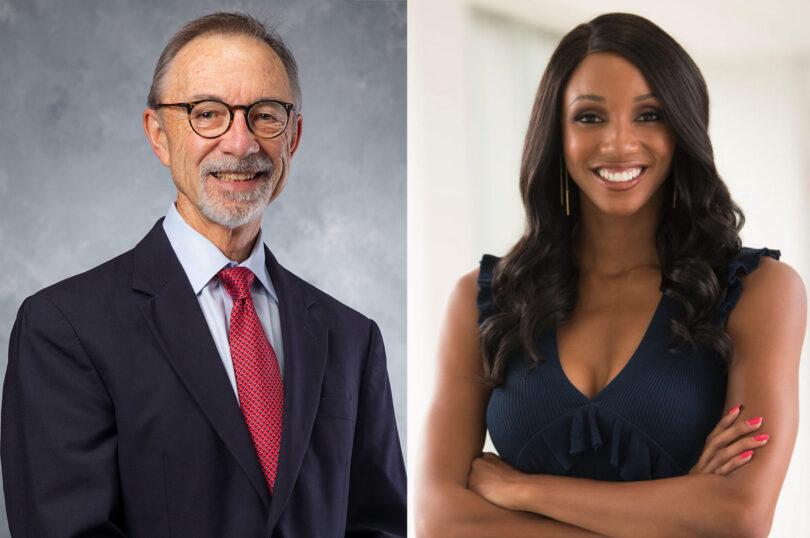 Spring 2021 Commencement speakers are Maria Taylor for the undergraduate ceremony and David Lee, Vice President for Research at the University of Georgia, for the graduate ceremony. (Submitted/file photos)

Retiring VP of Research to give the graduate Commencement address

ESPN reporter and UGA alumna Maria Taylor will deliver the University of Georgia spring undergraduate Commencement address. Her live remarks on May 13 at 7:30 p.m. in Sanford Stadium will be recorded and shared with graduates at the May 14 and May 15 ceremonies.

David Lee, Vice President for Research at the University of Georgia, will deliver the address at the graduate ceremony on May 14 at 10 a.m. in Sanford Stadium.

Since graduating from UGA in 2009 with a degree in broadcast news from the Grady College of Journalism and Mass Communication, Taylor has risen through the ranks of sports journalism and is now in her seventh season as an analyst, host and reporter for ESPN. She later returned to the university to pursue her Master of Business Administration, which she completed in May 2013.

A native of Alpharetta, Taylor played collegiate volleyball and basketball for UGA. She was named to the All-SEC volleyball team three times and was also a member of the USA A2 National Volleyball team.

Prior to 2012, Taylor was a reporter and host for IMG College (now Learfield IMG College) at the University of Georgia for three years. She also appeared on various studio shows including “Dawg Report,” “SEC Men’s Basketball Tonight” and “SportsNite.”

Taylor became the first African American woman to co-host College GameDay Built by The Home Depot in 2017. She was also tapped as the sideline reporter for ABC’s “Saturday Night Football.” She patrolled the sidelines for the College Football Playoff and National Championship games from 2018 through 2021. She previously served as the first female host of the SEC Network’s traveling college football show, “SEC Nation.” Prior to her role on “SEC Nation,” she helped launch the SEC Network as one of three studio hosts and worked as the SEC Primetime Saturday Night college football reporter.

Taylor also co-founded Winning Edge Leadership Academy, a nonprofit dedicated to improving networking opportunities and providing training and professional development to people of color and women pursuing careers in the sports industry. Since 2015, the academy has helped more than 40 students to become the next generation of leaders in sports business.

From 1983 to 1985, he was a senior scientist at Oncogen, a pharmaceutical company that was acquired by Bristol Myers Squibb during this period. In 1985, Lee joined the University of North Carolina at Chapel Hill as a member of the Lineberger Comprehensive Cancer Center and a faculty member in the Department of Microbiology and Immunology. In 1991, he was appointed Scientific Program Leader for Cell Biology in the Lineberger Comprehensive Cancer Center, and he was appointed the head of the Department of Biochemistry and Biophysics in 1998.

In 2005, Lee moved to the University of Georgia to become the vice president for research and executive vice president of the UGA Research Foundation, with an appointment as a professor of biochemistry and molecular biology.

Lee has overseen a period of significant growth in research activity at UGA, with the university’s total research and development expenditures increasing from just over $300 million to nearly $500 million.

He has encouraged the expansion of research centers, including the Willson Center for the Humanities and Arts, and championed the growth of biomedical sciences, with UGA emerging as a national leader in infectious disease research.

Under Lee’s leadership, UGA has developed an efficient and effective technology transfer program and has been consistently ranked as one of the nation’s top universities for the number of commercial products reaching the marketplace. In addition, Dr. Lee co-led the university’s Innovation District Task Force and serves on the Innovation District leadership team.

He has served on the boards of several national organizations, including the Southeastern University Research Association, the U.S. Department of Energy’s Center for BioEnergy Innovation and Oak Ridge Associated Universities. He was elected a Fellow of the American Association for the Advancement of Science in 2004.

For guests who are deemed at increased risk for severe illness from COVID-19 by public health officials or would like to view Commencement ceremonies remotely, the ceremonies will be streamed live at commencement.uga.edu.

Tickets are required for all ceremonies. The university’s Clear Bag Policy will be in effect. For more information on UGA’s Commencement ceremonies, visit https://commencement.uga.edu.