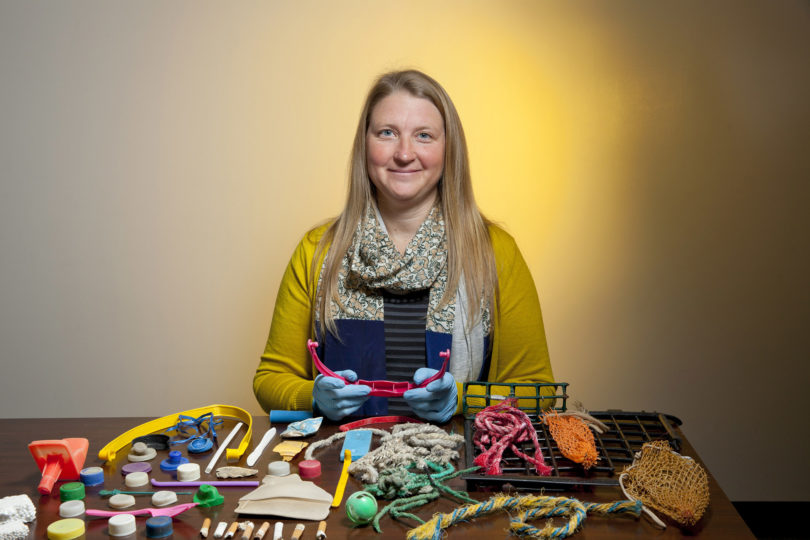 Athens, Ga. – University of Georgia assistant engineering professor Jenna Jambeck usually isn’t surprised when an email telling her the smartphone application she created in collaboration with the National Oceanic and Atmospheric Administration—Marine Debris Tracker—has been mentioned in social media. But the tweet including it on June 2 caught her completely off guard.

Her app had just been featured in a video in front of thousands at Apple’s Worldwide Developers Conference in San Francisco. The global tech giant kicked off its 25th annual event with a promotional piece on “Apps We Can’t Live Without.”

Marine Debris Tracker was one of those apps.

“I click the link (in the email) that takes me to a tweet by the tech columnist for USA Today, Jefferson Graham,” said Jambeck, an environmental engineer in the UGA College of Engineering who specializes in global waste management.

“He says, ‘#Paper, Instagram, Tumblr, Evernote. Marine debris tracker, Pinterest, Tinder, Candy Crush, apps touted’ at the beginning of the Worldwide Developers Conference. I think it must be a typo.”

She spent several hours verifying the message Graham had posted on Twitter. About 9 p.m., after finding a link on Mashable, she sat down with her five-year-old son Bodey and finally saw Apple’s video.

Toward the beginning of the five-minute “Apps We Can’t Live Without” piece, oceans advocate Emily Penn names two of the apps she uses aboard Pangaea Exploration’s sailing expedition vessel Sea Dragon. The first is marine navigation tool iNavX. The second is Jambeck’s app.

“Marine Debris Tracker,” Penn said in the video, “allows you to enter the debris that you find into a global database so that we can start to build up a bigger picture of this problem around the world. I think these apps are essential for us to be able to bring change to what’s going on in the ocean.

“The ocean, for me, is the lungs of our planet. The health of the ocean is absolutely essential to the health of us, as human beings.”

When the video was over, “Bodey turned to me and said, ‘Mommy, your app is making the world better,'” Jambeck said. “I pretty much lost it then.”

Jambeck developed the Marine Debris Tracker app with Kyle Johnsen, also an assistant professor in the College of Engineering and a computer systems engineer. It went live on Apple’s App Store and the Android Market in 2011.

Designed to allow its users to track and report trash and other debris found anywhere, the app has been downloaded 10,000 times and currently has close to 700 registered users, 15 to 20 who report debris on a near-daily basis. Its 32,899 data points—entries which total about 345,000 individual pieces of trash—include anything from 15,500 cigarette butts found by users on St. Simons Island to plastic jugs floating in the ocean off the coast of Costa Rica and plastic bags near the coast of Brunei.

When users submit an entry, the smartphone automatically adds GPS coordinates, which help give Jambeck a more accurate picture of where her “citizen scientists” are reporting from, she said.

“It’s one of the best citizen scientist apps that exists,” Johnsen said. “We’re building community around a particular topic.”

Since Penn mentioned the app on June 2, Jambeck and Johnsen have noticed several new entries in parts of the world they hadn’t been able to reach before, including three entries in Iran. Most of the app’s previous users reported debris in the U.S., and one of the most active users is tracking trash near waterways in Omaha, Nebraska.

“One of the things I like to emphasize is that we’re not just tracking ocean debris,” Jambeck said. “Any litter can make it to the ocean, and some of our more recent data came from North Dakota.”

The free app has the capability to run on smartphones or tablet devices. It was designed as an outreach and education piece, Jambeck said, with the hope that people who were using it would be less likely to contribute to the growing global trash problem.

As for Penn, the oceans advocate featured in the Apple video, Jambeck has been in Twitter conversations with her and hopes to one day meet her in person.

Marine Debris Tracker is a joint partnership of the NOAA Marine Debris Program and the Southeast Atlantic Marine Debris Initiative, located within the UGA College of Engineering. For more information, see http://www.marinedebris.engr.uga.edu/.

Apple’s “Apps We Can’t Live Without” video is available at https://www.youtube.com/watch?v=EBSU9KaCYP4.