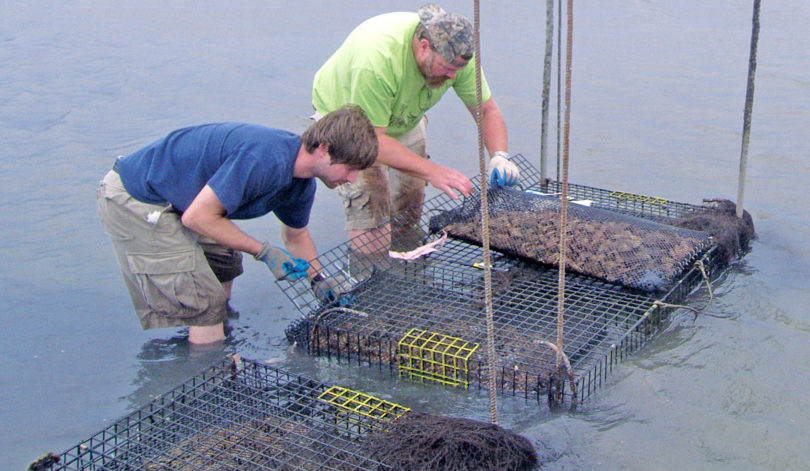 This fall, the Shellfish Research Laboratory at the UGA Marine Extension and Georgia Sea Grant, public service and outreach units at UGA, plan to launch the state’s first oyster hatchery on Skidaway Island.

The hatchery will provide growers with a stable supply of oyster spat­—the larvae that attach to a hard substrate and enter the sub-adult and adult stages—as well as technical guidance for a sustainable harvest of single oysters.

In the early 1900s, the sweet Georgia oyster was king. The state led the nation in oyster landings, most of which was canned. By the 1940s, the oyster industry had dramatically declined for a variety of reasons, with the last shucking houses closing in the 1960s. ­Fishermen who continued to harvest primarily supplied oysters for local backyard roasts.

Today, the industry is poised for a comeback with the launch of Georgia’s first oyster hatchery at the Marine Extension and Georgia Sea Grant. UGA’s efforts will make the Georgia oyster industry more durable, contribute to aquaculture diversification and elevate one of Georgia’s best-kept culinary secrets from the backyard roast to the tables of the finest restaurants from Savannah to Atlanta and beyond.

The hatchery project, funded by the Georgia Department of Natural Resources Coastal Management Program, will be a collaborative effort. UGA is sharing spat and guidance with participating growers, and in return growers will share their experiences and data. Finally, UGA will bring in seafood distribution companies to educate them about the Georgia product.

Wild Georgia oysters grow in muddy clumps, due to high natural recruitment rates and the resulting competition for food and space. The shells are brittle with sharp edges, yet none of this takes away from the flavor of the meat, often described as sweet with a hint of lemongrass.

“One of the goals of the oyster hatchery is to produce an attractive, easy-to-open single oyster that can be marketed to upscale restaurants,” said Thomas Bliss, director of the Shellfish Research Laboratory.

The Shellfish Lab has conducted oyster research in single-oyster cultivation going back more than 30 years based on wild harvest of oyster spat. However, wild spat harvest proved to be too labor-intensive to sustain a robust oyster industry. Bliss and Justin Manley, aquaculture extension agent, determined that cultivating single oysters in a hatchery is the most viable solution.

“We are applying grow-out techniques based on research pioneered by UGA scientists to implement this project,” Manley said.

In 2014, the Shellfish Lab distributed wild oyster spat to local fishermen as part of a three-year study of single oyster grow-out methodology. During the project, wild spat was distributed to growers to give them an opportunity to get their hands wet and to learn how to work with spat in preparation for the hatchery launch.

The research was funded by the National Sea Grant Aquaculture Funding Initiative.

The hatchery is one of several ways UGA is working to raise awareness of local seafood through initiatives such as the Georgia Seafood Directory, which re-launched with a new design this spring.